Suspect Alek Minassian can be seen brandishing what appears to be a gun and screaming at the officer to "shoot him in the head". 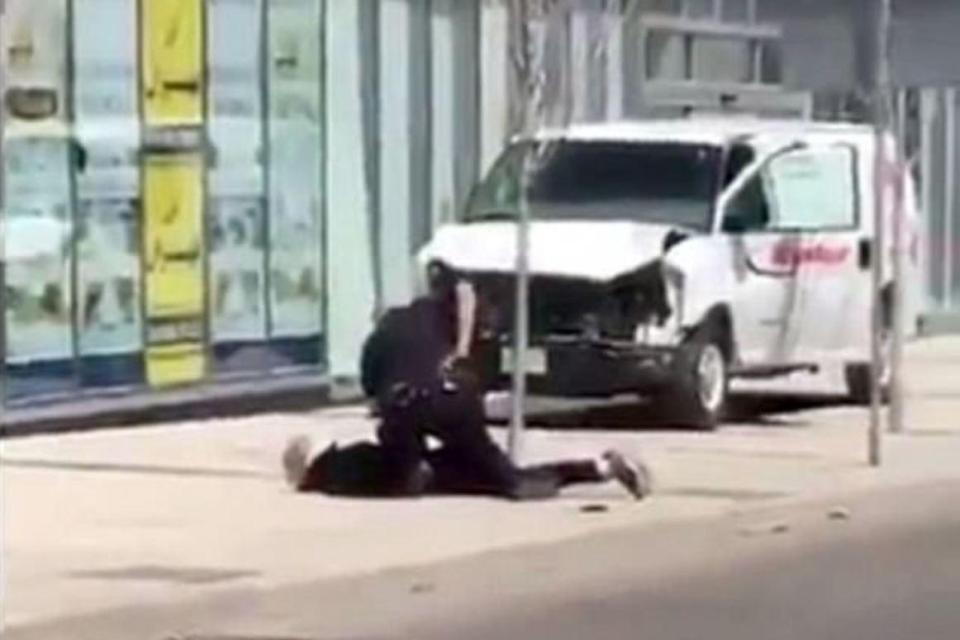 But the hero cop refused to shoot the rampage driver and instead repeatedly ordered him to "get down".

It came just moments after the socially awkward tech student "deliberately drove a van down a Toronto pavement killing ten people and injuring another 15".

The video begins with the siren wailing and a police officer just 30 feet away, crouched behind a car, gun drawn, yelling.

Suddenly, the van door swings open and a black clad Minassian steps out pointing what looks like a gun at the brave cop. 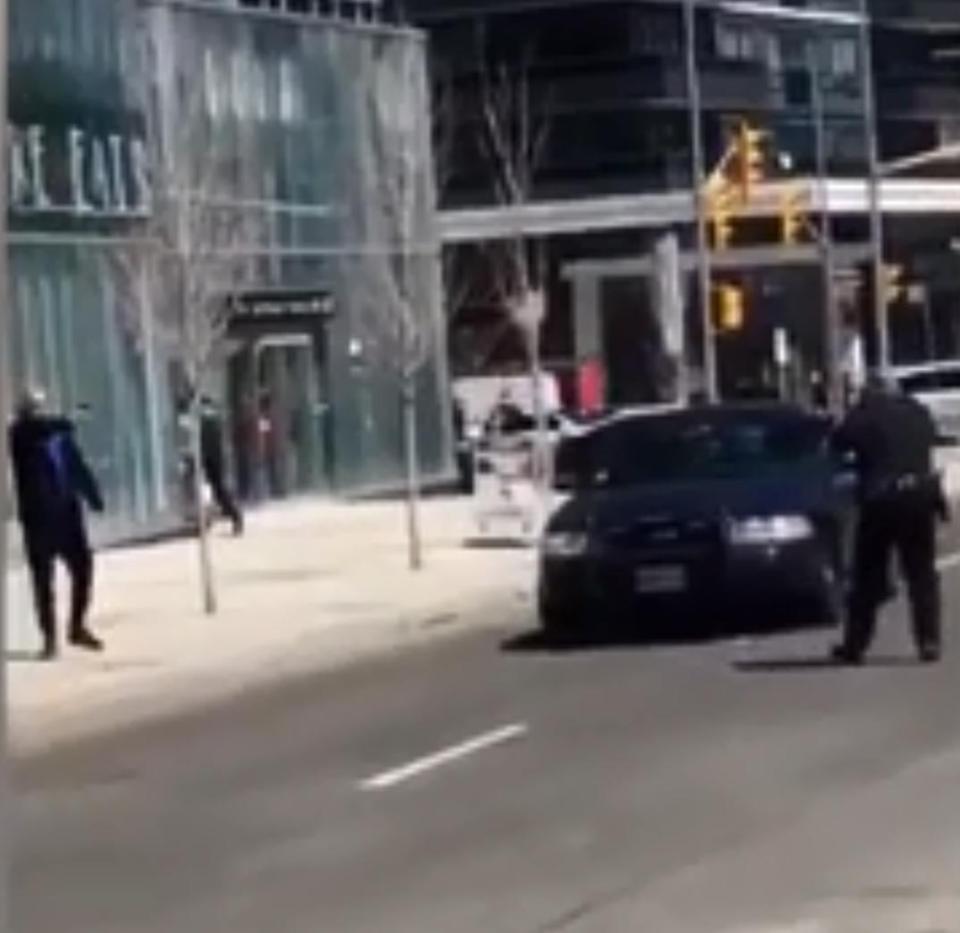 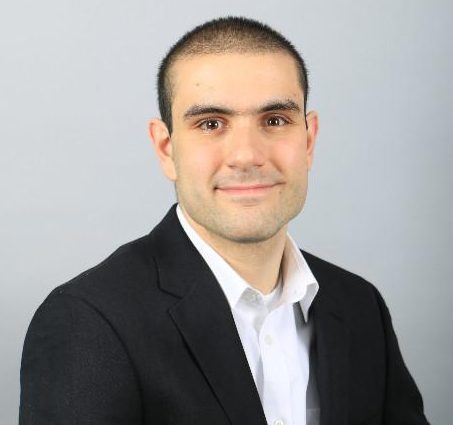 The two start shouting at each other but the sound is muffled by the siren — except for the words “get down”.

The 25-year-old keeps his weapon pointed, quick-drawing the gun, as the officer turns the siren off. He keeps yelling, “C’mon get down.”

Then, the suspect, responds with the demand, “Kill me.”

But the cop won’t fire instead saying: “No, get down.” 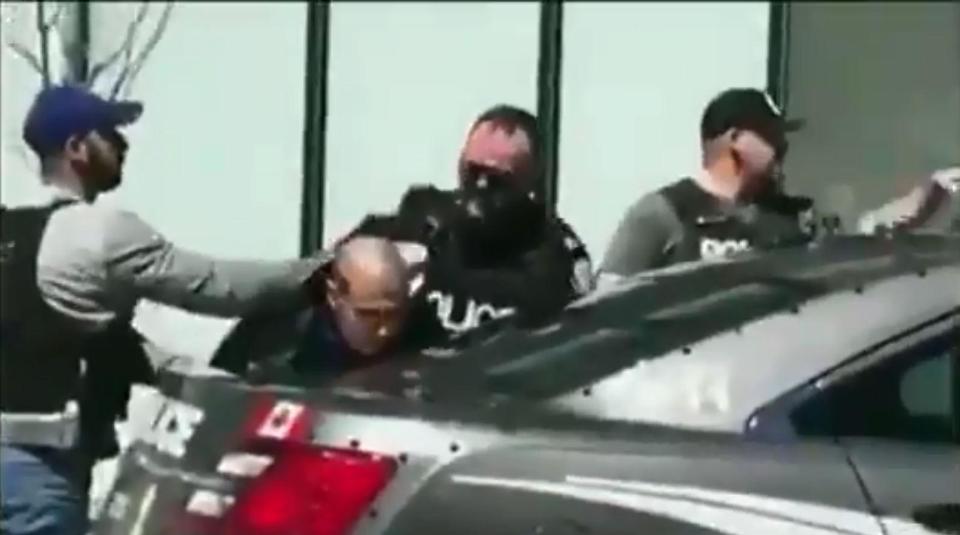 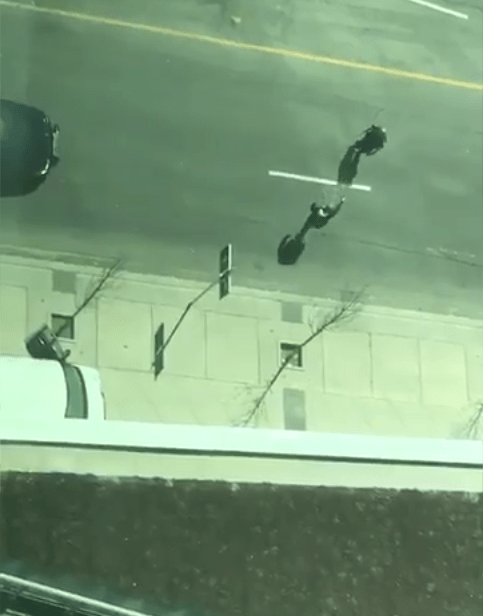 “I have a gun in my pocket,” the driver says, urging the officer to “shoot me in the head” as he walks towards him, gun pointed straight at him.

But the officer continues to inch forward repeatedly telling Minassian to get on the ground, refusing to discharge his weapon.

Eventually he appears to toss the object to the side and brave cops pin him down following the tense 37 second exchange.

Ariel footage also showed the officer facing down the suspect and him eventually tossing his gun aside and being pinned to the floor. 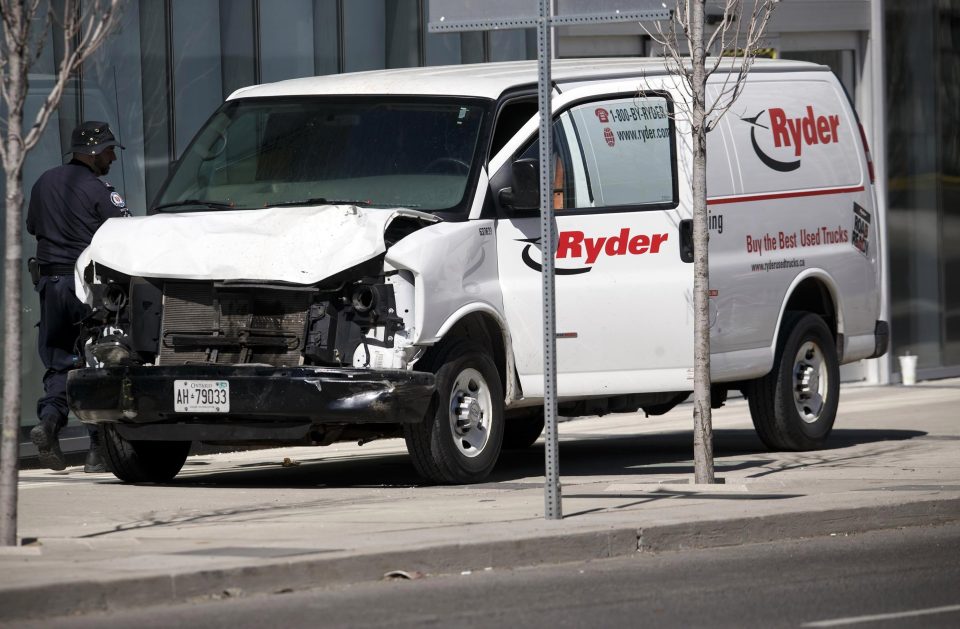 What we know so far:

President of the Toronto Police Association Mike McCormack praised the officer for his bravery.

He said he had come face-to-face with a man who was “making like he has a weapon, threatening the officer’s life, trying to get the officer to shoot him”.

McCormack told reporters: “The officer would have been doing a continual threat assessment.

“This officer looked at what was going on and determined he could handle it the way that he did. People are right — this guy is a hero.”

The Police chief added that the cop in question told him afterwards that he was “just doing his job”.

He continued: “That’s what everyone’s thinking: Great, he did his job and arrested this guy and may have prevented further deaths.

“But he’s more concerned with 10 people being dead, 15 people being injured, why now and what’s happening in this city.

“I think the full impact of how horrible this whole thing is just setting in on our people now.

“Like, this is crazy, this is insane, we’ve never seen this.”

Toronto Police Chief Mark Saunders later identified the suspect as Minassian, adding that he had not previously been known to authorities and they do not know his motives.

A LinkedIn profile, described him as a student at Seneca College and from Richmond Hill, a northern suburb of the Canadian city.

It also listed him as a software developer who was working on a number of apps including one to find parking spots in the area.

Joseph Pham, 25, who took a computer programming class with Minassian at Seneca, told The Star he was at school just last week and described him as “socially awkward.”

He said: “He kept to himself. He didn’t really talk to anyone." 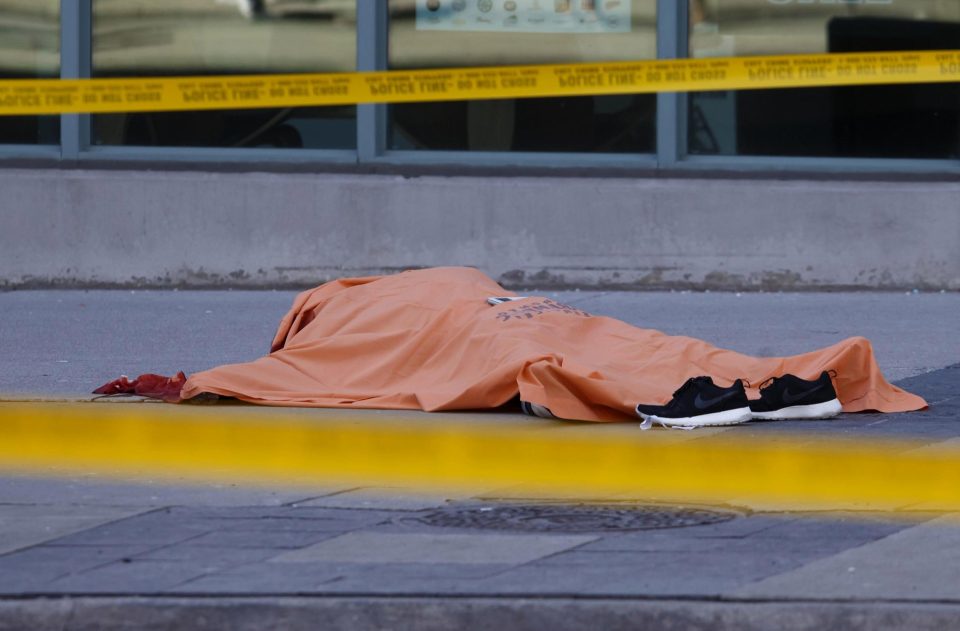 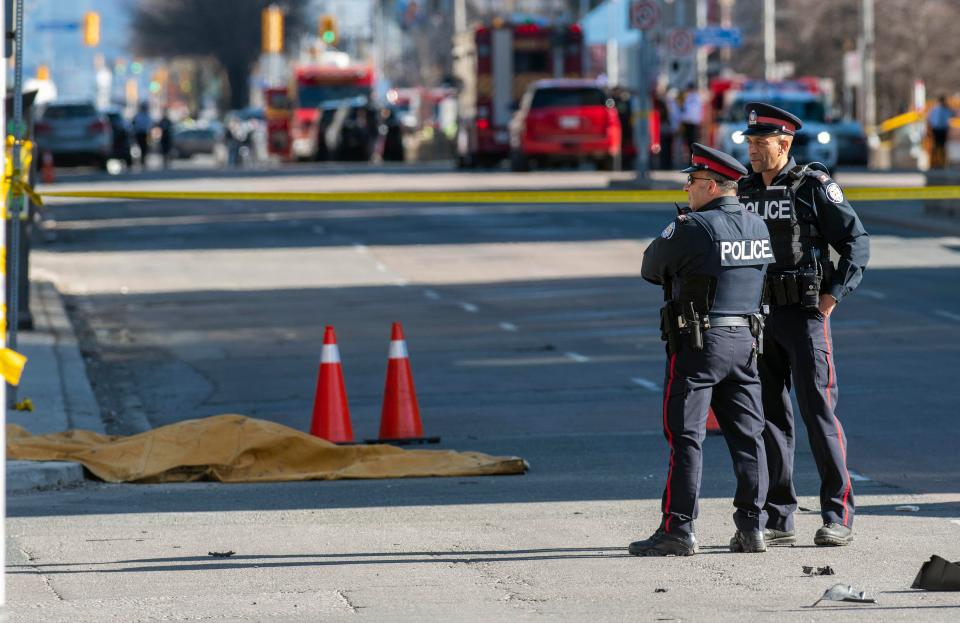 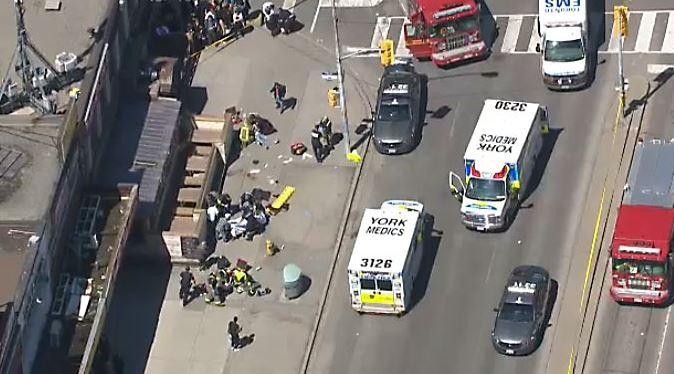 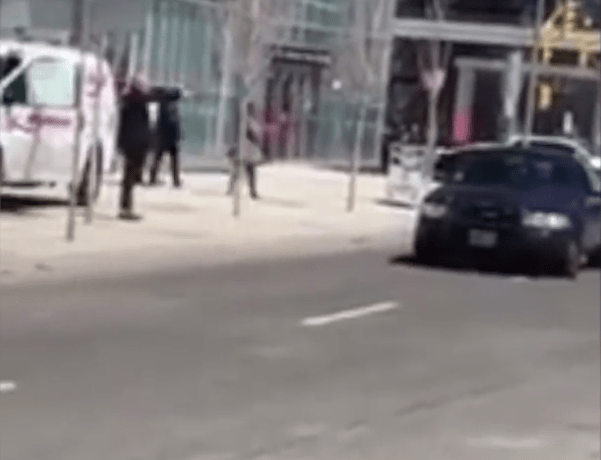 Another classmate said he had a "significant social or mental disability" claiming he had several physical ticks including shaky hands and tapping his head.

He added that he didn't think Minassian knew how to drive claiming he "wouldn't know how a steering wheel works".

Minassian is reportedly not believed to be linked to any terror groups, but a Facebook post apparently written by him referred to the "Supreme Gentleman Elliot Rodger," CBC reports.

Rodger, 22, was responsible for a deadly rampage in Isla Vista, Calif., that left six people dead and a dozen more injured in 2014. 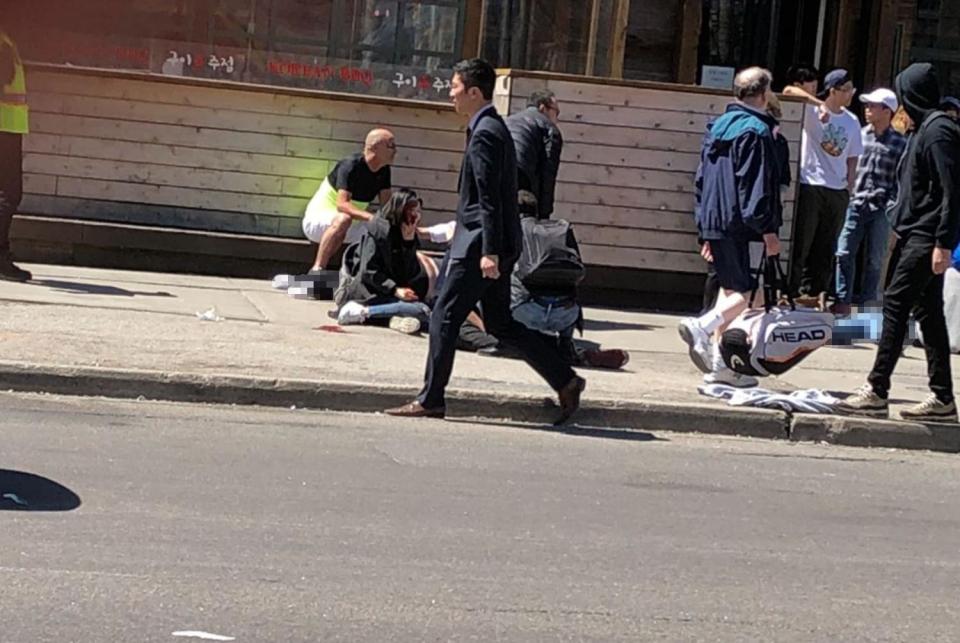 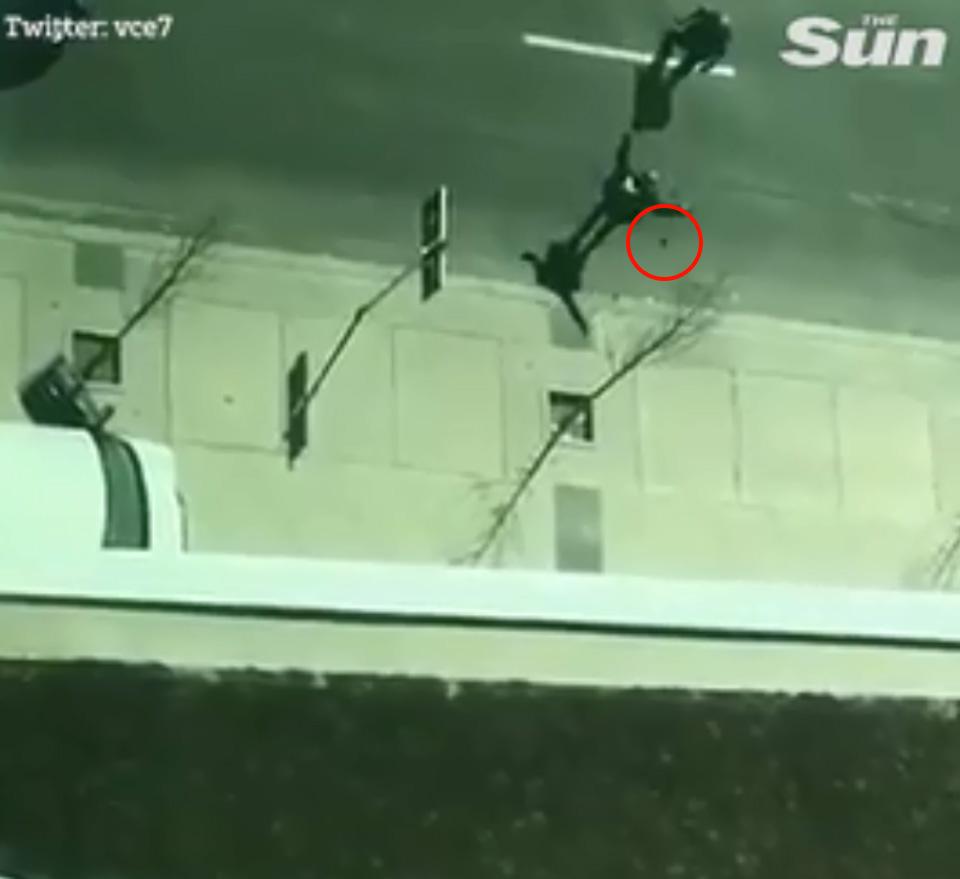 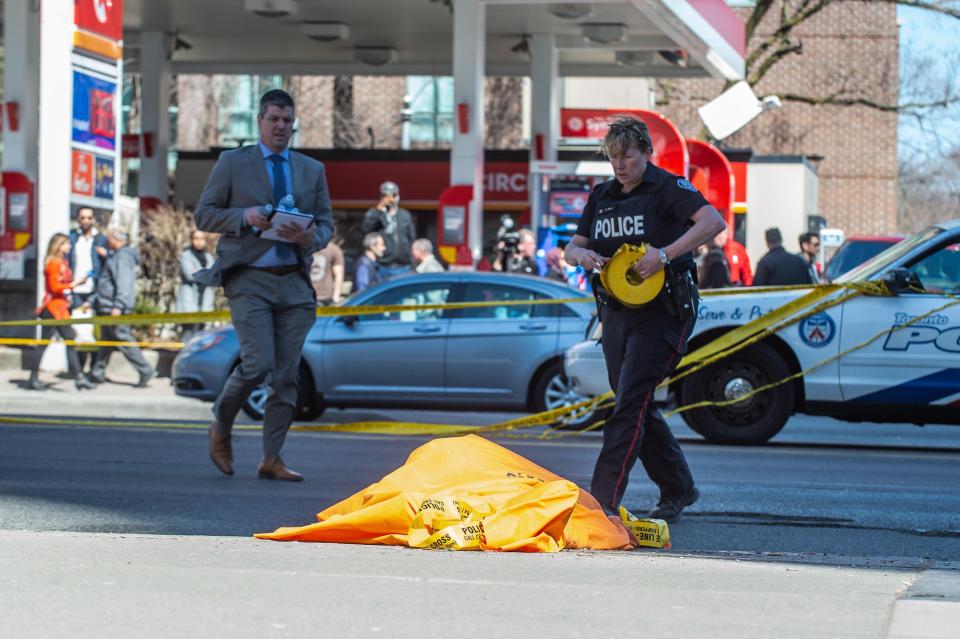 Witnesses described the attack as "a war zone" after the white rental truck wrought death and destruction driving at up to 70mph for a mile along the busy street.

A woman pushing a stroller and elderly members of the public were among those flung into the air by the speeding rental truck at 1.30pm local time (18:30 GMT) yesterday.

Uber Driver Jalal Faghihi told MacLean's Canada: "The car was swerving on the road. It hit a street sign and lost its bumper.

"After it hit the two people, it pulled back onto the road and did the same thing on another part of the sidewalk.

"It was doing a zig-zag. Hit and go, hit and go, it didn’t stop. He just kept going.

"There was a lot of noise. My window was down—people were screaming.

"It was unbelievable, but some people have mental problems and want to do something crazy, or maybe it was some terrorist organisation wanting to cause chaos."

One witness told CNN the driver appeared to have been targeting people during the lunchtime rush.

He said: "This person was intentionally doing this, he was killing everybody. He kept going, he kept going. People were getting hit, one after another."

Another said he saw people "strewn all over the road" while one bystander claimed the driver appeared "in control" of the vehicle as it hit pedestrians. 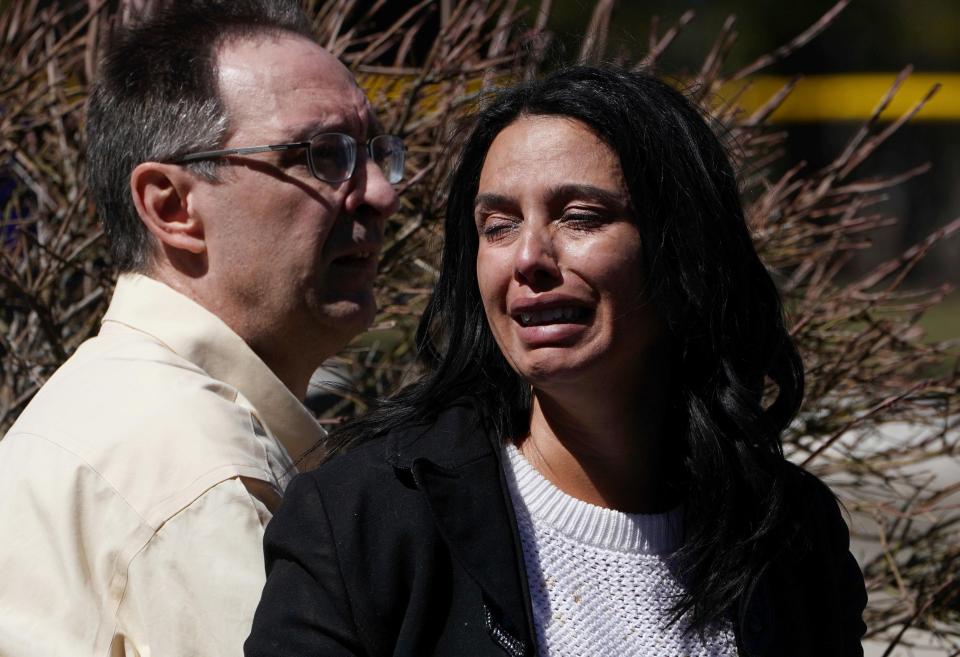 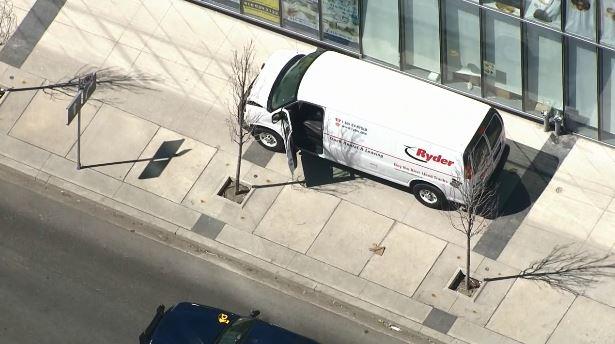 The bloodbath on Monday unfolded just 18 miles from G7 ministers, including Foreign Secretary Boris Johnson, who were meeting to discuss terrorism and cyber security.

Footage from bystanders show dozens of pedestrians gathering victims who were hit by the vehicle. 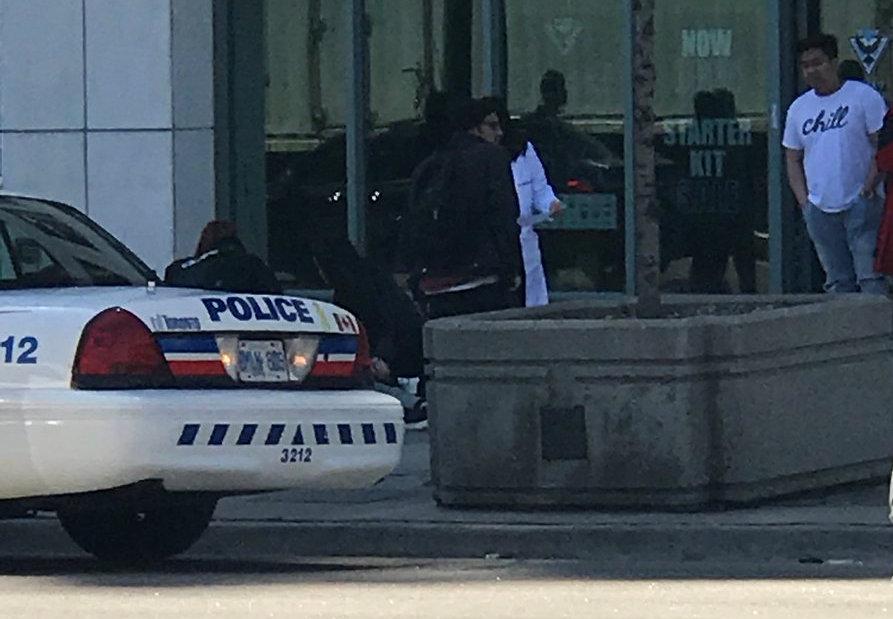 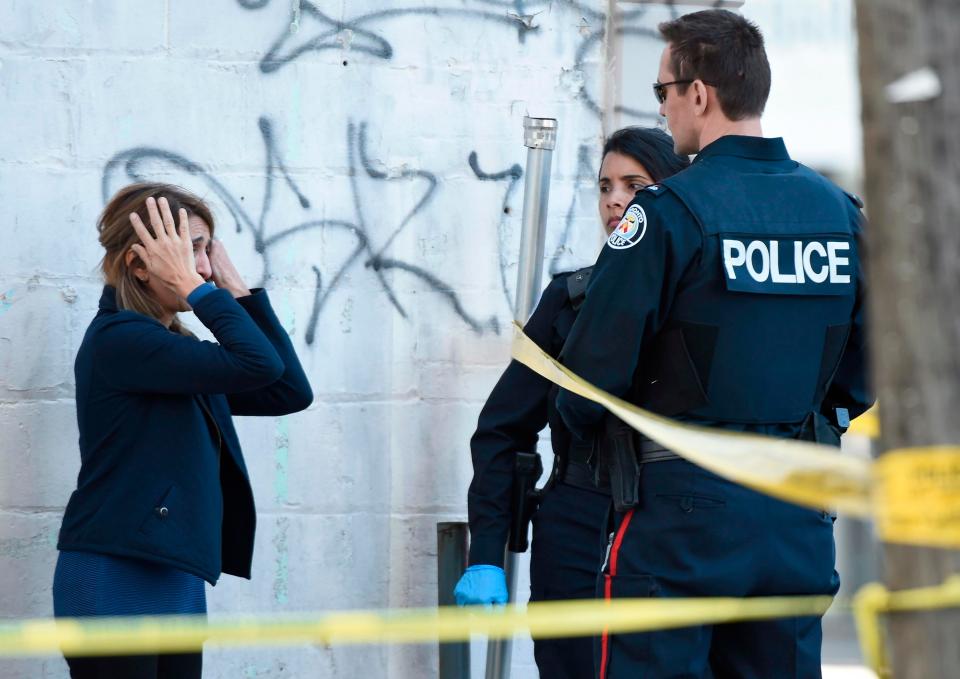 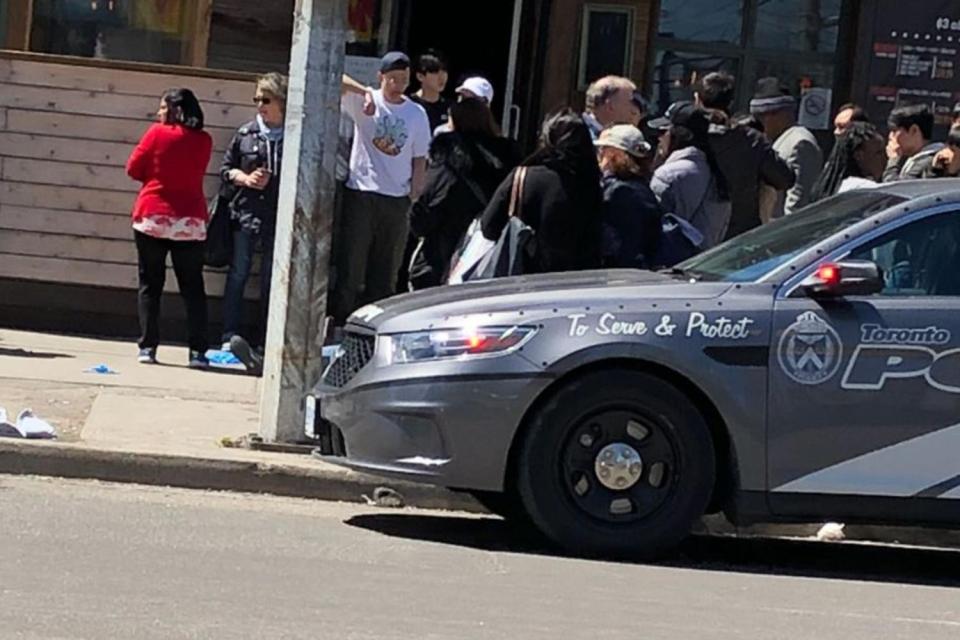 Buildings and workplaces in the surrounding area have been put on lockdown while nearby subway stations were closed.

Cops have since cordoned off the southbound lanes of Yonge Street and have urged locals to avoid the area.

According to CBC one eyewitness said he had seen at least four bodies lying covered on the ground. 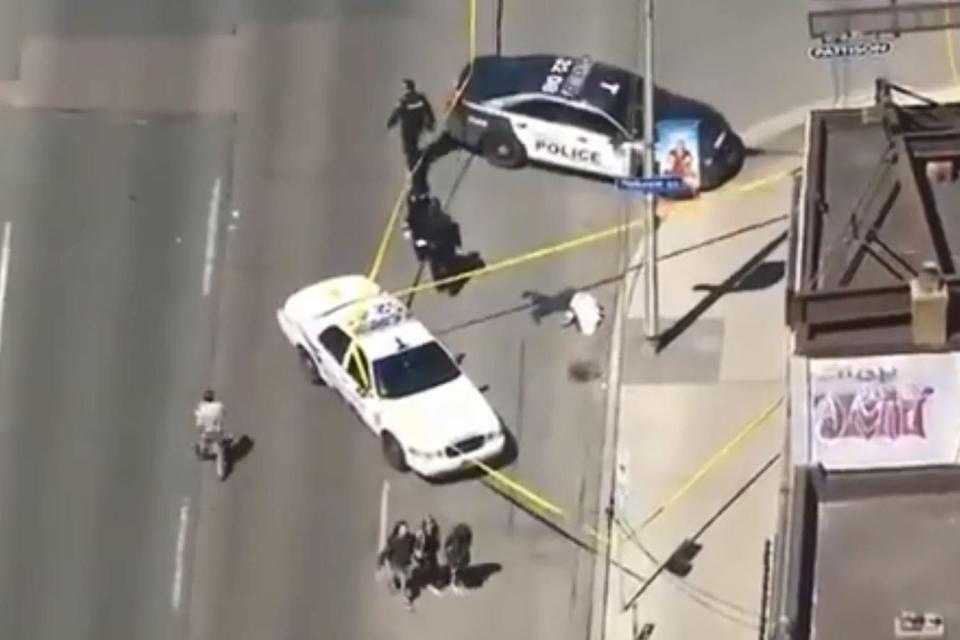 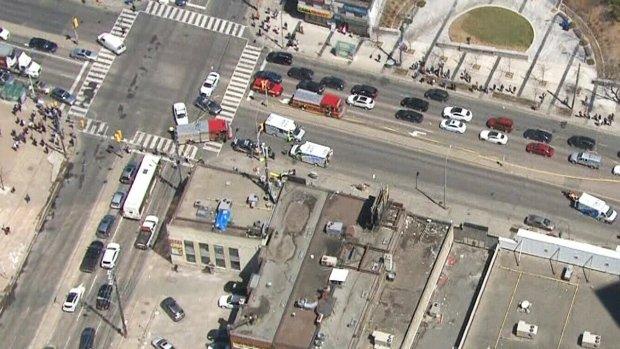 Rental van company Ryder confirmed it was co-operating with the authorities after one of its vehicles had been used in the attack.

Canadian Prime Minister Justin Trudeau said: "Our thoughts are obviously with all of those affected. We are still gathering information. We will keep Canadians updated."

Toronto Mayor John Tory paid his respects to the victims saying: "My thoughts are with those affected by this incident and the frontline responders who are working to help those injured. I have offered any and all assistance that the city can provide to police to help this investigation."