A Tory council candidate has been suspended just days before local elections after posting a picture of bacon hanging on a door handle as a way to ‘protect your house from terrorism’.

David Boston suggested it was a way to ‘stay safe lads’ but was condemned for Islamophobia after sharing the post on Facebook.

Mr Boston, the candidate for Enfield Council’s Turkey Street ward, also shared on Facebook a ‘twisted misfits’ post which said: ‘I envy guys for gettin to say ”suck my d***” as sort of a ”f*** you.” If I shouted ”lick my v*****” I’d have like 47 tongues in my pants.’

The posts were all originally made by other people and shared by the candidate into his feed.

He has been suspended by the Conservative Party but will still appear on the ballot paper as a Tory on Thursday as the deadline for withdrawing candidates passed last month. 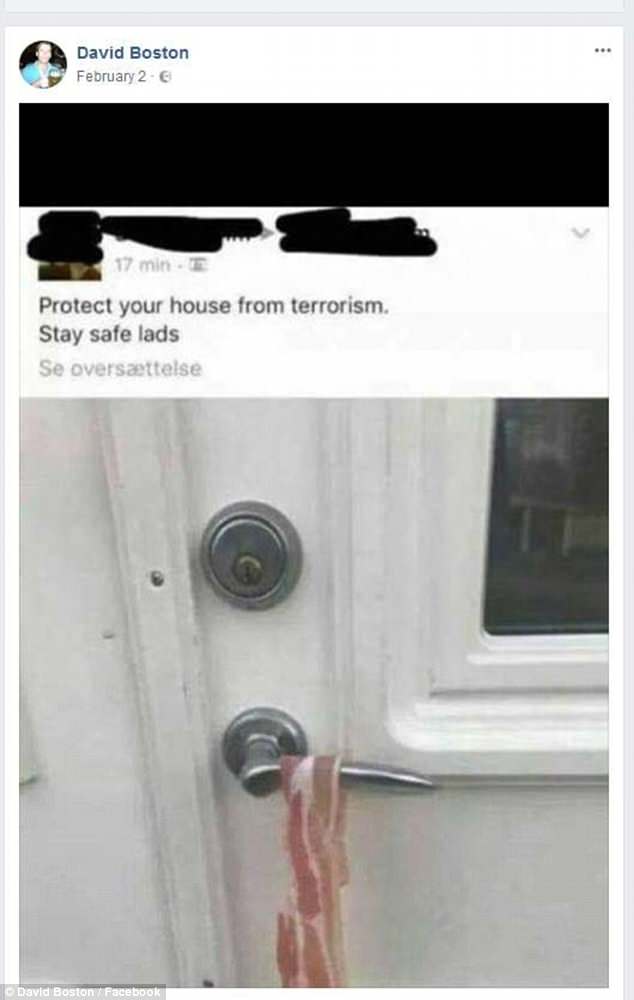 In response, the Enfield Conservatives posted on Facebook on April 16 that the posts did not reflect the values of the party and had been removed

One user, Joe Bailey, commented: ‘How about removing David Boston as your candidate?

‘These posts were not accidental, they show deep seated racism. Suggesting that you’ll keep terrorists away by hanging bacon on your door is truly disgusting behaviour.

‘Is this who the Conservative Party in Enfield wants to represent them?’

In another comment Mr Bailey added: ‘It is offensive on so many levels. Shocking that this man would still be standing for election as Conservative councillor.

‘Has the party no morals, that it can’t throw out bad apples?’

Graham Hale, replied to him: ‘I’ll be honest with you Joe Bailey, I’m seriously thinking of reporting this to the police.’

He then added: ‘I think the lack of candidates is how they have ended up having to scrape the bottom of the proverbial barrel.’

Pork is prohibited in Islam by a verse of the Koran, which reads: ‘Forbidden to you (for food) are: dead meat, blood, the flesh of swine, and that on which hath been invoked the name of other than Allah.’ 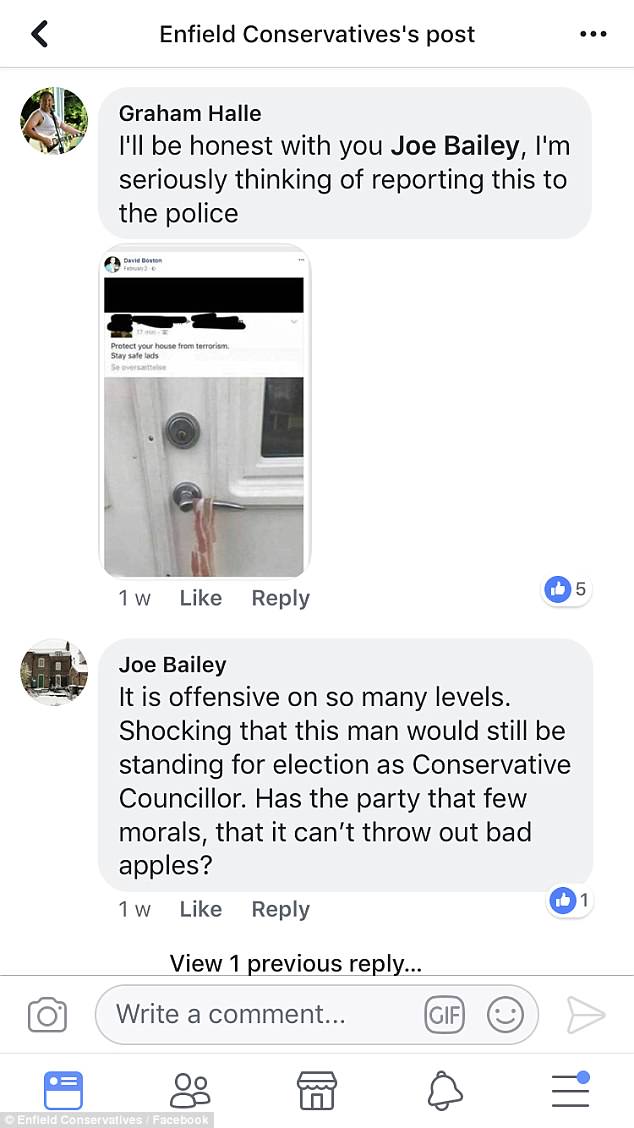 This incident follows a line of other suspensions in the Tory party.

On April 26, George Stoakley, who was due to stand for election in South Cambridgeshire, was suspended over inflammatory comments he made on Twitter years ago.

The 23-year-old made references to the horrendous conditions Anne Frank suffered while hiding from the Nazis.

Local elections are taking place on Thursday May 3.

A Conservative Party spokesperson said: ‘David Boston has been suspended pending an investigation.’