Follow
Home » World News » A transgender paradox in the Philippines

A transgender paradox in the Philippines

Maria Respondo:  Angel Cabaluna dusted makeup onto her thighs, styled her hair in loose curls and applied smoky eye shadow that glittered on her lids.

As this hamlet of cornfields and concrete houses prepared for festivities honouring its patron saint, and as some people gathered in prayer, Cabaluna, 20, was primping to compete in an annual transgender beauty pageant.

"This is our passion," she later said. 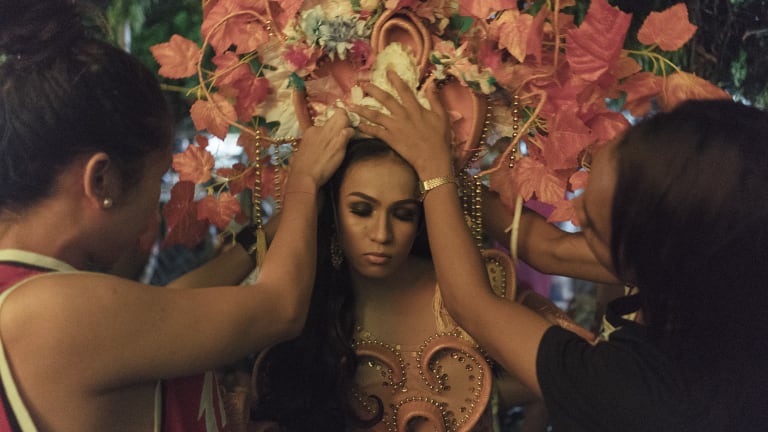 Dominated by conservative morals taught by the Roman Catholic Church, the Philippines is also one of South-east Asia's most tolerant countries toward gay, lesbian, bisexual or transgender people. And lawmakers are taking steps to ensure national legal protections that would penalise discrimination against them.

At the pageant, children sat cross-legged in the dirt, crowded close to the spindly stage where the contestants spun and danced in red feather head-dresses, gold brocade and clouds of tulle. The crowd laughed and cheered as they delivered flowery speeches, weaving jokes with witty rhymes, beauty-queen platitudes and proclamations on gender equality.

In a nearby chapel, the pageant's blaring pop songs mixed with the steady rhythm of churchgoers reciting the rosary.

About 80 per cent of Filipinos are Roman Catholic, and the church's teachings often dominate public life in the Philippines. Still, Cabaluna, who considers herself very religious, said: "LGBT are now accepted. We are very welcome." 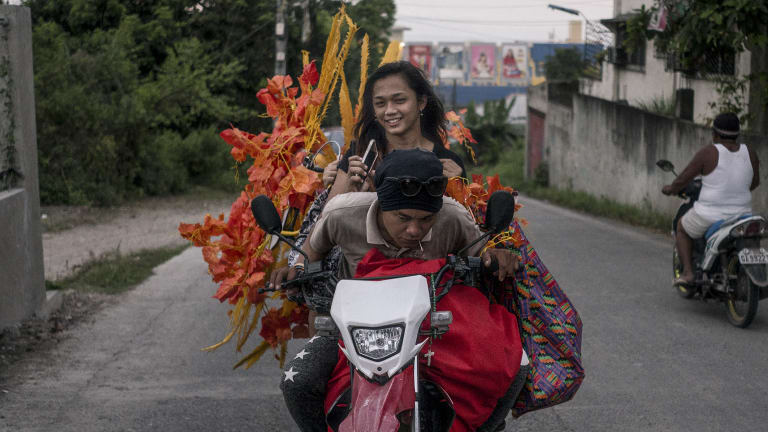 Contestant Angel Cabaluna is given a ride to an annual transgender beauty pageant in Maria Respondo, Philippines.

Geraldine Roman, the country's first openly transgender member of Congress, is spear-heading efforts to broaden legal protections in the Philippines.

For nearly 20 years, conservative politicians, backed by Catholic and evangelical groups, have thwarted anti-discrimination measures, arguing that they would infringe on people's right to religious expression.

But in September, with Roman at the helm, a bill prohibiting bias on the basis of sexual orientation, gender identity or expression passed the House of Representatives unanimously. 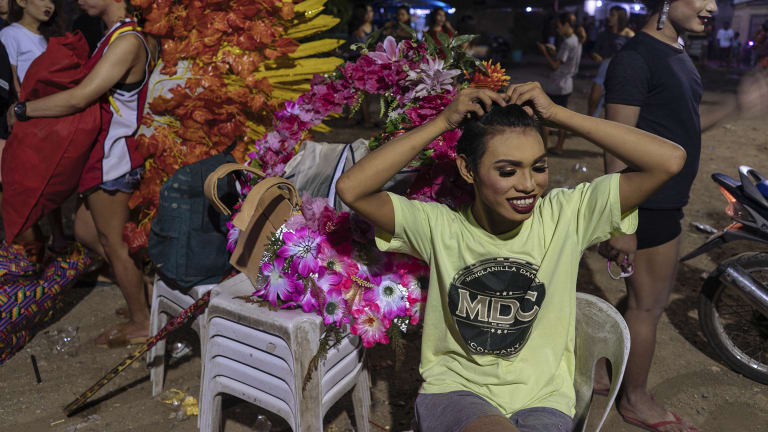 The speaker of the House, Pantaleon Alvarez, followed the success by introducing a civil partnership bill that seeks to give gay and transgender couples the same legal rights as married ones.

"They have the right to support each other," Alvarez said. "It's the duty and obligation of the government to protect them."

A survey published by the Pew Research Centre in 2014 found that 73 per cent of Filipinos said gay people and lesbians should be accepted by society. By comparison, near neighbours Indonesia and Malaysia polled at 3 per cent and 9 per cent.

Attitudes in the Philippines were comparable to countries such as Britain and Italy, and ahead of the United States, where acceptance is at 60 per cent. The survey found that tolerance is correlated with rich, secular societies. 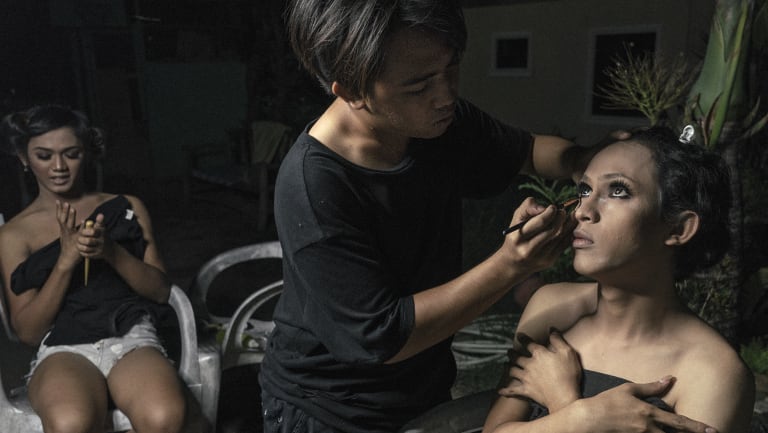 Contestant Kim Prahinog gets a touch-up on her eye makeup before an annual transgender beauty pageant in Maria Respondo.

Cabaluna, an accounting student, feels accepted by her family and says that gay and transgender people are "rampant" at her university. And while she finds the pageants thrilling, she also sees them as a platform for advancing gender equality.

At church, "we are allowed to wear girls' clothes", Cabaluna said. She has heard priests extol the same advice her mother told her: Regardless of your gender, what matters is being a good person before God and family.

The Reverand Renante Rabanes, who offered the Mass at the festivities for St Vincent, the hamlet's patron saint, said: "Transgenders are against the church. They are destroying what God gave them."

That night, Cabaluna was crowned queen of Maria Respondo, in a pageant far better attended than the Mass.

Jan Gabriel Melendrez Castañeda, an advocate on behalf of gay and transgender people in South-east Asia as part of several organisations, said, "Filipinos are used to contradictions."

Castañeda says that unlike other countries in the region, such advocacy groups can operate legally and relatively safely here.

Still, 41 transgender people were killed in the Philippines between 2008 and 2016, the highest rate in South-east Asia, according to the Trans Murder Monitoring Project of the organisation Transgender Europe. A study published in The Philippine Journal of Psychology in 2014 found that gay, lesbian, bisexual and transgender Filipinos were twice as likely to contemplate suicide as their heterosexual peers.

President Rodrigo Duterte said while campaigning in 2016 that he supported same-sex marriage, and he says he has relatives who are gay. 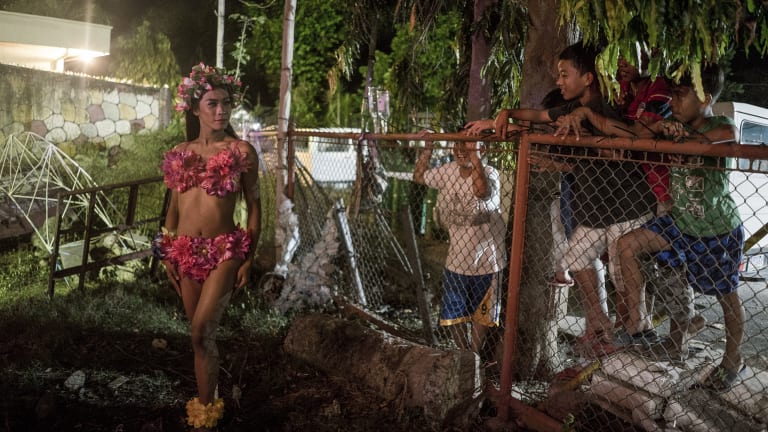 "Definitely, the gays were created by God," Duterte said on the campaign trail.

As a teenager he examined his own sexuality, he said: "When I was in high school, I did not know if I wanted to be a girl or a boy."

Duterte's supportive statements have not translated into changes to laws yet, though. Roman, the transgender legislator who is a member of Duterte's political party, has expressed frustration that the anti-discrimination bill has not received more backing from him. She says passage would need "more political will".

"Many politicians in this country speak in favour of LGBT rights when election time approaches," Roman said. "But when push comes to shove, they don't show the love."

The measure is the first of its kind to reach the Senate, where it is being held up by opposition, including bureaucratic manoeuvres by Senator Joel Villanueva, a staunch evangelical Christian.

"Obviously, it's just a delaying tactic" enabled by Senator Vicente Sotto III, the majority leader and a conservative Catholic, Roman said. If the bill is not passed by the end of this Congress in 2019, it will effectively be killed.

However widely tolerance extends, without laws against bias, people can still discriminate with impunity, as Roi Galfo found out.

Galfo, 33, had always felt accepted. Her mother supported her transition to life as a woman. She got jobs working with the government, as an assistant to a local politician and at a string of call centres.

At the end of a month of training at one call centre, the human resources officer told the group that all employees must use bathrooms according to the gender they were born with. Galfo was the only transgender person in the room.

Galfo was immediately defiant. "What would you feel if someone as pretty as me was in the male bathroom while you are trying to button and zip your pants?" Galfo asked. "Would you be comfortable with that?"

Told to file any complaints with the personnel office, Galfo was shaking with anger by the end of the meeting. Her co-workers tried to comfort her, one manager buying her ice cream. "It didn't help," Galfo said. "The damage had been done. I was already humiliated."

Not only did she not go back to the company, Galfo filed a case against it under a local anti-bias ordinance in Quezon City. About 40 towns and cities across the Philippines have similar ordinances against discriminating based on someone's gender identity. Ordinances serve as moral guidelines, but it is only in Quezon City, where the call centre company was located, that the ordinance carries the force of law.

Here Galfo's access to recourse under the law is unusual, but Castañeda, the rights advocate, says he sees a new level of assertiveness among Filipinos.

"Now people say, 'This is not right. We can take action,'" he said.

"Even the fact that our nation is contemplating these issues is changing how people see their place in society," he added. "Where there used to be just anger, resentment and fear, now there's a new component of hope."

The Quezon City ordinance remains weak, and after 1 1/2 years, Galfo is still awaiting a decision. But she is channeling the experience into a campaign for local office in the city of Valenzuela, where she lives.

The elections on May 14 may be a chance for Galfo to turn acceptance into political power. "I know I will be very much heard if I'm in the position," she said.