AMMAN (Reuters) – Jordan’s King Abdullah reacts angrily to any suggestion that he might accept a U.S. deal to end the Arab-Israeli conflict that would make his country a homeland for Palestinians. 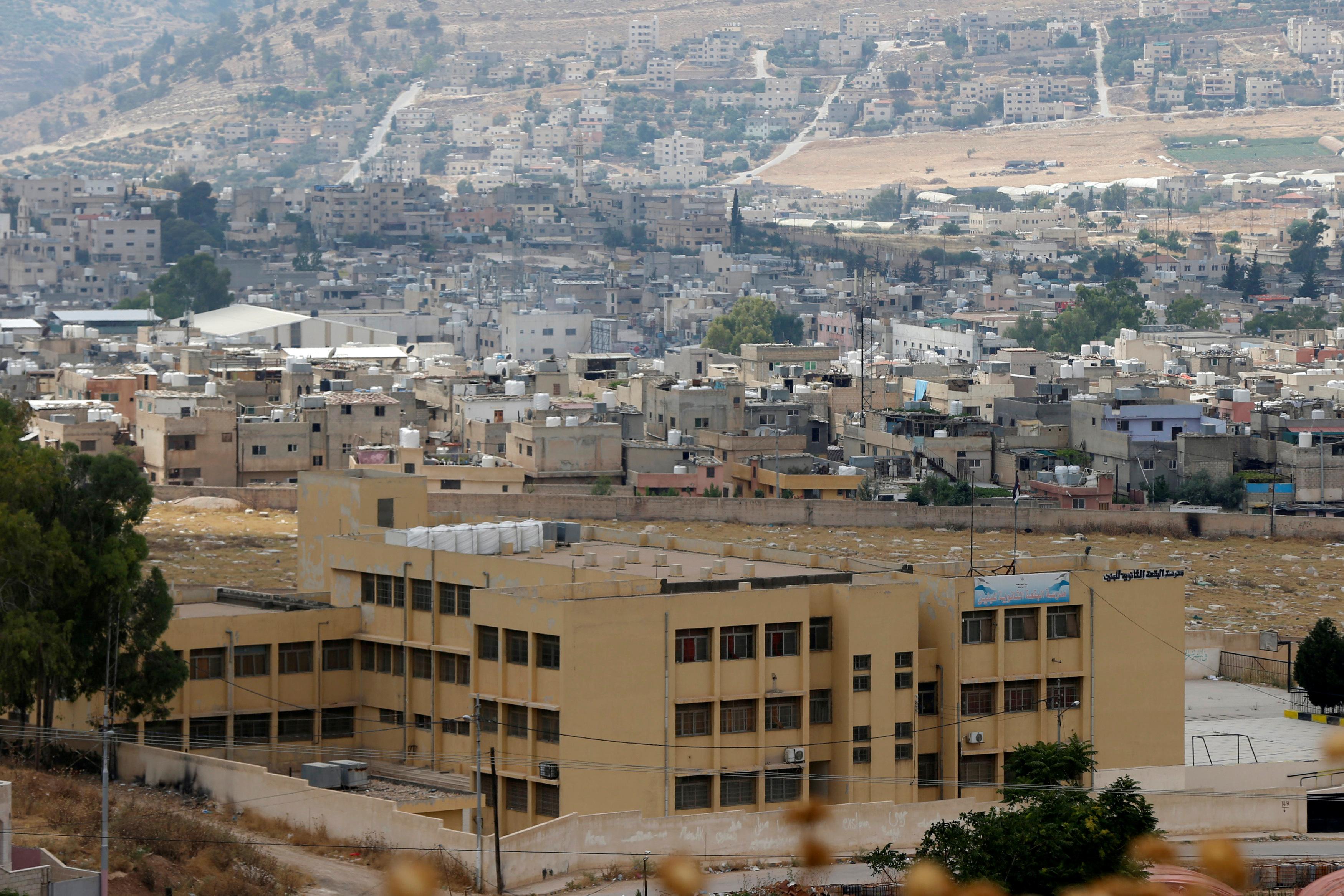 Speaking to the armed forces in March, he rejected the idea of Jordan as an alternative state for Palestinians, saying: “Don’t we have a voice in the end?”

Already facing economic discontent at home, Abdullah must navigate diplomatic moves by his U.S. allies that are upturning a regional status-quo that has underpinned Jordan’s internal politics and foreign relations for decades.

After Israel’s creation in 1948 Jordan absorbed more Palestinians than any other country, with some estimates that they now account for more than half the population.

Any changes to the international consensus on a two-state solution for Israel and Palestine, and Palestinian refugees’ right of return to what is now Israel and the Palestinian territories, long buttressed by U.S. policy, therefore reverberate harder in Jordan than anywhere else.

U.S. President Donald Trump’s long-promised “Deal of the Century” to resolve the conflict is still secret, though leaked details suggest it dumps the idea of a full Palestinian state in favor of limited self-rule in part of the Occupied Territories, which would undermine Palestinians’ right to return.

It envisages an expansion of Gaza into part of northern Egypt, under Egyptian control, with Palestinians also having a smaller share of the West Bank and some areas on the outskirts of Jerusalem and no control over their borders, the leaks say.

Jordanian fears about what the plan portends for the region, for their Palestinian citizens, and for the politics of their own country, have been aggravated by Trump’s readiness to upturn U.S. policy.

American officials deny contemplating making Jordan a Palestinian homeland, pushing it to take a role in governing parts of the West Bank or challenging the right of King Abdullah’s dynasty to custodianship of Jerusalem’s holy sites.

But Trump’s radical approach to the issue, and recent statements by his ambassador to Israel that it had a right to annex some of the West Bank have done little to assuage Jordanian concerns.

Few subjects in Jordan are more politically charged than the role, presence and future there of Palestinians. The issue is so sensitive that the government publishes no data on how many of its 8 million citizens are also of Palestinian descent, though a recent U.S. congressional report put it at more than half.

Despite the U.S. denials, Jordanians fear that Trump is returning to an old Israeli theme: that Jordan is Palestine and that is where the Palestinians of the West Bank should go.

It could not have come at a worse time for the 57-year-old Abdullah, whose country is facing economic challenges that led to protests and a change of government last year.

While many Palestinians are integrated in Jordan, and many descendants of refugees have never set foot in their original homeland, some native Jordanians have never acknowledged that they will stay permanently.

They fear Trump’s plan could alter the demography and politics of a nation shaped by the presence of Palestinians, who hold full citizenship but are marginalized and seen as a political threat by some people of Jordanian descent.

But Abdullah’s decision that Jordan should attend an economic conference that is part of the U.S. plan showed that despite mounting alarm at home, Amman cannot ignore pressure from richer, more powerful allies in the West and the Gulf.

Maintaining unity between citizens of Jordanian and Palestinian descent has been critical to the ruling family’s role as a unifying force in a country where tribal and clan loyalties hold sway.

The king is already facing anger from the “Herak” opposition, drawn from Jordanians of native descent, who say Trump’s plans will tear apart a state patronage system that has cemented their own loyalty to the monarchy.

Retired army officers have held small weekly protests in opposition to a deal.

“No to eroding our national identity and dismantling the state,” said Saad Alaween, a prominent Herak dissident, referring to the deal.

Some warn the monarch not to accept a plan that could give their compatriots of Palestinian origin more political rights in an electoral system tilted in favor of native Jordanians.

Rumors that the plan could lead to Jordan taking in Palestinian refugees in Lebanon and Syria, or that it would merge with a rump of Palestinian territory in bits of the West Bank, have also led to alarm.

In a sign of his concerns, the king has even met lawmakers from the once outcast Islamist movement in an attempt, say officials, to win the backing of the largest opposition grouping with support in large cities and Palestinian camps.

“Trump wants to buy and sell Jordan and create a new regime. We are behind the king in opposing this,” said Muraed al-Adaylah, head of the Islamic Action Front, the political arm of the Muslim Brotherhood.

Abdullah also inspired a shake-up in the intelligence establishment – long seen as a guardian of Jordan’s stability – to solidify the internal front and mitigate any fallout from the deal in the months to come, insiders say.

In the army – whose loyalty to the crown is deeply meshed with Jordanian national identity – there are also signs of concern.

“Jordan is a country that has sovereignty and history, and will say its word at the right moment,” said General Mahmoud al-Friehat, the army’s chief of staff.

Jordan’s long-term strategic and economic policy is based on close relations with the West and the Gulf – an approach that underlay its decision to make peace with Israel in 1994.

Abdullah has made repeated visits to Washington, where officials say he was not told details of the White House plan.

That has only accentuated the sense of alarm among a political establishment that sees a day of reckoning coming with Trump’s deal, two officials and a politician said.

The royal palace has pointed to demonstrations in dozens of rural towns and cities as a message to Washington that it cannot impose a solution that permanently settles Palestinians in Jordan against its will.

Jordan has traditionally turned to monarchies in the Gulf to shore up its economy. However, their focus has shifted to their rivalry with Iran, cutting financial support and leaving Jordan more exposed than ever.

“Our Gulf allies are too beholden to Washington … to extend the level of support that can help us withstand the growing pressures,” said a senior official.

Although Jordan will join the conference to roll out the economic parts of Trump’s plan, it will deliver a message there that no cash offers can replace a political solution to end Israel’s occupation of the West Bank, officials say.

Still, some think economically challenged Jordan could profit from any plan that promises billions in aid and project finance.

Some businessmen have already positioned themselves to benefit and this month a prominent MP, Fawaz al-Zubi, said Jordanians should be open-minded about anything they could gain from it. 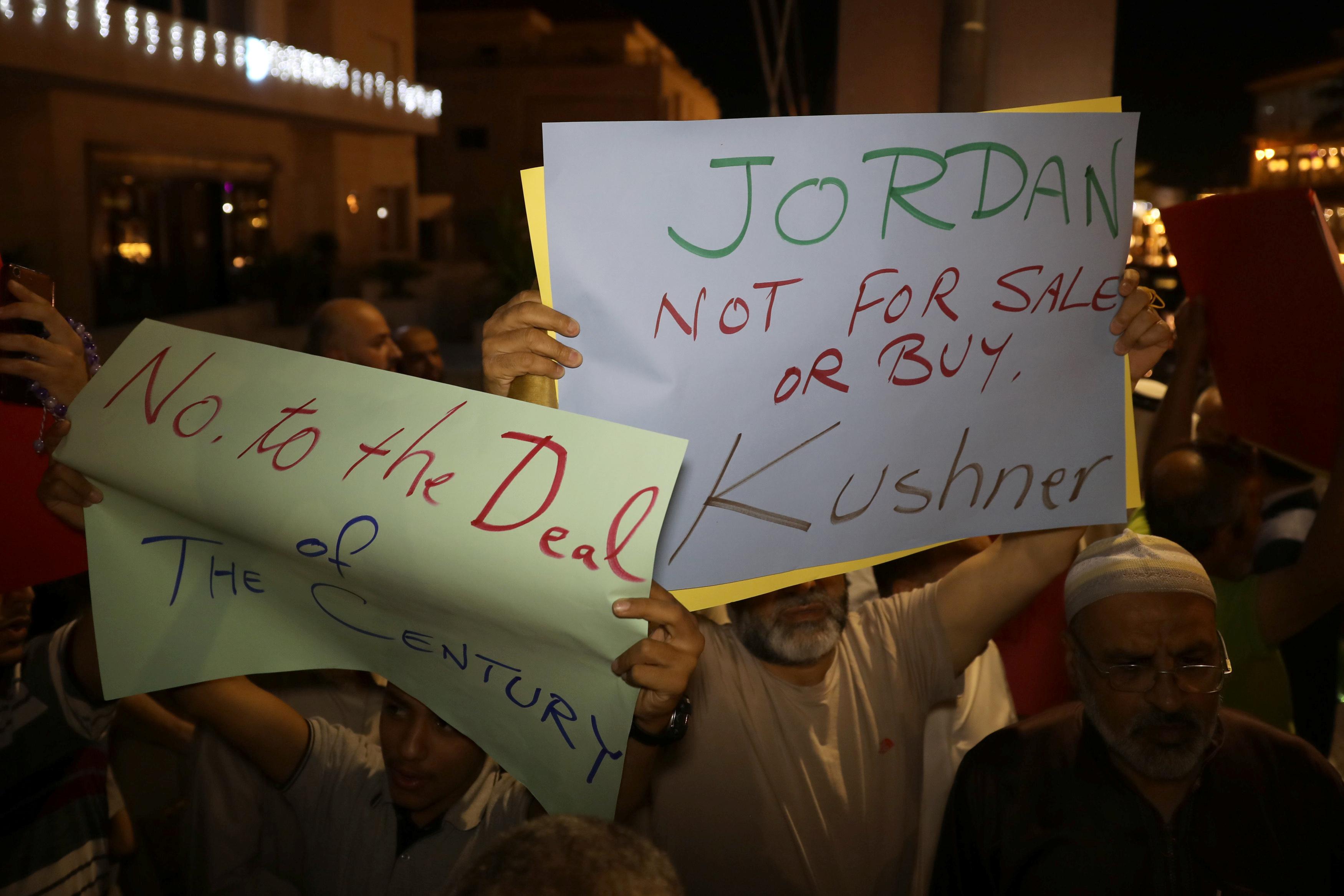 In the camps where 2.2 million of Jordan’s registered refugees live, bitter realism seems to prevail.

Ibrahim Anabtawi, a second-generation refugee with six children, said that like others in the camp he had dug up old United Nations ration cards to prove their rights in case any new deal offered compensation.

“I won’t forget I am a Palestinian or give up the right of return,” said Anabtawi. But he added: “I have been persecuted all this time and no one stood by us. I now want anything that this deal and Trump offers.”

egypt, is, Jordan, MIDEAST, Us, USA
You may also like: