Wellington: In Vanuatu, homes have been destroyed and livelihoods ruined by Tropical Cyclone Harold, which passed through the country's northern islands as a category-five system, wreaking devastation. 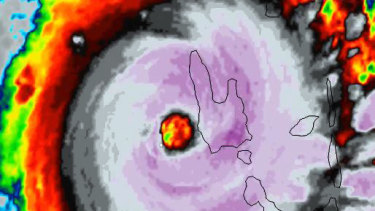 Cyclone Harold passed through the Solomon Islands on its way to Vanuatu and could reach Fiji later in the week. Credit:Weathernerds.org

The total scale of the destruction is not yet clear as main communication lines have been cut off to the hardest hit islands of the archipelago nation.

But pictures from Espiritu Santo and Malo Islands show villages reduced to ruins by the storm, which reportedly carried 235km/h winds, overnight.

Radio NZ reports that houses have collapsed, roads have flooded, the coastline has been battered.

The country's second-biggest settlement, Luganville, was close to the eye of the storm – around 200km north of the capital, Port Vila.

There are yet to be any reports of loss of life.

Harold is the most brutal cyclone to hit the South Pacific in at least two years.

The storm remains as a category-five system, the highest classification, and has moved east of Vanuatu.

It will reach Fiji in the next 72 hours if it continues on its current direction and speed.