Tropical Storm Bertha made landfall on South Carolina’s coast Wednesday morning just hours after it was officially named, becoming the second named storm to hit before the official start of this year’s Atlantic hurricane season.

The tropical storm already brought three days of torrential rain and holiday weekend flooding to Florida before moving up the coast and making landfall in South Carolina around 9.30am EST, centered about 40 miles northeast of Charleston, with sustained winds near 50mph.

A tropical storm warning was issued for South Carolina’s coast and the storm was expected to bring heavy rainfall with up to eight inches of rain in certain areas, the US National Hurricane Center said.

The storm is moving north near 15mph and is expected to weaken to a tropical depression after moving inland. 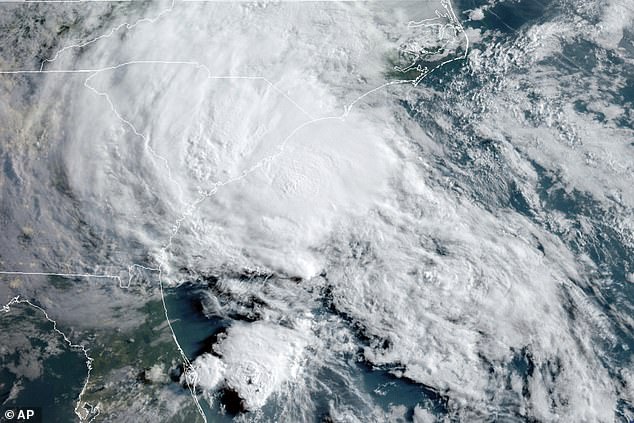 Tropical Storm Bertha made landfall on South Carolina’s coast at 9.30am EST centered about 40 miles northeast of Charleston, with sustained winds near 50mph. The storm hit land less than two hours after it was named Bertha by the National Hurricane Center. A satellite view of the storm about to hit land at 7.40am EST 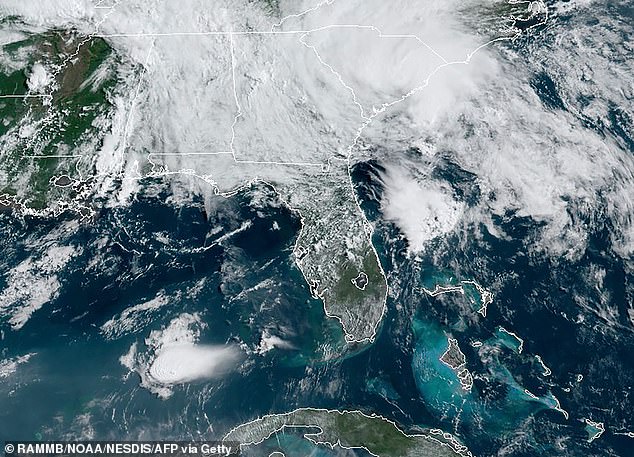 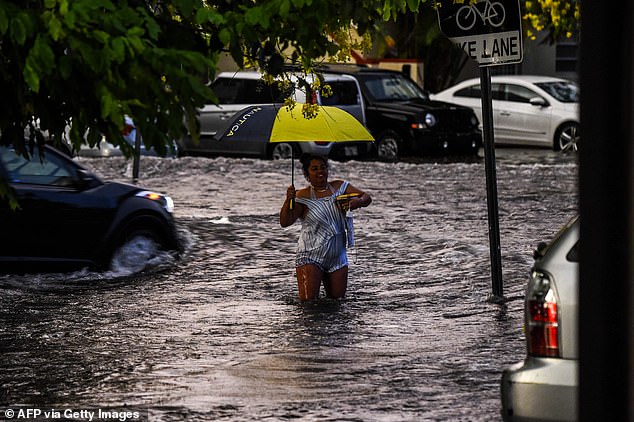 The tropical storm brought torrential rain and flood to Florida over the Memorial Day weekend. A woman pictured walking in massive foods in Miami on Tuesday evening following three days of relentless rain that reached over seven inches 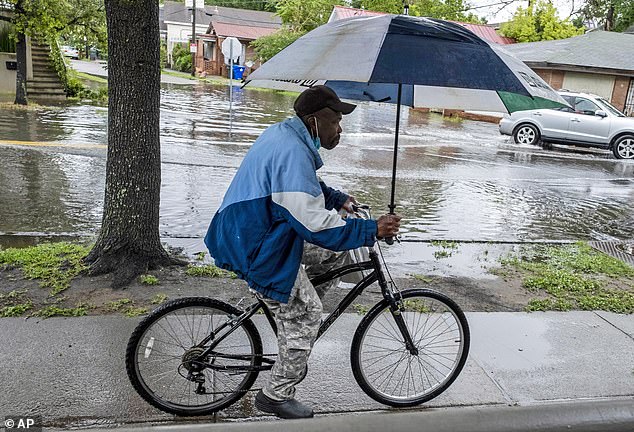 A man rides a bicycle while holding an umbrella as rain from Tropical Storm Bertha flooded a few streets in Charleston, South Carolina on Wednesday morning

The storm landed less than two hours after it was named by the Hurricane Center.

According to Accuweather Bertha is listed as less than a Category 1 storm.

The storm caused minor flooding in Charleston with a few streets closed as of Wednesday morning. But the city, which floods dozens of times a year, saw worse problems from an unnamed storm that dumped heavy rain last week.

Along America Street in Charleston, residents awoke Wednesday to an intersection that had become a water-filled canal.

Cars parked on the curb had water up to their doors, garbage cans had spilled over, and dirty diapers, magazines and food scraps clogged drains in the area.

The storm is expected to move rapidly inland spreading up one to three inches of rain in general but could dump up to eight inches in some areas throughout eastern South Carolina into North Carolina and Virginia over Wednesday night.

‘The NHC issued a tropical storm warning for the coast of South Carolina from Edisto Beach to South Santee River. The center of Bertha will move onshore in the warning area in the next few hours and then move inland across eastern and northern South Carolina later today and into west-central North Carolina by tonight,’ the NHC said.

Flash flood watches were issued as the region has already seen plenty of rain in May.

Earlier this month, Tropical Storm Arthur brought rain to North Carolina before moving out to sea. It was the sixth straight year that a named storm has developed before June 1, the official start of the Atlantic hurricane season.

Florida has been reeling from three days of heavy rainfall that led cities like Miami to flood with over seven inches of water in some areas on Tuesday alone.

Some locals were seeing struggling through knee-deep water as they went out and about trying to enjoy Memorial Day weekend and scaled back coronavirus restrictions. 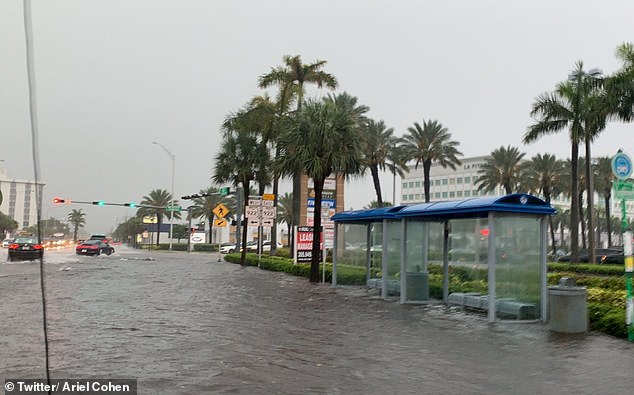 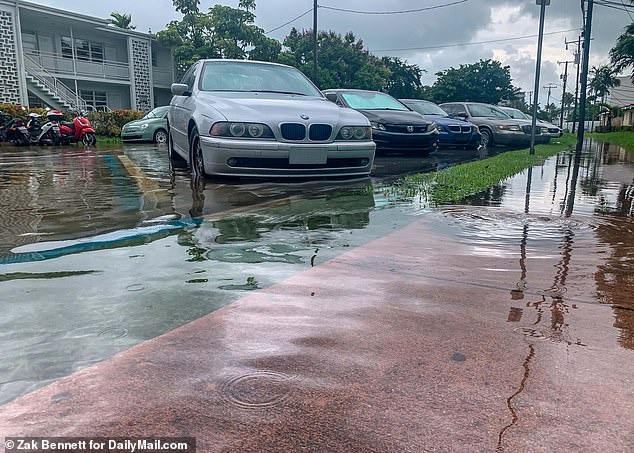 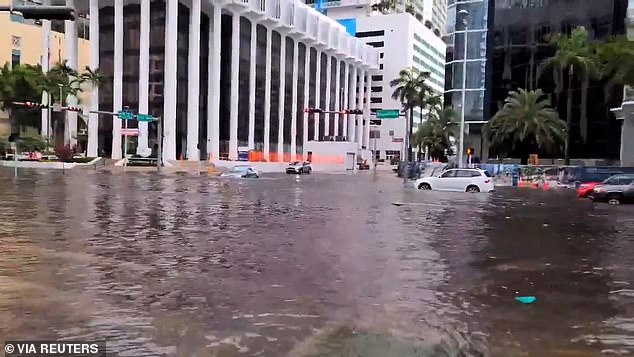 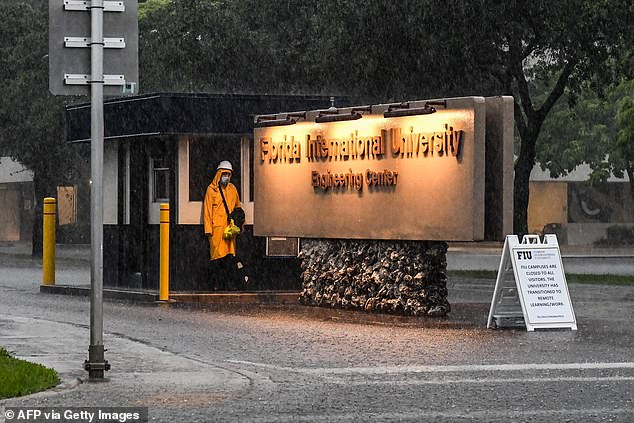 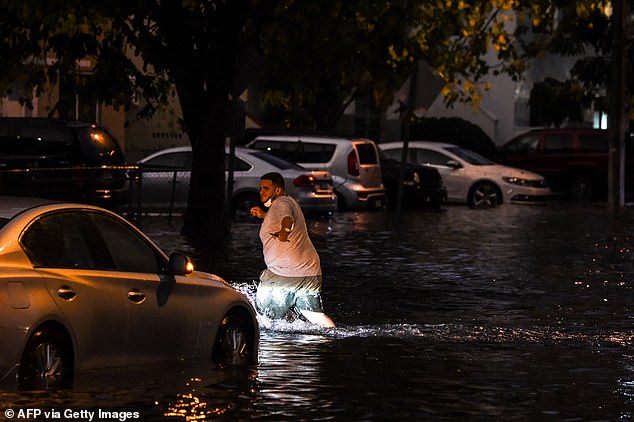 A man trudges through knee-deep floods in Miami on Tuesday night. The deluge prevented South Floridians from enjoying the recent reopenings of restaurants, businesses and beaches after nearly two months of lockdowns due to the coronavirus pandemic

Miami recorded 14.6 inches of rain over the weekend,  seven of those inches came in just four hours on Tuesday evening, marking the city’s wettest day in eight years since May 2012 when nine inches fell, according to NBC.

Meanwhile West Palm Beach broke its daily rainfall record on Monday when 4.44 inches of rain was recorded. Fort Lauderdale also recorded a new record rainfall on May 25, with a total of 4.03 inches.

The deluge prevented South Floridians from enjoying the recent reopenings of restaurants, businesses and beaches after nearly two months of lockdowns due to the coronavirus pandemic.

The last time there were two named storms before June was in 2016, according to Phil Klotzbach, a research scientist with Colorado State University’s atmospheric science department. It also happened in 1887, 1908, 1951 and 2012, he said.

‘Most of these early season named storms form, at least in part, from non-tropical or subtropical processes and don’t necessarily imply anything about the remainder of the season,’ Klotzbach said.

Bertha, la, makes, storm, Tropical
You may also like: