The horrors of Japan’s WWII ‘human experiments unit’: Disturbing images show how Chinese civilians and Allied POWs were dissected ALIVE and infected with the PLAGUE

The harrowing tale of how Japan carried out a series of horrific human experiments under the guise of ‘warfare research’ during World War II is told in a new book.

Unit 731 was built in 1936 in modern-day Harbin, northeastern China, for the Japanese Imperial Army to conduct research into germ warfare, weapons capabilities and the limits of the human body. 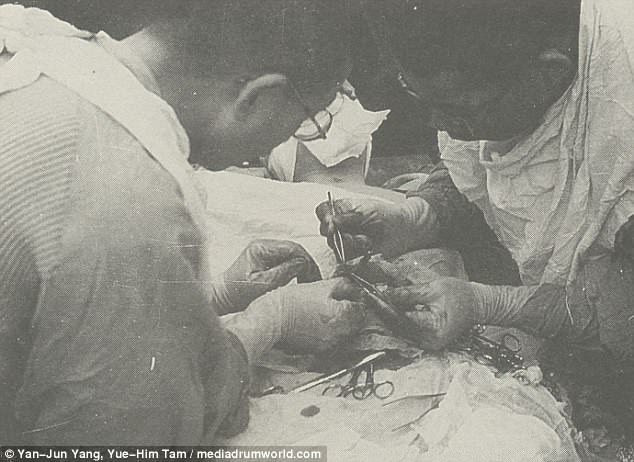 Horrendous: Japanese scientists carry out a vivisection – a dissection of a live human being without anesthetics – just one of dozens of human experiments carried out at Unit 371

It was a completely covert operation, and during WWII it was at first described as a lumber mill, then a water purification plant, and even today, awareness of Unit 731 in and outside of Japan is low.

Today, its remains, now a museum, echo many of the chilling hallmarks of a former Nazi death camp  with its disused railway track and ghostly buildings.

The horrendous disease was later unleashed on hundreds of thousands of Chinese, by dropping plague-carrying fleas on villages as part of experiments in biochemical warfare.

Photographs from the new book – Unit 731: Laboratory of the Devil, Auschwitz of the East – shows Japanese soldiers taking part in a vivisection – carrying out operations on a live person to study living tissue and organs. 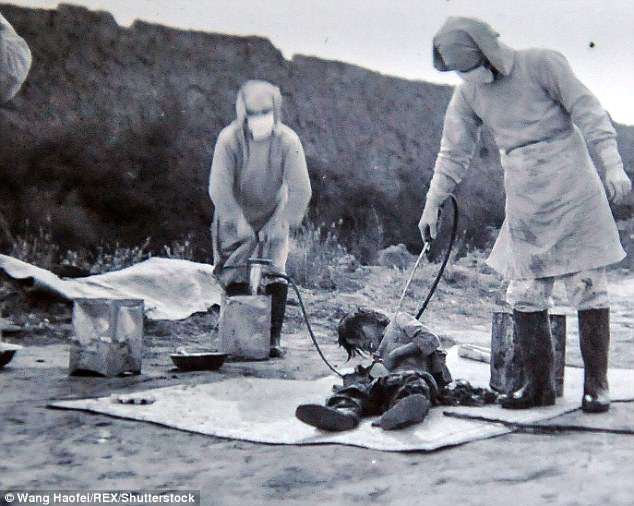 War crimes: A human ‘subject’, seemingly a young Chinese civilian, is subjected to an unknown form of bacteriological test at Unit 731,  built to conduct research into germ warfare, weapons capabilities and the limits of the human body 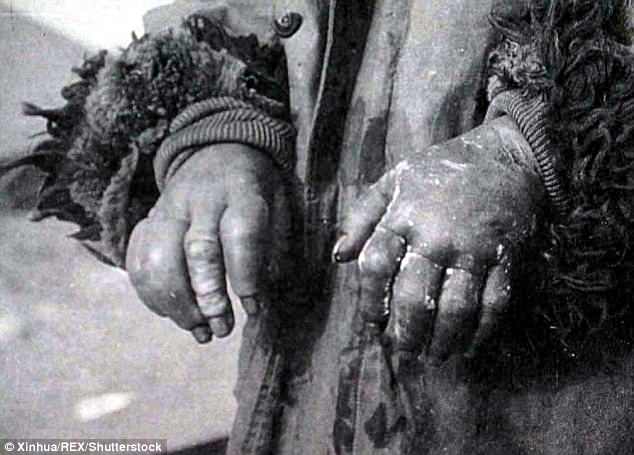 Human guinea-pigs: Frostbitten hands of a Chinese prisoner at Unit 731, where scientists would test the effects of hypothermia and gangrene on human subjects 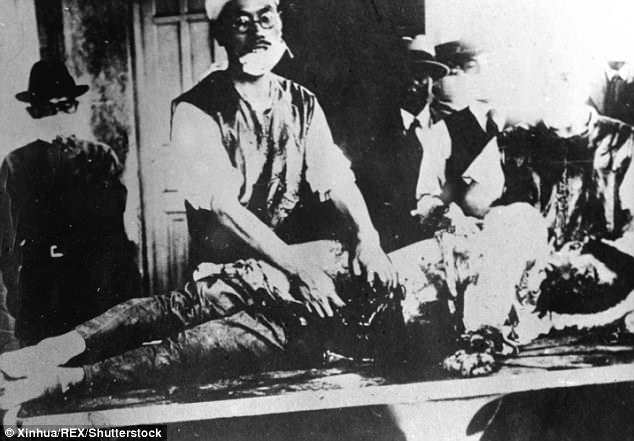 In the name of science: A vivisection is carried out in this photograph from Unit 731

Experiments and dissections on men, women and children were carried out without anaesthetic so that the results would not be influenced by drugs.

Prisoners would be infected with diseases, after which their organs would be removed while still alive so the scientists could study the effects of the disease before decomposition could start.

Limbs would be amputated from prisoners to study blood loss,  and documents show that they were often re-attached to opposite sides of the body.

Extensive experiments into frostbite were carried out, as the Japanese tried to find the best cure for the affliction.

Prisoners would be exposed to extreme temperatures in order to develop frostbite, after which the Japanese would study how long it took before gangrene would set in, and how long a human could survive it.

One experiment conducted on young Chinese civilians would see their arms frozen stiff with ice, before being placed into a vat of hot water.

The flesh would then be stripped off the bones – the prisoner still alive. 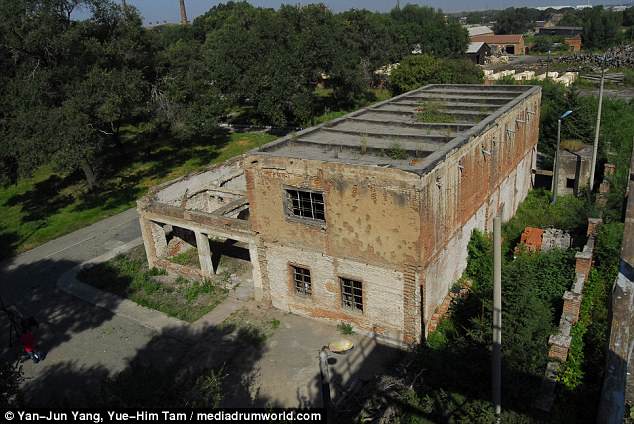 Torture: More than 3,000 people – mostly Chinese civilians, but also Allied POWs – were murdered in human experiments at Unit 731 – seen here is the remains of the frostbite lab 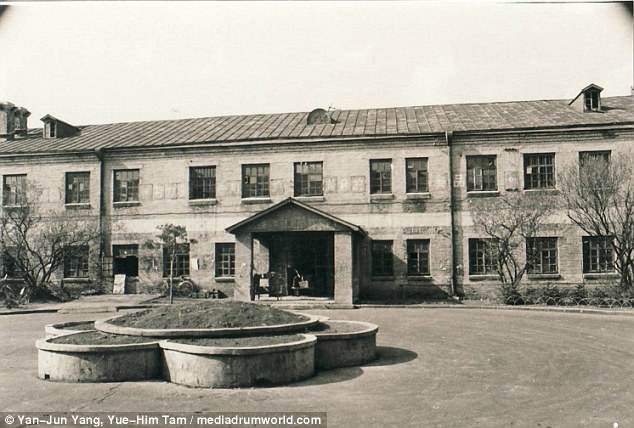 Back then: Unit 731, which was built in 1936 in modern-day Harbin, northeastern China when the area was a Japanese puppet state, is seen in one of its first years in operation

Doctors injected prisoners with animal blood or forced them to share cells with diseased inmates to test how infectious the conditions were, historians say.

Female prisoners were systematically raped to force pregnancies, in the name of science.

Sometimes the mother-to-be would then be infected with syphilis or another disease, so the Japanese could study how it may affect the foetus.

A shocking photograph found in archives show a Chinese woman so far along in her pregnancy that the fully-grown baby has turned, ready to be born. She has been cut open from throat to pelvis, the baby exposed in her belly.

Despite knowledge of a large number of babies born at Unit 731, there are no accounts of any survivors – including children. 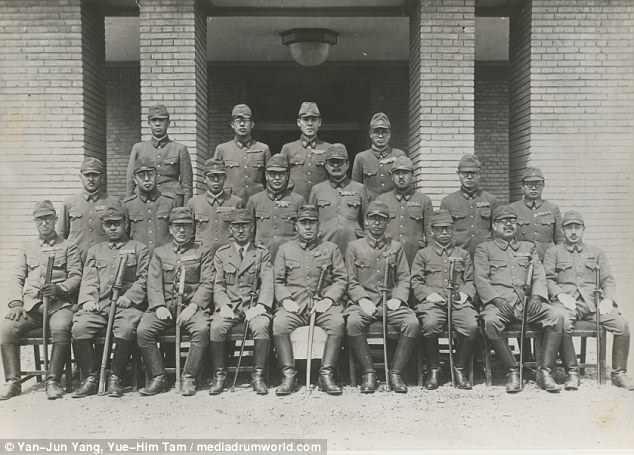 Unit of torture: The senior officers of Unit 731 are pictured during World War II 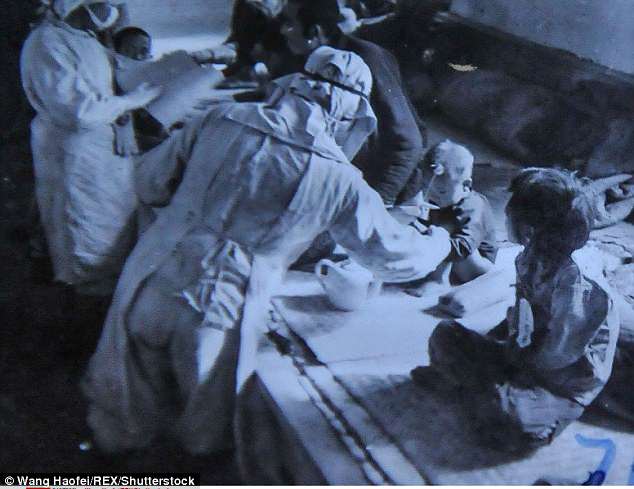 Some of those at Unit 731 died in experiments testing weapons such as grenades and biological bombs. Others are said to have been buried alive or drowned.

As well as the 3,000 killed at Unit 731, tens of thousands are also thought to have died when the Japanese used what they had learned against their enemies in the war – mainly Chinese civilians.

In addition to releasing plague-infected fleas, the Japanese are known to have planted typhoid fever, cholera and other diseases into the water systems in Chinese villages. 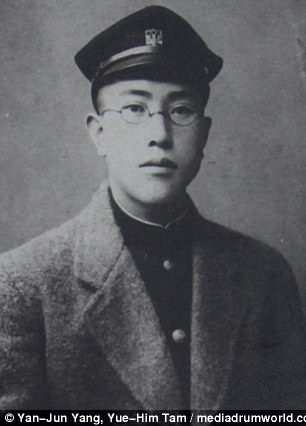 Evil: The head of Unit 731, Shirō Ishii, who was awarded immunity by the US after the war

Despite thousands of victims, the Japanese government denied the existence of the unit until 1998, when the Supreme Court indirectly acknowledged it by ruling there was an academic consensus that Unit 731 existed.

The man largely responsible for the operation of Unit 731, Shirō Ishii, escaped punishment after the war.

Ishii, and several others from Unit 731, were granted immunity by the United States in exchange for full disclosure of the results of their biological warfare experiments.

The Soviet Union did hold trials for eleven of the scientist working at Unit 731 at the end of the war.

They each received between two and 25 years in a Siberian labour camp.

Last month, a group of Japanese scholars announced that they are is set to publish a list of 3,607 members of Unit 731, including 52 surgeons, 49 engineers, 38 nurses and 1,117 combat medics.