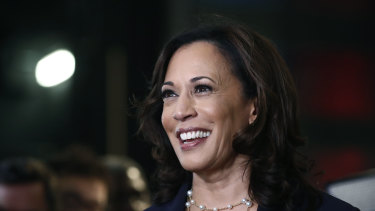 Kamala Harris rose to national prominence as a senator for California.Credit:AP

In 2015, the year Trump began his campaign for president, Harris said she gave his donations to charity.

Harris, a Democrat, served as California’s attorney-general from 2011 to 2016, before she was elected to the US Senate. In her 2016 Senate race, Harris' Democratic opponent Loretta Sanchez had criticised her for accepting the contributions, noting that Harris' office had investigated Trump University – the future president's for-profit real estate school – but did not take legal action against it.

On Tuesday, presumptive Democratic nominee Joe Biden chose Harris as his running mate. The Biden campaign did not respond to questions about the donations on Wednesday. In 2016, Harris' Senate campaign defended her by pointing to other cases in which she had investigated for-profit colleges.

At the time of Trump's donations to Harris, Trump University had already shut down its classes. 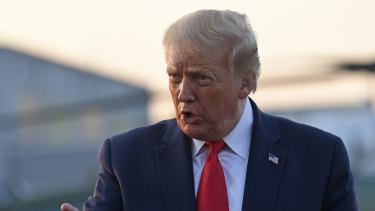 But it was facing a class-action lawsuit from former students in California, and an investigation by then-New York Attorney-General Eric Schneiderman, a Democrat who later filed a lawsuit against the university.

The lawsuits alleged that Trump's school had duped students into paying thousands of dollars for seminars and mentorships that offered little value.

In 2016, Harris' office told The Wall Street Journal that it had also investigated Trump University.

But it is unclear when that California investigation actually began or what became of it. The office of the current California Attorney-General, Democrat Xavier Becerra, did not respond to questions about Trump University on Wednesday.

In 2013, Trump gave $US25,000 to then-Florida attorney -general Pamela Bondi around the time that her office was considering joining a lawsuit against Trump University. Bondi's office did not join the lawsuit, but Bondi, a Republican, has said the decision was not influenced by Trump's gift.

In late 2016, after Trump won the presidential election, Trump University agreed to pay $US25 million to settle the lawsuits filed by Schneiderman and the class-action plaintiffs.

At one time, it was not unusual for Trump to donate to Democratic candidates. As a businessman in New York, he had donated to two Democrats he would later face in presidential elections: Hillary Clinton and Biden. The gift to Biden's campaign was in 2001, for $US1000.

But after about 2010, campaign finance records show, Trump began donating almost exclusively to Republicans. That coincided with his rise in GOP politics as a leading booster of the false conspiracy theory that then-president Barack Obama was not born in the United States.

So why did Trump give to Harris when he had largely stopped giving to other Democrats?

In the past, Trump has said he viewed the contribution to Harris as a favour for Schneiderman. In a 2013 affidavit, Trump said a political figure close to Schneiderman "asked my daughter Ivanka if she would arrange for me to make a contribution to a fundraising event sponsored by Schneiderman for newly elected California Attorney-General Kamala D. Harris."

Trump said he made a $US5000 donation. He did not attend the event, but Ivanka Trump and other Trump Organisation executives did, he said in the affidavit. Trump later submitted the affidavit in a court filing.

Schneiderman resigned in 2018 after reports that he had physically abused women. He declined to comment through a spokeswoman on Wednesday.

A spokeswoman for Trump's 2020 campaign, Katrina Pierson, said in an interview with PBS that Trump's donation to Harris – whose parents were immigrants from India and Jamaica – showed the President was not racist.

"I will note that Kamala Harris is a black woman and he donated to her campaign so I hope we can squash this racism argument now," Pierson said, according to a tweet from PBS NewsHour correspondent Yamiche Alcindor.

donated, kamala, money, to, Trump
You may also like:

De Blasio still has no coronavirus recovery plan for NYC