‘You’d be having a nice big fat war’: Trump brandishes Game of Thrones-inspired ‘Sanctions are Coming’ poster in Cabinet meeting where he claims his Kim summit prevented WWIII

President Trump said Wednesday that he prevented WWIII with his Kim summit.

He revealed that he’d just received another letter from the North Korean dictator that he flashed and said he wished he could show reporters in order to demonstrate the ‘good relationship’ they have established.

If it weren’t for their June 2018 summit, he said, ‘You’d be at war right now, you’d be having a nice big fat war in Asia, and it wouldn’t be pleasant.’

Trump meanwhile warned America’s sworn enemies on Wednesday that ‘sanctions are coming’ if they misbehave during his first Cabinet meeting of 2019.

He brandished the movie poster that’s based on the ‘Game of Thrones’ mantra ‘Winter is Coming’ in the meeting where he spoke favorably about a second summit with the North Korean leader Kim Jong-un.

Trump had first used the poster to take a slap at Iran, but left it on the table at his Cabinet meeting without explaining who the intended recipient of the message is. 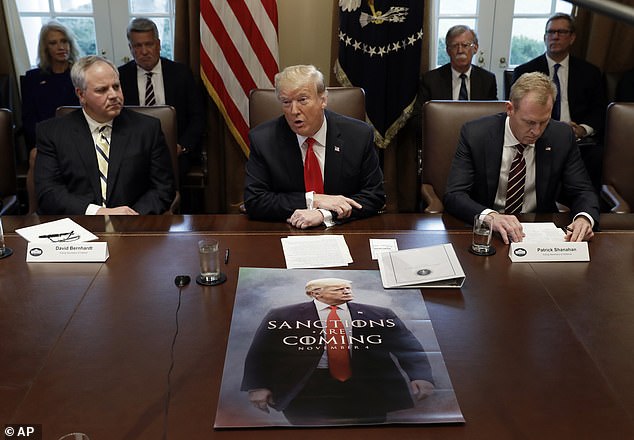 Kim had warned Trump not to test his patience in a New Year’s address, in which he said the hermit nation could revert to nuclear and missile testing if the United States doesn’t make good on its promise to lift punishing actions.

Trump said Wednesday that Kim really wants denuclearization and he looks forward to another summit with him.

The two leaders made global headlines with an unprecedented summit in Singapore in June, where they signed a vaguely-worded pledge on denuclearization of the Korean peninsula.

But progress has since stalled with the two sides disagreeing over what the declaration means, and the pace of U.S.-North Korean negotiations has slowed, with meetings and visits cancelled at short notice.

North Korea has not fulfilled its commitment at the summit to totally and completely denuclearize, although it has not conducted any tests since 2017.

‘I never said speed,’ President Trump said of the loose agreement on Wednesday. ‘We don’t have to rush. There’s no rush.’

The North is demanding relief from the multiple sanctions imposed on it over its banned nuclear weapons and ballistic missile programs, and has condemned U.S. insistence on its nuclear disarmament as ‘gangster-like.’ 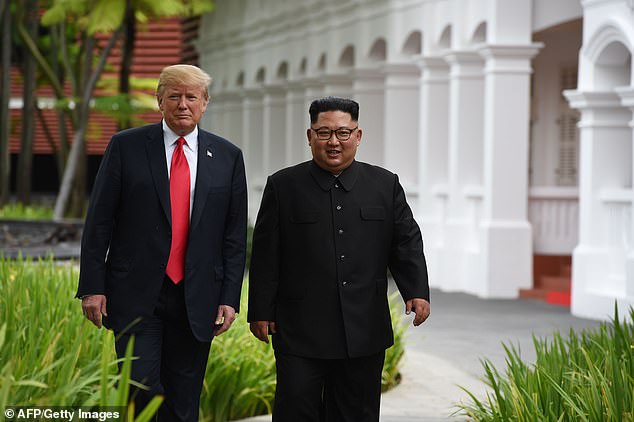 Speculation of a second Trump-Kim summit has ebbed and flowed, with the U.S. president saying that he hoped it would take place early this year.

‘I also look forward to meeting with Chairman Kim who realizes so well that North Korea possesses great economic potential!’ he said in a tweet.

But a proposed visit by Kim to Seoul before the end of December did not materialize.

In his New Year speech Kim called for the sanctions to be eased, saying that the North had declared ‘we would neither make and test nuclear weapons any longer nor use and proliferate them,’ and urged the U.S. to take ‘corresponding practical actions.’

If Washington instead continues with the measures, he added, ‘we may be compelled to find a new way for defending the sovereignty of the country and the supreme interests of the state.’

He was willing to meet Trump at any time, he said.

Kim delivered his speech sitting in a leather armchair in a book-lined office with a patterned blue carpet, presented as being at the headquarters of the ruling Workers’ Party of Korea.

Large paintings of Kim’s predecessors, his father Kim Jong Il and grandfather Kim Il Sung, looked on and a white phone lay on the side table next to Kim’s chair.

It was a marked departure from previous New Year speeches – always a key moment in the North Korean political calendar – which Kim has usually delivered much more formally, standing at a podium. 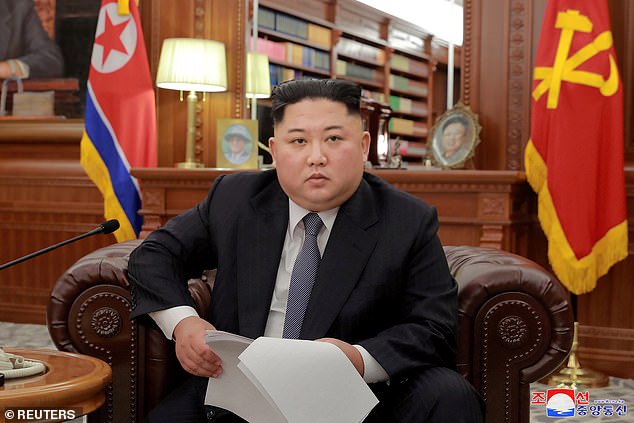 In his New Year speech Kim called for the sanctions to be eased, saying that the North had declared ‘we would neither make and test nuclear weapons any longer nor use and proliferate them,’ and urged the U.S. to take ‘corresponding practical actions’

One thing that was different from past speeches by the North Korean leader was that it was ‘a relaxed, indoor setting, with him sitting in a comfortable chair rather than standing and speaking in a huge square,’ the Korea Times said.

‘It seems North Korea was once again trying to establish a new identity as a normal country on the global stage and distance itself from the image of the impoverished authoritarian state that the rest of the world associates it with.’

Kim dedicated most of his 30-minute speech to calls to shore up the nation’s moribund economy and curb chronic power shortage – a goal impossible to achieve without lifting of the sanctions.

South Korea – a key U.S. ally in Asia and the North’s capitalist neighbor – praised Kim’s speech, calling it a reaffirmation of Pyongyang’s commitment to denuclearization.

Seoul and Washington have at times pursued divergent approaches to the Pyongyang, with the South pushing cross-border co-operation projects, including connecting railways and roads across the heavily-fortified border and upgrading the North’s tattered infrastructure.

But such plans also require some of the sanctions to be lifted.

The South’s dovish President Moon Jae-in, who played a role of peace broker between the two mercurial leaders, met Kim three times last year – twice at the border truce village of Panmunjom and once in Pyongyang.

Kim sent Moon a message on Sunday, vowing to meet him ‘frequently’ to discuss denuclearisation.

Culminating in late 2017, the North has carried out six atomic blasts and launched rockets capable of reaching the entire US mainland, but has now carried out no such tests for more than a year.

fires, Jong, Kim, sanctions, Trump
You may also like: