BREAKING NEWS: Trump orders James Comey and the FBI lovers’ texts on Russia to be released in FULL in massive declassification of top-secret material he claims is behind Mueller probe

President Donald Trump directed the Department of Justice to release a host of documents related to the Russia probe on Monday, including texts between two former FBI officials who talked about stopping his rise to power.

Trump directed DOJ to declassify pages from a warrant from a secret court that allowed the feds to spy on former campaign adviser Carter Page and all of the interview reports the bureau prepared to go along with it.

The president told Justice to publish the reports tied to its interview with DOJ official Bruce Ohr, whose wife Nellie worked at the firm that put together the unverified dossier of dirt on the president, as well.

And in a further request he called for the release of text messages relating to the probe that were sent or received by ex-FBI director James Comey, whom the president last year fired. 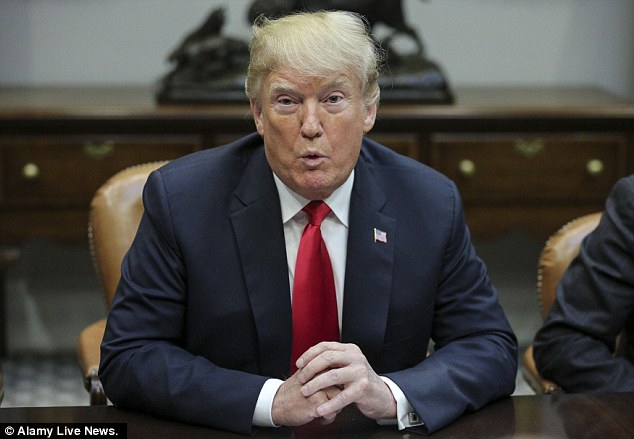 President Donald Trump directed the Department of Justice to release a host of documents related to the Russia probe on Monday, including texts between two former FBI officials who talked about stopping his rise to power

His announcement came the same day as Supreme Court nominee Brett Kavanaugh’s nomination ran off the skids, following a woman’s claim that he and a friend perpetrated a sex attack on more than three decades ago.

White House Press Secretary Sarah Sanders made the declaration in a statement as the president was speaking at Hispanic Heritage month event.

She said: ‘At the request of a number of committees of Congress, and for reasons of transparency, the President has directed the Office of the Director of National Intelligence and the Department of Justice (including the FBI) to provide for the immediate declassification of the following materials: (1) pages 10-12 and 17-34 of the June 2017 application to the FISA court in the matter of Carter W. Page; (2) all FBI reports of interviews with Bruce G. Ohr prepared in connection with the Russia investigation; and (3) all FBI reports of interviews prepared in connection with all Carter Page FISA applications.

‘In addition, President Donald J. Trump has directed the Department of Justice (including the FBI) to publicly release all text messages relating to the Russia investigation, without redaction, of James Comey, Andrew McCabe, Peter Strzok, Lisa Page, and Bruce Ohr.’

Two spokespersons for the Department of Justice did not immediately respond to comment directly after the announcement.

It was expected to take days if not weeks, though, for DOJ to put together all of the requested materials.

Trump was expected to demand the release of the documents relating to surveillance of his former foreign policy advisor and Ohr, a career Justice Department official who had contacts with the author of the Golden Showers dossier, any day.

Republicans running two key congressional panels have been pushing for the declassification for months, arguing that whey will reveal bias within the criminal justice system that Trump believes taints the Russia probe.

Axios reported Trump is expected to take the action this week.

The publication quoted conservative Freedom Caucus chair Rep. Mark Meadows of North Carolina saying: ‘After two years of investigations and accusations from both sides of the aisle about what documents indicate, it is past time for documents to be declassified and let the American people decide for themselves if DOJ and FBI acted properly.’ 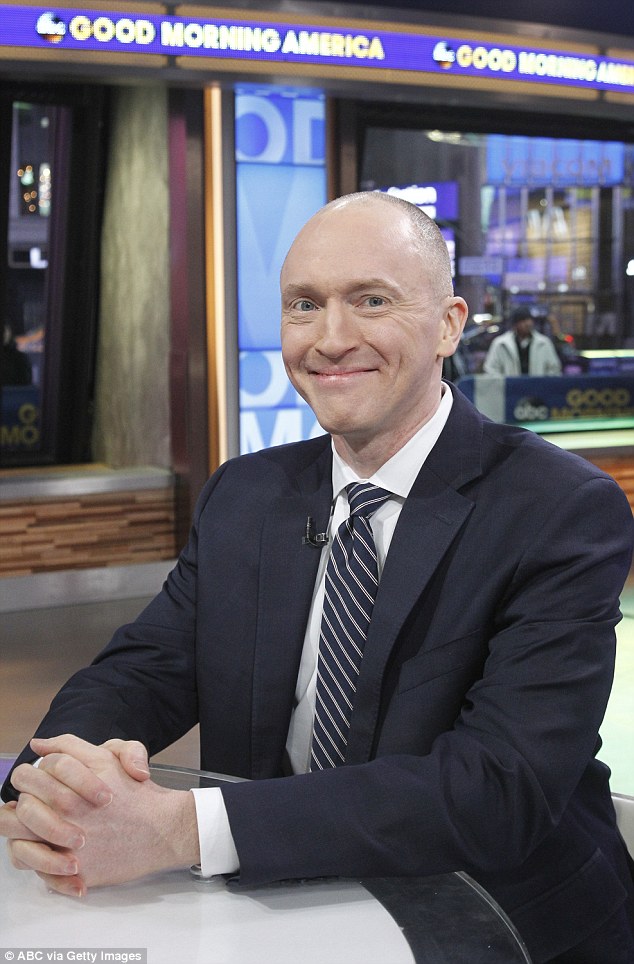 Trump has railed against Ohr, a career Justice official who ran an organized crime task force, over his contacts with ex-British intelligence officer Christopher Steele, who wrote the dossier alleging the Russians had compromising material on Trump.

Trump has regularly brought up that Ohr’s wife, Nellie Ohr, worked for Fusion GPS, the political intelligence firm that contracted Steele for the dossier.

Ohr and Steele also had communications during the campaign. In emails Steele wrote to Ohr seeking help identifying a contact …

Ohr told lawmakers Steele told him at a July 2016 breakfast that Russian intelligence believed ‘over a barrel,’ he reportedly testified to lawmakers. The breakfast took place after Kremlin-backed hackers had already stolen Democratic emails. 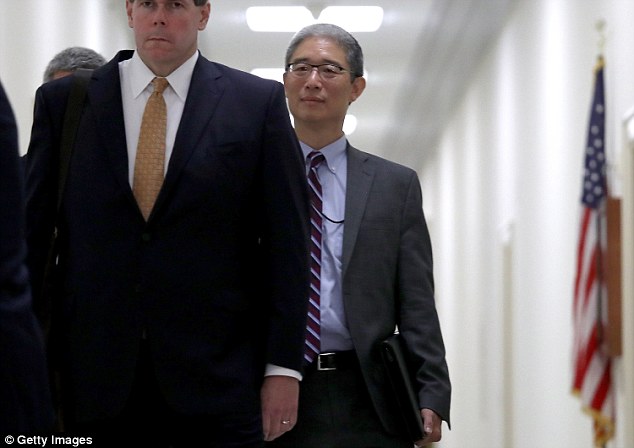 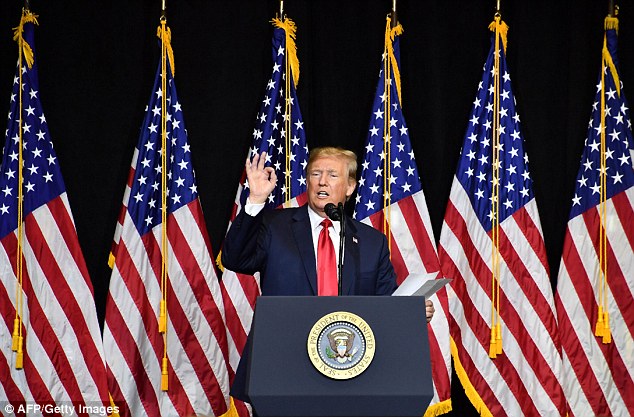 President Donald Trump has railed against Ohr on Twitter

Ohr acknowledged to Congress that he didn’t tell his superiors about what he learned from Steele.

Republicans have cited his meeting with Steele after the election and his failure to list his wife’s work on government disclosure forms as factors that taint the Russia probe, although there have been no indications he signed off on surveillance warrants or other materials at the start of the probe.

Ohr and Steele were both part of an effort to flip Russian oligarch Oleg Deripaska to try to secure cooperation against Russian President Vladimir Putin between 2014 and 2016, the New York Times reported early this month.

Trump and Republicans in Congress maintain that the FBI relied on the Steele dossier to get surveillance on Carter Page and start the Russia probe. FBI officials have testified that the dossier only corroborated information the bureau was already obtaining. 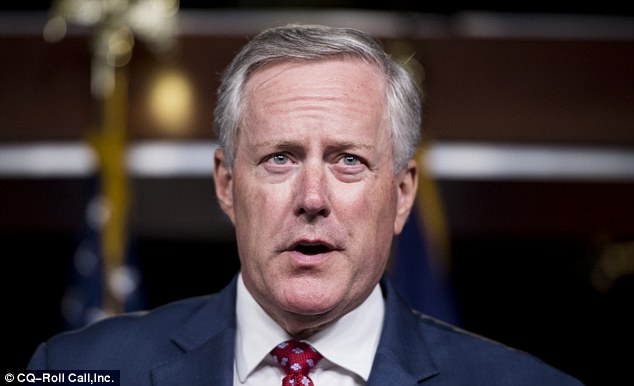 ‘After two years of investigations and accusations from both sides of the aisle about what documents indicate, it is past time for documents to be declassified and let the American people decide for themselves if DOJ and FBI acted properly,’ said Rep. Mark Meadows, a key Trump ally among House Republicans

Trump asked in a July tweet ‘how the hell’ Ohr was still working at the Justice Department, after including him on a list of officials who could lose their security clearances.

‘I think Bruce Ohr is a disgrace,’ Trump wrote. ‘I suspect I’ll be taking it away very quickly. For him to be in the Justice Department and doing what he did, that is a disgrace.’

‘Will Bruce Ohr, whose family received big money for helping to create the phony, dirty and discredited Dossier, ever be fired from the Jeff Sessions “Justice” Department? A total joke!’ Trump tweeted August 20.

Republicans also want to unseal documents related to surveillance warrants on Page, who an investor who advised Trump’s campaign. Page had lived in Russia, traveled to Moscow during the campaign, and had been suspected by U.S. counterintelligence of being a possible Russian agent since 2013.

Comey, FBI, lovers, orders, Trump
You may also like:

Fears of ISIL regrouping in Afghanistan after Syria defeat

There are 40 days until Brexit. Where do things stand?