Follow
Home » World News » Trump said the sheriff in Portland endorsed him. That’s not true, and the sheriff himself fact-checked the president on it. 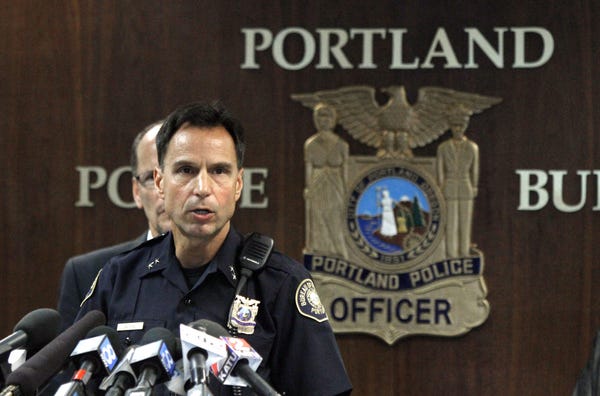 The sheriff who serves Portland, Oregon, called out President Donald Trump for saying during Tuesday's debate that he had the sheriff's support.

Mike Reese, who was previously the Portland Police Chief before taking over as sheriff, said that he did not and will not endorse Trump.

"In tonight's presidential debate the President said the 'Portland Sheriff' supports him," Reese said. "As the Multnomah County Sheriff I have never supported Donald Trump and will never support him."

During the debate, Trump boasted about military and police groups he said support him.

"Law enforcement, almost every law enforcement group in the United States. I have Florida. I have Texas. I have Ohio," he said. "Excuse me, Portland. The Portland sheriff just came out today and said 'I support President Trump."

Reese, though, insists that's not true.

The sheriff said Trump has only complicated his job since he started talking about the Pacific Northwest city.

"Donald Trump has made my job a hell of a lot harder since he started talking about Portland, but I never thought he'd try to turn my wife against me!" Reese said.

Portland has experienced months of unrest since the killing of George Floyd in May.

In addition to anti-racism protests, some which have devolved into riots, counterprotests from right-wing or pro-Trump groups have also been held in the city. Conflicts between the opposing groups have, at times, become violent.

In August, Aaron Danielson, reportedly a supporter of the right-wing group Patriot Prayer, was killed while taking part in a counterprotest

Michael Forest Reinoehl, who was under investigation for shooting Danielson, was killed by an officer in Lacey,Washington, when a federal fugitive task force, composed of members of the FBI and US Marshals Service, moved to arrest him.

Moderator Chris Wallace then asked Joe Biden, the Democratic nominee for president, whether he had reached out to the Democratic leaders of Washington and pressed them to allow the National Guard in to deal with the unrest.

"They can in fact take care of it if he'd just stay out of the way," Biden said of Trump.