By the time US President Donald Trump finished speaking to thousands of supporters at Omaha's Eppley Airfield on Tuesday night and jetted away on Air Force One, the temperature had plunged to nearly freezing.

But as long lines of MAGA-clad attendees queued up for buses to take them to distant parking lots, it quickly became clear that something was wrong. 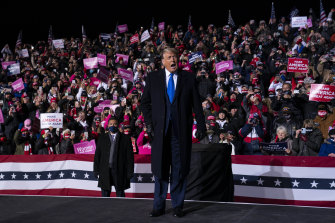 Buses couldn’t navigate the jammed airport roads to clear Trump’s supporters who turned out for his rally in Omaha.Credit:AP

The buses, the huge crowd soon learned, couldn't navigate the jammed airport roads. For hours, attendees – including many elderly Trump supporters – stood in the withering cold, as police scrambled to help the most at-risk get to warmth.

At least seven people were taken to hospitals, according to Omaha Scanner, a service that monitors official radio traffic. Police and fire authorities didn't immediately return messages early on Wednesday and declined to provide reporters on the scene with precise numbers of how many needed treatment.

The Trump campaign said it had provided enough buses but that traffic on the two-lane road outside the airport was throttled to one direction after the rally, tweeted Aaron Sanderford, a political reporter at the Omaha World-Herald. The campaign didn't immediately respond to a message early on Wednesday.

The confusion and the freezing weather added to the health risks that accompany every Trump rally during the novel coronavirus pandemic. In Omaha, an estimated crowd of more than 6000 people jammed into seats outside the airport. Though the campaign checked temperatures and provided masks, many people didn't wear them, the World-Herald reported.

In the lead-up to the rally, police warned that parking lots were full. With buses taking 30 minutes to ferry people about 5 kilometres away to the rally site, hundreds of attendees were late to get inside, reported Iowa Starting Line, a liberal news site. 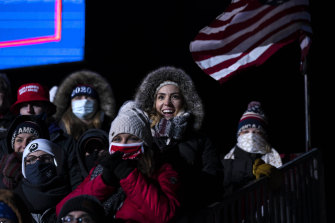 Conditions were near-freezing for the Trump rally at Omaha’s Eppley Airfield.Credit:AP

After Trump's speech, where he promised that "we're making that final turn" on COVID-19 in a state where positivity rates now exceed 20 per cent, per the World-Herald, Trump flew away on Air Force One around 9pm. Attendees began lining up for buses to return to their cars.

By nearly 10.30pm, though, there were still no buses in sight.

"President Trump took off in Air Force One 1 hr 20 minutes ago, but thousands of his supporters remain stranded on a dark road outside the rally," tweeted CNN's Jeff Zeleny.

Zeleny wrote that he watched one Omaha police officer shake his head at the "chaotic cluster" and say: "We need at least 30 more buses."

Soon, officers were radioing in about numerous elderly attendees struggling in the cold, according to Omaha Scanner. Police began shuttling some people to their cars to get them out of the elements.

"As we were walking, I saw at least two @OmahaPolice officers helping people who were getting cold, one elderly lady and a young boy," Sanderford tweeted.

The crowds didn't fully clear the rally site until after 12.30am – more than 3½ hours after Trump departed – Sanderford reported.

Some local Democrats blamed the President for the scene.

"Supporters of the President were brought in, but buses weren't able to get back to transport people out. It's freezing and snowy in Omaha tonight," tweeted Nebraska Democratic state Senator Megan Hunt. "He truly does not care about you."

Our weekly newsletter delivers expert analysis of the race to the White House from our US correspondent Matthew Knott. Sign up for The Sydney Morning Herald‘s newsletter here, The Age‘s here, Brisbane Times‘ here and WAtoday‘s here.

in, stuck, supporters, the, Trump
You may also like: