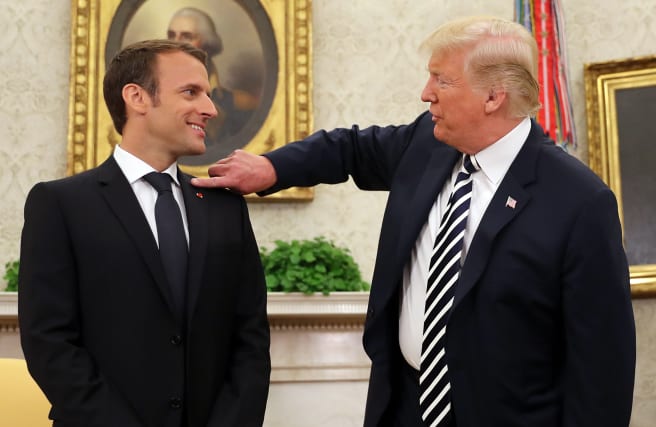 A bromance made in heaven?

A bromance is more than a friendship: it carries a whiff of the illicit, the sudden and the unexpected – the bombshell "pash" of (usually) one straight man for another. The love-in between presidents Donald Trump and Emmanuel Macron in Washington this week has been a textbook case and quite extraordinary to witness. 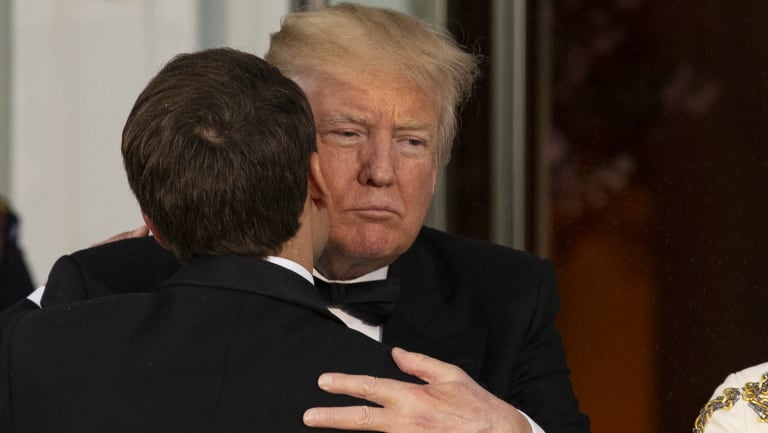 Then came the overcompensation. "We have to make him perfect," Trump blurted. "He IS perfect!"

Jeez: get a room.

But why Macron, when the American President could have his pick of strongmen and nationalists among the world's leaders to single out for a special relationship? The two disagree on policy in Iran and Syria, over climate change and trade.

What's more, Macron comes from a country anathema to Trump's electoral base, a nation of effete, snobbish, cheese-eating "surrender monkeys", whose refusal to back the invasion of Iraq in 2003 resulted in French Fries being renamed Freedom Fries in congressional cafeterias. In person, Macron is dapper, suave, reads philosophy and listens to classical music. He married an older woman because he loved her. He's the anti-Trump.

But in a bromance, opposites attract. Trump must crave some of Macron's youth and trim vigour. He most likely feels an ineffable pang (to which he will not be able to put a name) when confronted by someone with a sense of style and taste he could never emulate.

And consider the other men Trump loves. His sons Donald Jr (just 10 days younger than Macron) and Eric Trump look like botched wannabe versions of Macron and his daughter Ivanka's husband Jared Kushner. Trump detests effeminacy in men – it should be noted Steve Bannon and Sean Spicer had to go when Rosie O'Donnell impersonated them on Saturday Night Live. Macron's contained masculinity is appealing. Plus Macron is an outsider: unlike so many insiders, he will not "betray" this sensitive, snowflake president.

As a compulsive creator of chaos, Trump will also envy the apparent order of Macron's domestic record so far: imagine if the worst thing you had to worry about was a strike by rail workers, rather than mass shootings, a nascent race war and Stormy Daniels. Trump may also covet the appeal of a man who, like him, was elected by a groundswell movement that came seemingly from nowhere, but who is popular rather than merely populist.

Finally, it's worth noting that Trump is a prime candidate for a bromance, as he seems to view women as commodities or sex toys, rather than human beings he could truly relate to. Which may make it awkward when it comes to Prime Minister May's relationship with the hyper-masculine Trump. Can you imagine him tucking an out of place hair behind her ear? Exactly.

Of course, there have been other great bromances on the world stage. The one between Prince Harry and Barack Obama is ongoing; the one between Tony Blair and George W Bush was the opposite of Trump and Macron, with the younger, eager European the suppliant partner to the swaggering older American. We can see how bromances have flourished throughout history and in literature, too. Shakespeare's plays are full of men who strike up sudden, passionate relationships, as are the Greek myths. Again, here, it is perhaps useful to draw a distinction between bromance, and sexual love. Achilles was "in love" with Patroclus during the Trojan War, just as Antonio is in love with Sebastian in Twelfth Night. Hamlet and Horatio are friends, as are Ant and Dec and Socrates and Plato. But Falstaff and Prince Hal have a bromance, as do Sherlock Holmes and Dr Watson.

However, unless it develops into a proper friendship (see Barack Obama, again, and Joe Biden) a bromance will rarely last. It burns too hot and brightly to endure and can end in tears.