Trump’s new NATO attack: Montenegro could get aggressive, cause WWIII

Montenegro could get aggressive and lead us into World War III: Trump’s bizarre attack on a NATO ally after Fox News’s Tucker Carlson asks why should ‘my son go to Montenegro to defend it’

President Donald Trump questioned the Untied States’ responsibility to the security of its NATO allies again after a private meeting with Russia’s Vladimir Putin, despite saying days prior that he was ‘totally committed’ to the organization now that has increased its defense spending.

Trump told Tucker Carlson that he has ‘questioned’ the mutual defense pact, known as Article 5, that is strictly adhered to by all NATO nations after the Fox News host asked why his son should be enlisted to defend Montenegro if it’s ever attacked.

‘I understand what you’re saying. I’ve asked the same question. Montenegro is a tiny country with very strong people,’ Trump replied. ‘They have very aggressive people. They may get aggressive and congratulations, you’re in World War III.’

He said, ‘Now I understand that – but that’s the way it was set up.’ 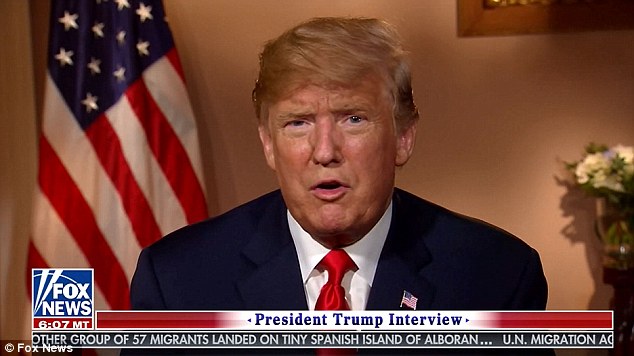 President Donald Trump questioned the Untied States’ responsibility to the security of its NATO allies again after a private meeting with Russia’s Vladimir Putin, despite saying days prior that he was ‘totally committed’ to the organization now that has increased its defense spending

A White House spokesman was unable to explain off-hand why the president holds the belief in the first place. However, an incident last year at the NATO summit could be related to the Trump claim.

Trump shoved Montenegro prime minister Dusko Markovic as he sought out his position in the security alliance’s group family photo.

The president had a smile on his face as he did, and Markovic said it was an ‘inoffensive’ gesture.

This year, Trump greeted him at NATO like an old friend with a pat on the shoulder and a jab.

At 600,000 people, the territory that became an independent nation in 2006 is comparatively small to its NATO counterparts. The Balkan state attended its second NATO conference last week in Brussels.

Trump was making a broader point about NATO and how much of the burden the U.S. shares when he insulted the Montenegrins in the interview with Carlson that aired Tuesday evening but had been taped on Monday in Finland.

He said that the cost-sharing until now was ‘very unfair’ because NATO nations ‘weren’t paying, so we’re not only are we paying for most of it, but they weren’t even paying and we’re protecting them.

‘Add that to your little equation on Montenegro,’ he stated.

Trump declined to call Russia an adversary in the same interview that was taped immediately after his explosive Helsinki press conference at which he created a firestorm by saying he believed Putin’s election meddling denials over the U.S. Intelligence community’s assessment he green-lit the hacking and leaking strategy.

Carlson asked the president if Russia was the nation’s ‘chief adversary’ during the interview.

‘Well they are a strong military,’ Trump said, complimenting Russia. ‘But their economy is much smaller as you know than China and I don’t want to even use the word “adversary,” we can all work together,’ he said.

‘We can do great. Everybody can do well and we can live in peace, but I think it’s very, very important and I’ve watched your show a lot and I see how you’re talking about the – really the magnificent size of China, you look at the size and what they’ve done in a fairly short period of time, that’s because of a lot of bad leadership on behalf of the United States. We allowed that to happen,’ Trump said. 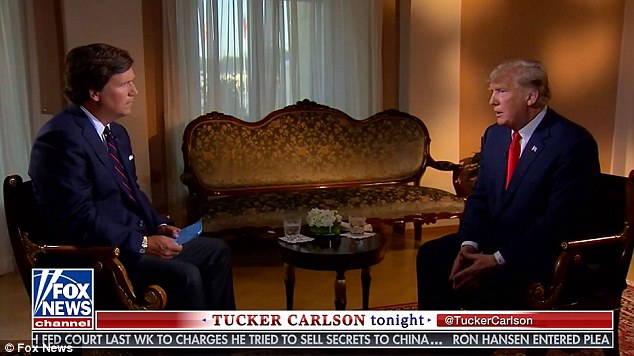 Trump conducted the interview with Fox host Tucker Carlson after his Helsinki press conference where he created a firestorm by saying he believed Russian President Vladimir Putin over the U.S. Intelligence Community, which concluded Russia did hack

The Fox host also asked Trump what he thought of the timing of the indictments of 12 Russian spies accused of carrying out the hack – perhaps suggesting the Justice Department wanted to influence his summit with Putin.  Trump was informed in advance.

‘Well, I don’t think of the timing as much as I think of other timing. Barack Obama was President. I wasn’t President when this happened. Barack Obama was the President of the United States when all of this – this was pre – this was when I was getting elected, so I was being elected, and I guess, I assumed this stuff all took place in that area or before,’ Trump said, keeping blame on his predecessor as he has done on Twitter.

‘And he was President and they informed him of it and he did nothing. And then after I won, see, he thought Hillary was going to win, after I won, he said, “Oh, this is a big deal..” Trump continued. 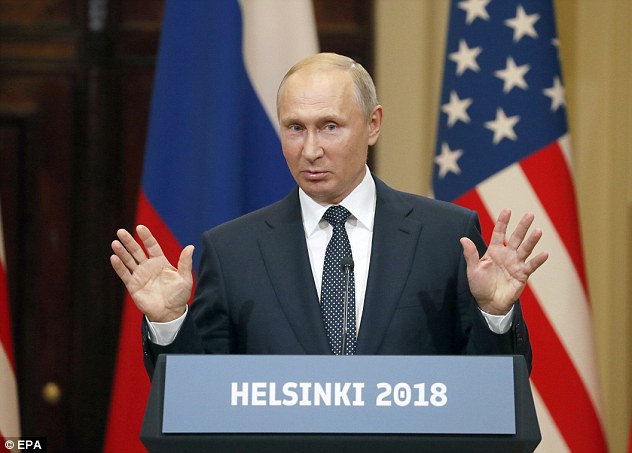 Putin is pictured during the joint press conference with Trump in Helsinki, Finland

‘Would be possible for you to direct the Department of Justice, FBI to take possession of the server and have, assuming no government investigators looked at it, which seems to be case right now, and gets to the bottom of it,’ he asked.

The DNC handed over data that a computer security firm pulled from the hacked server during the campaign, and the latest indictment makes detailed references to information on it. Trump brought up the server as well as raising a conspiracy theory about a Democratic IT staffer who worked for Democratic Rep. Debbie Wasserman Schultz and who pleaded guilty to a bank fraud charge.

So as I’ve told you and the answer is absolutely, it is possible, and maybe at some point, it will be done, but I’ve wanted to stay out. My Department of Justice is the one branch, the one group that I’m very little involved and the same with the FBI,’ Trump said, although he later laced into FBI lawyer Peter Stzrok.

‘Am I disappointed that they’re not looking at all of the crooked things taking place on the other side? Like the Pakistani man who left with these three servers- knew everything about Schultz, new everything, new Debbie Wasserman Schultz, and I think he had three servers. I believe they even have them, and they don’t want to use them, Trump said. 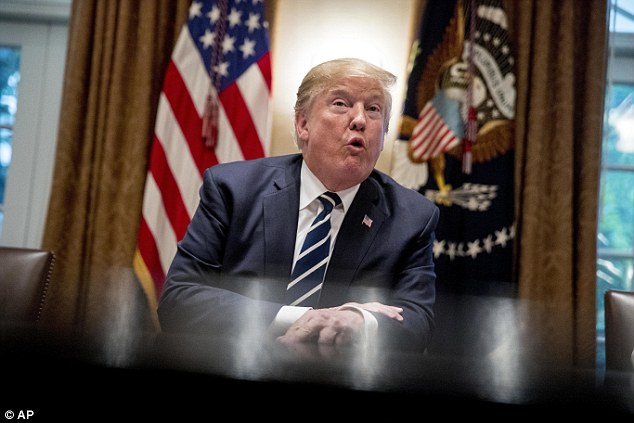 Carlson also brought up Trump’s rant about Democratic servers during his Helsinki press conference. Trump (pictured above) speaks to members of the media as he meets with members of Congress in the Cabinet Room of the White House, Tuesday 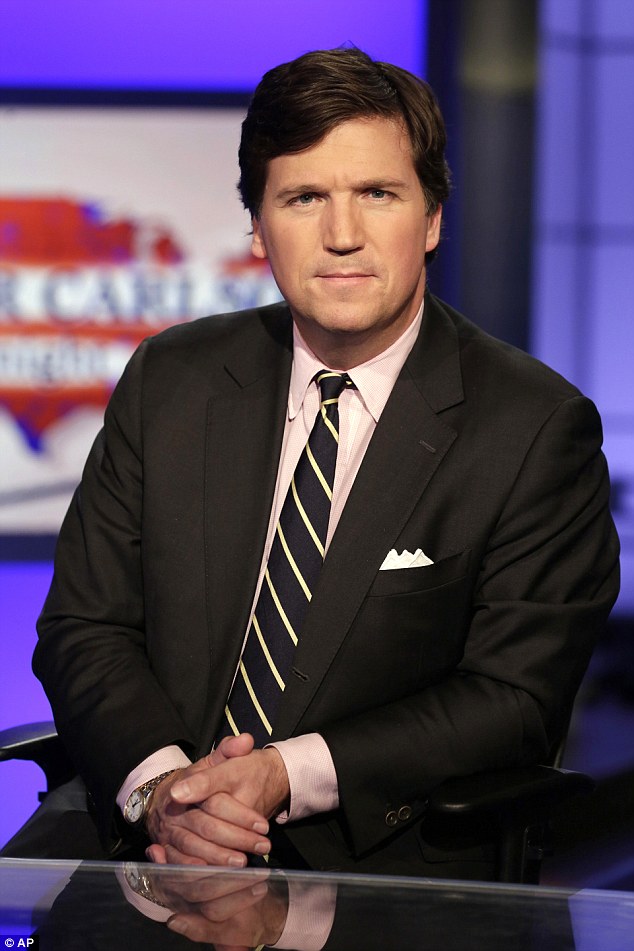 ‘As you traveled around Europe and looked at Europe over the years, can you think of a place that has been improved by mass immigration or movements of large embers of refugees?’ Carlson asked the president, who has said immigration is ruining Europe’s culture

‘Or the DNC, where the server was never taken by the FBI. They went in there and [Clinton campaign chair John] Podesta or somebody threw them out of the office. They said, “Get out of here.”

‘Maybe if they go after other people, like there’s no tomorrow. So, I have purposely – you understand that. I spoke to you about it before. As they said, “You’re winning, don’t get involved,” because I don’t want to have people accuse me of anything, so I’ve stayed very much uninvolved, but am I allowed to be involved? Totally. Will I be involved? We’ll have to see as it goes along,’ Trump said.

Carlson asked asked Trump why his son should ‘go to Montenegro to defend it from attack?’ – a reference to the Article V treaty obligations that commit all member nations to coming to defense of the others.

‘I understand what you’re saying. I’ve asked the same question. Montenegro is a tiny country with very strong people,’ the president offered.

‘Yes, I’m not against – or Albania,’ explained Carlson, mentioning another small nation on Russia’s periphery.

‘No, by the way … They have very aggressive people. They may get aggressive and congratulations, you’re in World War III, now I understand that – but that’s the way it was set up,’ he responded.

Trump turned on the ex-CIA director who accused of treason after his meeting with  Putin, telling Fox News in an interview airing Tuesday: ‘I think he’s a very bad person.’ 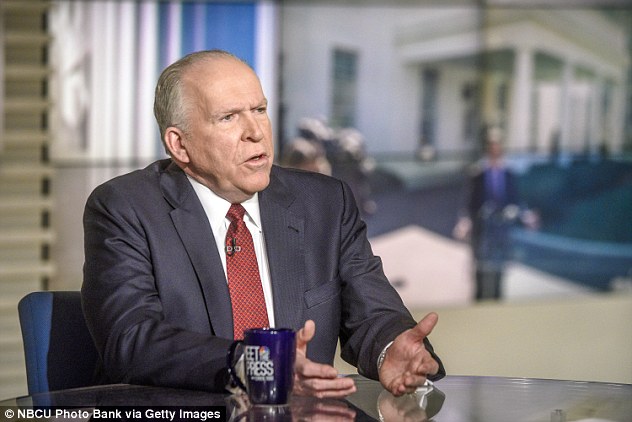 He slammed John Brennan repeatedly in comments released from his interview with Tucker Carlson, which he recorded immediately after one with the network’s Sean Hannity.

‘I think Brennan is a very bad guy, and if you look at it, a lot of things happened under his watch,’ Trump told Carlson.

Brennan’s tweeted criticism on Monday shortly after the press conference with the Russian president included a call for impeachment.

On Tuesday the former chief spy doubled down, telling NBC’s Today show that he was right to warn about treason.

‘When I use the term, this is nothing short of treasonous I equate it to the betrayal of one’s nation, aiding, abetting, giving comfort to an enemy,’ he said.

‘The president had the chance to warn Putin, to tell him, “Do not do this again” and he failed to even meet the minimum standards of that.’ 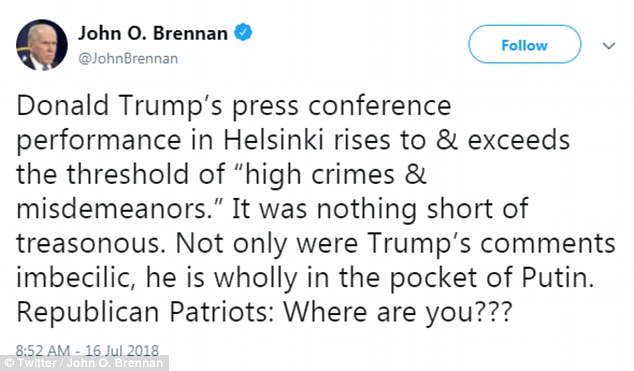 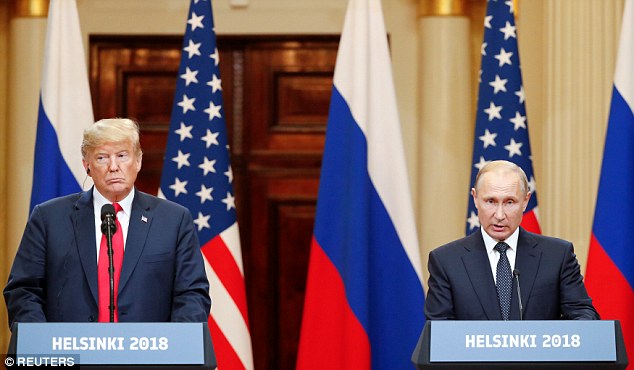 ‘I also think that when you watch Peter Strzok and Lisa Page, when you watch all of the things that have happened – Comey, you take a look at that and McCabe who has got some pretty big problems I assume, you look at the deception, the lies – these are people that in my opinion are truly bad people, and they’re being exposed for what they are,’ the president said.