Cabinet minister Liz Truss today refused to rule out quitting if Theresa May backs a permanent customs union to get a Brexit deal through Parliament.

Labour has demanded the concession from the PM along with close ties to the single market as the price of supporting her package.

Some senior ministers have signalled they would support the concession, although Mrs May has so far insisted she will stick to her red line.

Chief Secretary to the Treasury Ms Truss moved to harden the premier’s resolve today by hinting that she would not be able to stay in the government if the policy changed. 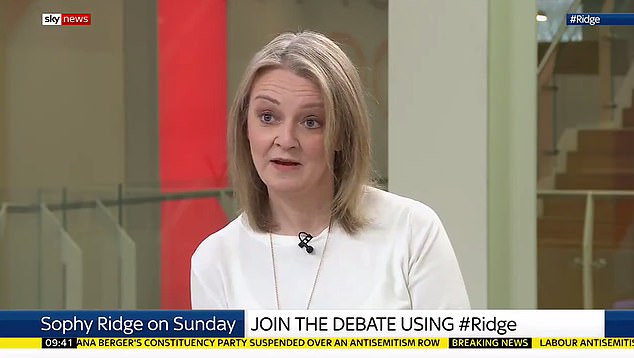 ‘I appreciate Jeremy Corbyn has come to the table but the reality is what he is proposing does not deliver on what we want as a country,’ she told Sky News’ Sophy Ridge On Sunday.

She added that she wants an ‘independent trade policy’ and questioned whether a customs union could command a majority in Parliament.

Asked if she could stay in office if that became government policy, she said: ‘I absolutely do not think that should be our policy.’

The intervention came as Mrs May pleads for MPs to give her more time to overhaul her Brexit deal.

An Opposition amendment being tabled for the latest round of high-stakes Brexit votes on Thursday would oblige the PM to bring her package back before MPs by February 26, even if she has not managed to get any more concessions from the EU.

The move comes amid fears that Mrs May is engaged in a ‘cynical’ attempt to run down the clock and leave politicians with a stark choice between her deal or crashing out on March 29.

But Mrs May is trying to calm a potential Tory mutiny by assuring her troops they will have another opportunity to vote by February 27, regardless of whether her renegotiation is complete.

The political wrangling escalated as business leaders warned that the UK was now in the ’emergency zone of Brexit’ with uncertainty damaging the economy.

Meanwhile, Remainer MPs are trying another tactic to secure a second referendum – suggesting they could back Mrs May’s plan in the Commons if she agrees to put it to the country afterwards. 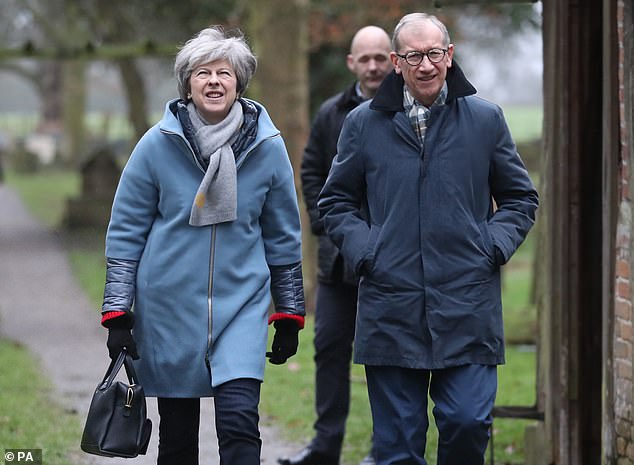 Theresa May (pictured with husband Philip at church in Maidenhead today) has promised another ‘meaningful vote’ in the coming weeks, but Labour is determined to reduce her wriggle room

What will happen next in the unfolding Brexit drama?

MPs will hold another round of votes on Brexit.

They are not due to pass judgement on Theresa May’s deal – instead debating a ‘neutral’ motion simply saying that they have considered the issue.

However, a range of amendments are set to be tabled. They could include proposals to delay the Brexit date beyond March 29.

Labour is pushing a change that would force another ‘meaningful vote’ on the PM’s Brexit deal by February 26, regardless of whether she has finished renegotiating the package with the EU.

Mrs May could have an opportunity to seal a new package with fellow EU leaders at a joint summit with the Arab League in Sharm el-Sheikh.

However, it is not clear how many will attend the gathering – or whether she will have completed the deal by then.

Downing Street is trying to head off a potential Tory Remainer mutiny by promising MPs will get another set of votes by this date regardless of whether there is a final deal.

The PM will attend a scheduled EU summit in Brussels that would effectively be the last opportunity to get agreement.

Some MPs fear that Mrs May is trying to delay for as long as possible, and might even try to hold a make-or-break vote in the Commons on March 26. That would be just 72 hours before Brexit, giving them a very stark deal-or-no-deal choice.

The UK is due to leave the EU with or without a deal, unless the Article 50 process is extended with approval from the bloc’s leaders, or revoked to cancel Brexit altogether.