A pair of women killed when their car crossed the centre line and collided head-on with a truck are believed to be Australian tourists who had only just arrived in the country.

The women, both aged in their 50s, were travelling south in a rental car when they veered into the path of an oncoming TNL Freighting truck on State Highway 1 at Bankside corner, north of the Rakaia River on Sunday.

The crash sent the truck careering across the road, ploughing through a fence on a grass verge and tipping onto its side on nearby railway tracks. 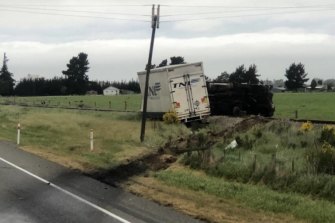 The two Australian women aged in their 50s have died when the rental car they were travelling in veered into the path of an oncoming truck south of Christchurch, New Zealand. Credit:Stuff

Police acting area commander for rural Canterbury Natasha Rodley said the driver of the truck and trailer – its sole occupant – escaped serious injury, despite the vehicle careering across the road, ploughing through a fence on a grass verge and tipping onto its side on the railway tracks.

"The truck driver was shaken but OK. He was very lucky indeed," she said. "He was checked over but did not need any further treatment."

Both women died at the scene. Rodley declined to comment on whether they were tourists or if they were driving a rental car. 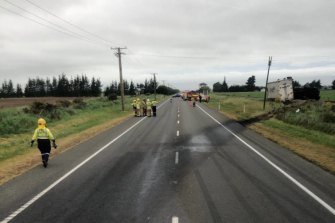 The scene of the crash.Credit:Stuff

Eight nearby properties were temporarily left without power after the truck damaged a power pole.

The accident happened at about 8.50am at Bankside corner, north of the Rakaia River.

Rodley told Stuff the women's car was travelling southbound on the highway when it crossed the centre line and collided with a TNL Freighting truck, sending it skidding across the opposite carriageway and off the road.

A car travelling behind the women was caught up in the crash, leaving the occupants with minor injuries, while another car further back was struck by debris.

Ambulance staff treated people at the scene for minor bruising but none needed to be taken to hospital.

Rodley said it was uncertain what had caused the crash.

"We are not certain if speed was involved but that will be part of our investigation.

"The serious crash unit didn't give an indication of that and there is nothing from witnesses to indicate speed played a part."

The road remained closed early on Sunday evening, while the railway line was reopened at about 6pm. A Kiwirail spokeswoman said rail services had not been affected.

The crash takes New Zealand's road toll for the year to 287, including a motorcyclist who died on State Highway 4 in Whanganui on Saturday and a man who died after crashing into a parked truck in Auckland on Sunday.

Forty three of those have been in Canterbury, three more than the whole of 2018, according to the Ministry of Transport.

A number of fatal crashes have occurred on SH1 south of Christchurch in recent years. In July a woman died after her car collided with a small truck in Rolleston, while a man was killed in January when his car ploughed into a truck that was carrying other vehicles.

Australians, head, in, killed, two
You may also like: