TWO MILLION European citizens have ask to STAY in the UK after Brexit with more than 500,000 applying to the settlement scheme last month alone ahead of Brexit deadline

More than two million European citizens have asked to stay in the UK after Brexit, new figures revealed today.

More than 500,000 people applied for the Government’s EU Settlement Scheme in September alone, with the Brexit deadline approaching in October, according to numbers released by the Home Office.

Poles, Romanians and Italians were the three most represented nationalities on the scheme open to foreign nationals from countries in the EU, the European Economic Area (EEA) and Switzerland.

Home Office minister Brandon Lewis said: EU citizens are our friends, family and neighbours and we want them to stay.’ 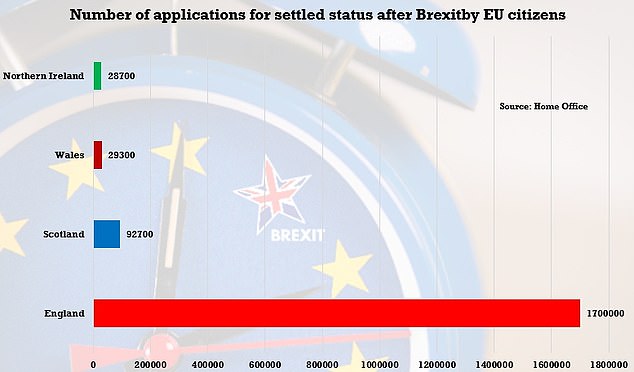 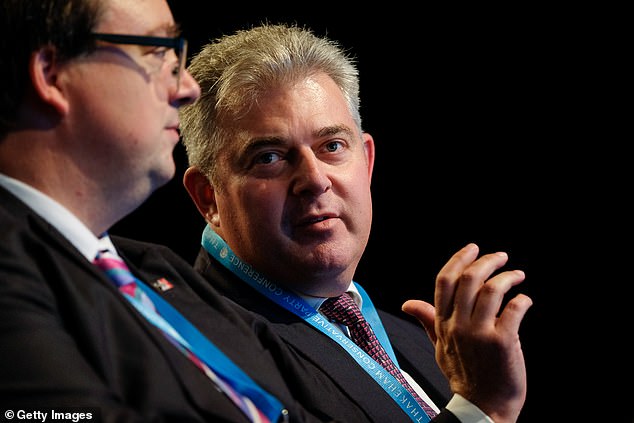 Home Office minister Brandon Lewis said: EU citizens are our friends, family and neighbours and we want them to stay.’

But the Liberal Democrats said the numbers showed that 2.7million of the 3.6million EU citizens in the UK were yet to receive settled status.

Home affairs spokeswoman Christine Jardine said: ‘Hundreds of thousands are being given second-class ‘Pre-Settled Status’, which means they will face a new cliff-edge in five years. That’s another disaster waiting to happen.’

A total of 1,860,200 applications had been received by September 30, Home Office data published on Wednesday said.

But latest internal figures showed the total had since risen to two million, the department announced. Some 520,600 were received in September.

Overall, the total number of applications finalised by the end of September was more than 1.5 million (1,524,500).

Just two applications were refused on ‘suitability grounds’, according to the statistics.

Once granted the status, people can live and work in the UK, use the NHS, study and access public funds and benefits, as well as travel in and out of the country.

Around 88,500 eligible applications were also received from people living outside the EEA.

The scheme allows non-EEA relatives of EEA and Swiss citizens who all currently live in the UK under EU law to apply and obtain a status.

The figures are classed as experimental because they still in the testing phase and not fully developed so should be ‘treated with caution’, the Home Office paper warned.

EU citizens and their families have until at least December 2020 to apply to the EU settlement scheme.

The scheme asks applicants to prove their identity, demonstrate they live in the UK, and declare any criminal convictions.

A series of events to provide information about the scheme are to take place in Tower Hamlets in London, Aberdeen, Glasgow, Nottingham, Leeds and Birmingham, the department said, while there will be more adverts in the coming weeks as part of a £4 million marketing campaign.