Two off-duty police officers have been caught flouting social distancing rules after they were photographed posing with friends and drinking cocktails during a garden party.

Emily Watson, 22, and Julie Hand, 23, were spotted sitting next to one another with four friends standing behind them, all holding drinks in plastic cups.

The photo of the two cops, from Midlothian, Scotland, was posted to Instagram but later deleted after it was reported to the police. 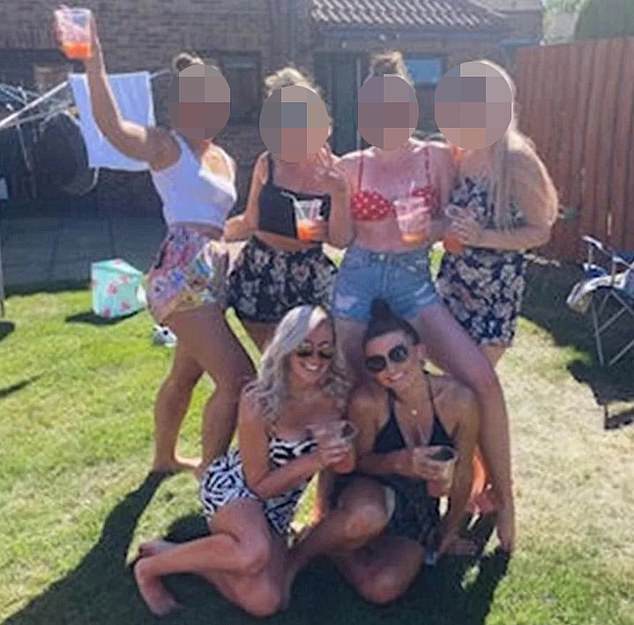 Emily Watson, 22, and Julie Hand, 23 (both pictured bottom centre) were spotted sitting next to each other with four other friends standing behind them, all holding drinks in plastic cups

Police Scotland said the pair have since been spoken to by bosses.

A source told The Sun: ‘Both of the girls have been out enforcing these rules and all the while they’re living it up with mates.

‘To see them brazenly huddle together for a photo without taking their own advice is just unbelievable and deeply concerning.

‘Their behaviour could put others at risk.’

It follows Scottish First Minister Nicola Sturgeon easing lockdown in Scotland, with up to eight people allowed to mix in parks and gardens.

She said two households are permitted to meet up, while obeying social distancing rules. Although there will be no legal limit she urged them to keep numbers to eight or lower. 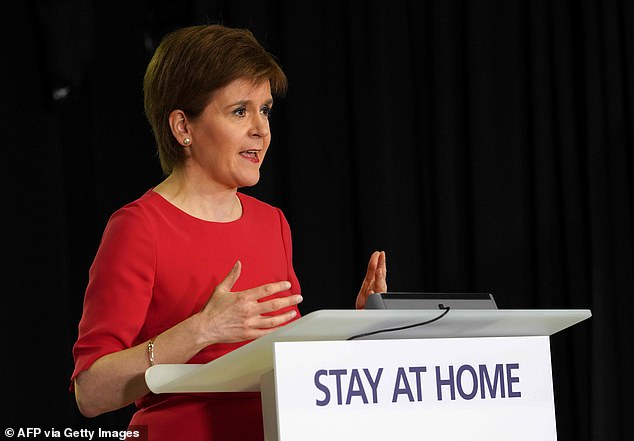 Scotland’s First Minister Nicola Sturgeon speaking by the country’s continued ‘stay at home’ slogan. A gradual relaxation of lockdown rules began in the country on May 29

Sports such as tennis and golf will also be back on the table, but Scots are being encouraged not to travel more than five miles from home apart from for essential work. Schools will not be reopened until August 11, after scheduled holidays.

But Ms Sturgeon has since warned she is willing to make it illegal to breach lockdown rules following widespread flouting of the guidelines.

Police Scotland revealed it issued almost 800 dispersal notices on Saturday as beauty spots like Glencoe and Loch Lomond filled up with visitors.

The numbers, a five-fold increase on the same day the week before, came the day after the Holyrood administration eased restrictions.