Two people in a coronavirus cluster that has spread "rapidly" in Melbourne's south-east have been admitted to hospital, as authorities ramp up testing in an effort to contain the outbreak that has infected 34 people across five households.

Visits between homes, in breach of Melbourne's lockdown rules, have been blamed for sparking the fast-growing cluster, which now spans the suburbs of Hallam, Clyde, Narre Warren South and Cranbourne North. 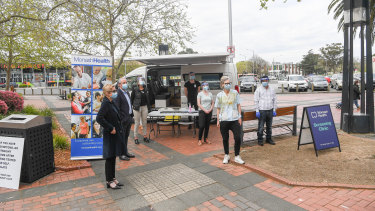 A pop-up coronavirus testing clinic was opened at Dandenong Mall on Friday, amid increased efforts to stem the cluster in Melbourne’s south-east.Credit:Justin McManus

The new cluster has raised fears that another outbreak could push up Melbourne's daily case numbers and compromise the city's planned road map out of lockdown.

At four of the five households, all family members have contracted COVID-19, according to head of infection control and prevention at Monash Health, Rhonda Stuart.

Two people, both aged under 50, have been admitted, with one of them presenting to the emergency department on Friday morning after experiencing a shortness of breath. They are both in a stable condition.

People travelling more than five kilometres from their home and having "limited" contact with other households – both in breach of Melbourne's stage four restrictions – have been blamed for the cluster. 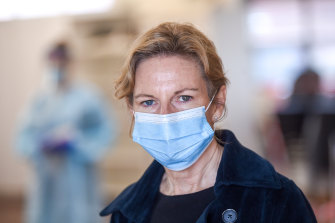 Rhonda Stuart, the head of infection control and prevention at Monash Health, is hopeful that the Casey cluster has been contained.Credit:Justin McManus

Premier Daniel Andrews sharply rebuked those who had breached restrictions by visiting others.

"Visiting others is the real issue here, frankly. The rules are in place by reason and anyone who undermines this, undermines the entire strategy," he said.

"If you break the rules, particularly if you are breaking the rules in your home or somebody else's home, where there is no infection control, there is no formality, it is by its very nature, close contact for potentially prolonged periods, all you will do is spread this virus."

He reiterated the importance of testing for avoiding a rapid increase in cases, as happened in the north-west of the city during the second peak of the pandemic.

"I cannot rule out, and none of us would rule out, that there may be additional cases beyond the 34. That's why it is so, so important if you have any symptoms at all … come forward and get tested. That is how you keep it at 34 and not see the things spread out to 340."

However, the government would not fine members of the households involved in the cluster who were found to have breached restrictions, according to Jeroen Weimar, a former departmental secretary now responsible for the state's testing strategy.

"People who come forward for contact tracing, who say they are infectious … that information is far more important than a fine," Mr Weimar told 3AW.

He said visits between homes had enabled rapid and widespread transmission of the virus.

"When we see households communicating with each other, the bubble spread out much more quickly and rapidly and in this case over a very large area," Mr Weimar said.

The Victorian government has set up an extra four testing facilities in the Casey and Dandenong local government areas, bringing the total number of sites to 11.

In a shift from its current model, the Health Department has been working with Monash Health, refugee services, local councils and community leaders to track and trace close contacts of the confirmed coronavirus cases.

There were no new cases associated with the Casey and Dandenong cluster on Friday, but authorities are still urging anyone in the area with symptoms to be tested, including those who had visited Fountain Gate shopping centre, which has been identified as a high-risk exposure site.

A number of doctors working in the area are concerned social distancing rules have not always being adhered to, particularly by young people.

Dr Amena Azizi, a GP in Narre Warren South, said she was surprised to visit a shop in Dandenong in July where she found 16 people within a very small space. "I was shocked," she said.

Community leaders this week told The Age they believed families in the area's Afghan community were among those infected, and Victorian Chief Health Officer Brett Sutton said he had made an offer to personally speak to that community.

Dr Abhi Verma, a spokesman for the Royal Australian College of General Practitioners, said some people in the fast-growing multicultural area could be sceptical of health messaging and that language barriers made it even harder to explain to people "what's real and what's not".

"I'm sure you’ve heard numerous conspiracy theories … that it's a manufactured virus … or it's a government control thing.

"There’s no getting away from the fact that these attitudes definitely exist in the community."

The GP, who practises in the multicultural communities of Narre Warren and Fountain Gate, said while some of his patients had understood public health messages, some older people in particular had low "health literacy".

"They really do struggle. They don’t understand the concept of flattening the curve and what the restrictions are for and why we need to cover our face with a mask," he said.

Dr Verma said some also had lower-paid jobs or were in casual work, leading them to put health concerns on the "backburner".

"They may be doing things like Uber driving … there is a financial imperative for them to keep going to work, or they don't get paid," Dr Verma said.

Mr Andrews said efforts had been made to provide coronavirus information "in as many languages as possible" and said he did not believe there were "large groups of people out there who don't know there's a pandemic and who don't know there are rules".

Monash Health’s manager of refugee services, Jacquie McBride, said her department had been working with the families at the centre of the outbreak to make sure they had sufficient food and support.

"We have a lot of experience working with people who come from different environments, different countries and speak different languages," Ms McBride said.

"Our role is to really connect with the families identified, make sure they're well, have conversations with them, make sure they’ve got the support at home, food supplies they need to eat, and any of their other needs that can be addressed … but also that they understand the message that is being delivered."

Casey, cluster, in, people, two
You may also like: