Thousands flocked to parks last weekend to take advantage of the warm weather despite Government advice to limit movements and contact with other people amid the coronavirus outbreak. The ongoing lockdown has seen the public instructed to stay indoors as much as possible and this weekend you might want to keep the heating on a little longer.

A high-pressure system forming to the west of the UK will bring cold air to the country.

The Met Office warns that on Saturday night, it could be as cold as -4C in sheltered rural spots.

Across the country, temperatures will fall close to freezing.

There’s even a risk of hail and snow along the eastern coast and inland on Sunday, and these will become more confined to high ground in the north later in the day. 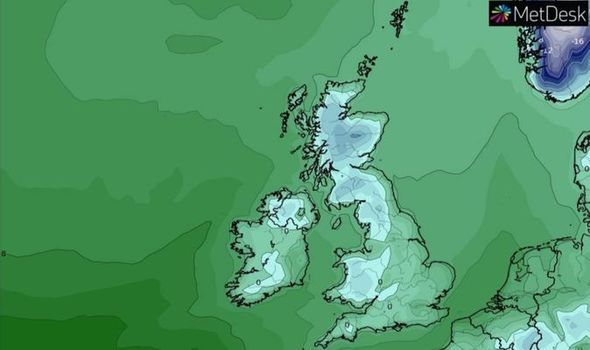 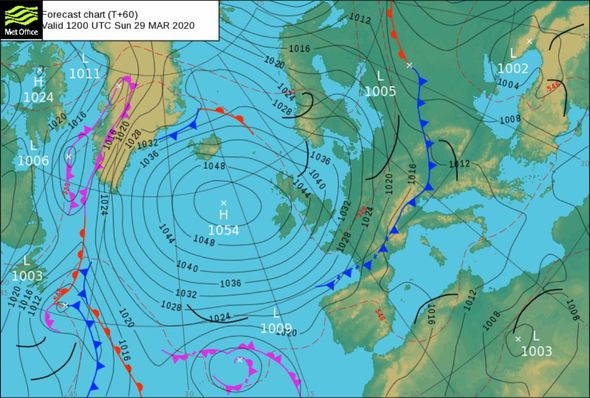 Temperatures by day on Sunday will struggle to reach double digits, the keen northeasterly wind making it feel colder.

Met Office Chief Meteorologist Dan Suri said: “It will stay drier and brighter elsewhere, even so, it will be a marked change from the 18 or 19C we have been seeing in a few spots this week.

“This cold, bright weather is due mainly to a high-pressure system that is developing to the west of the UK, which will bring cold air down from the north”.

The start of next week will continue to stay dry and settled with variable amounts of cloud and sunshine, but temperatures will stay cold for the time of year. 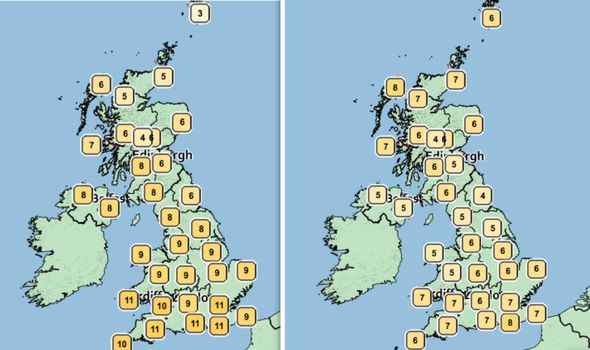 Netweather’s Paul Michaelwaite says parts of the country will start feeling the cold from tonight.

He said: “Overnight tonight, the weather front in Scotland finally makes more of a move south, heading down through Northern England.

“There’ll be more in the way of cloud due to this and the easterly wind, so the frost will be more patchy than it’s been in recent nights.

“The colder air will also arrive behind the front, and that’s going to dig south during Saturday.”

This weekend, the south of the UK will see highs of between 10 and 12C.

Temperatures in the north will generally remain in single digits.

In the northeast, taking the wind chill into account, will feel “sub-zero”, says Mr Michaelwaite.

But that doesn’t mean there won’t be any sunshine, with western and central areas forecast to enjoy some sun over the weekend, but there will also be some wintry showers in the colder areas of the UK. 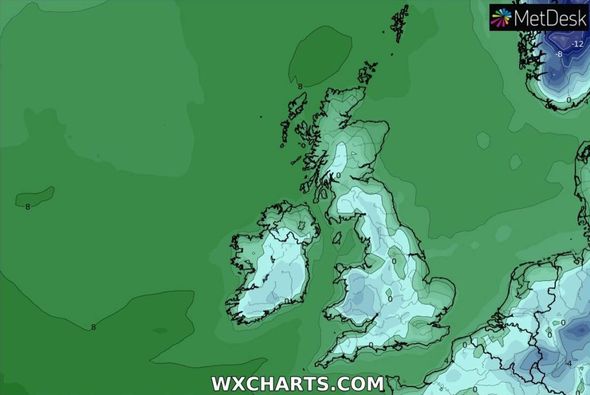 Mr Michaelwaite said: “With the cold, there’ll also be some wintry showers about.

“They’ll generally be limited to eastern, and especially northeastern regions, but a few may make it further west.

“It’ll be western and central areas which enjoy the best of the sunshine, although with the weather front still sinking south through England and Wales during the day, there’ll be a good amount of cloud about until it clears.

“A widespread frost follows on Saturday night, although with more cloud and wintry showers feeding in off of the North Sea, eastern regions will stay a touch milder.

“Then into Sunday, we’ll continue to see more showers in the east and northeast, with sunny spells elsewhere. And it’ll still be feeling cold.

“For the start of next week, we keep a similar theme going, with varying amounts of cloud drifting about by this stage.

“There’ll still be some showers in the east and north, perhaps spreading to other parts at times and we’ll keep the cold air in situ.”