Low pressure will push cold air towards south western parts of the UK during October. Cold weather maps from WXCHARTS show temperatures plunging to 0C in central parts of Scotland as early as next Friday. North western regions of England including Liverpool and Manchester will be hit with lows of 2C, while south eastern areas including London and Surrey will shiver at 4C.

The BBC’s long-range forecast from Monday, October 12 to Sunday, October 25, warned Britain will be hit by a cold plunge.

It said: “The week beginning 19 October ought to see a change, with the highest pressure close to the southwest of the UK, while we see low pressure strengthening over Scandinavia.

“This pressure contrast will bring brisk west or northwesterly winds to the northern half of the UK and we can’t rule out a temporary cold northerly plunge for a couple of days.

“Bands of rain across the north will be interspersed with some showery interludes, with hail and even a crack of thunder at times. A greater number of drier, calmer and fairly sunny days over the southern half of England and also Wales, due to high-pressure ridging being close by.” 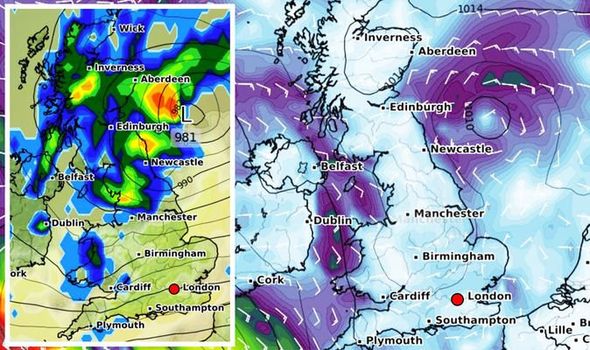 The forecast said: “An unsettled picture is likely for this period, with all parts of the country seeing showery spells as well periods of more prolonged rainfall at times.

“However, southern and western areas are expected to see the worst of these conditions with the most frequent and heaviest rainfall.

“Drier and calmer conditions could be seen at times, but likely only for short interludes.

“It will often be windy during this period, with a risk of gales at times, particularly along western and southwestern coasts. 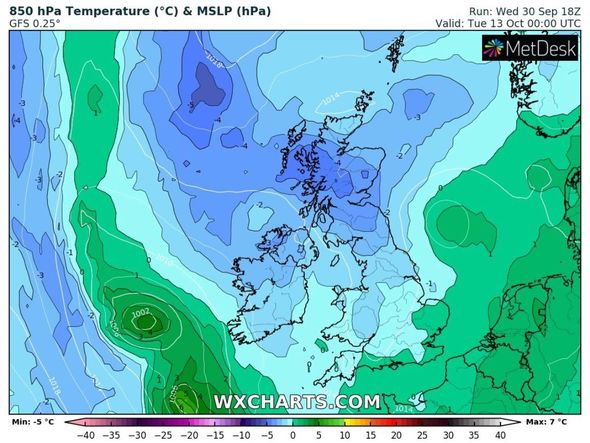 “Overall, it is likely to feel rather cold as temperatures look set to be around average or below. During any of the brief calmer interludes overnight frost is also possible in the North.”

The long range forecast from Net Weather between Monday, October 19 and Sunday, October 27 also the cold temperatures will linger towards the end of the month.

The forecast said: “A relatively quiet spell is expected early in the period with south-easterly winds, but unsettled weather and low pressure will probably return from the west late in the period, with the Scandinavian blocking high either moving away eastwards or retrogressing towards Greenland (the latter scenario will most likely trigger a battle between warm tropical maritime and cold Arctic air masses). 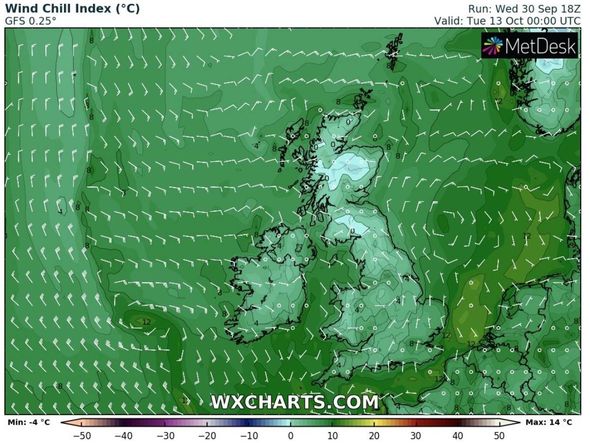 “Temperatures are expected to be near to slightly above normal overall, but with potential for northern Scotland to end up colder than average, should the Scandinavian high head westwards towards Greenland.

“Sunshine totals are expected to be generally below normal.”

Before the low temperatures arrive, the rest of this week will be battered by rain and powerful winds. 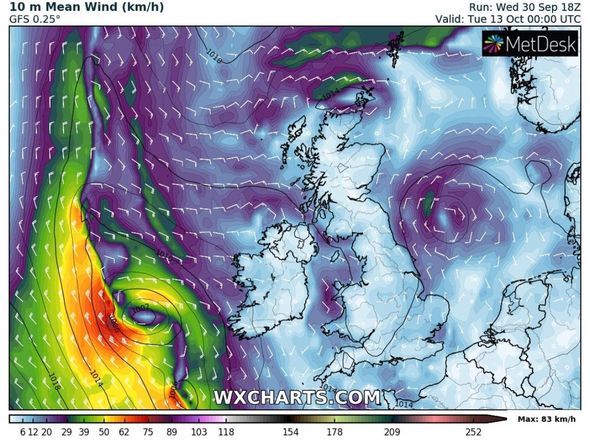 Netweather’s Nick Finnis said: “The weather is set to turn increasingly unsettled, windy and cooler through the rest of the week and into the weekend, as a powerful jet stream crossing the Atlantic takes aim at western Europe and deep low pressure takes control close to the UK.

“Rain will spread eastwards through today, accompanied by gusty winds.

“Thursday is looking somewhat drier and sunnier, though there will be scattered showers, frequent in the southwest.

“The weather going downhill quickly on Friday in the south, as a deep low pressure moves up from NW France bringing heavy rain and gales, drier and brighter in the north. Wet and windy conditions spread north across all parts on Saturday, turning more showery on Sunday, cooler across all parts.”