The Met Office has issued 14 weather warnings as forecasters warn of "danger to life". 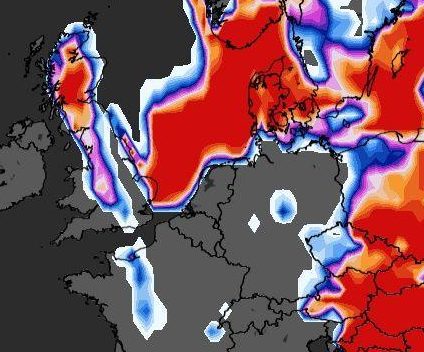 A "500 mile curtain of snow" is hitting the UK, with warnings for freezing rain issued for most of the country.

Last night, Police Scotland said there has already been several accidents on the M74, and have also warned motorists to avoid the "treacherous" A9.

The Met Office has issued multiple Amber weather warnings across most of Scotland, Northern and Central England for freezing rain – a rare phenomenon where ice sheets known as black ice instantly form on roads.

A fourth Amber warning for heavy snow and blizzards was also released yesterday for Scotland as areas barely reach temperatures past freezing. 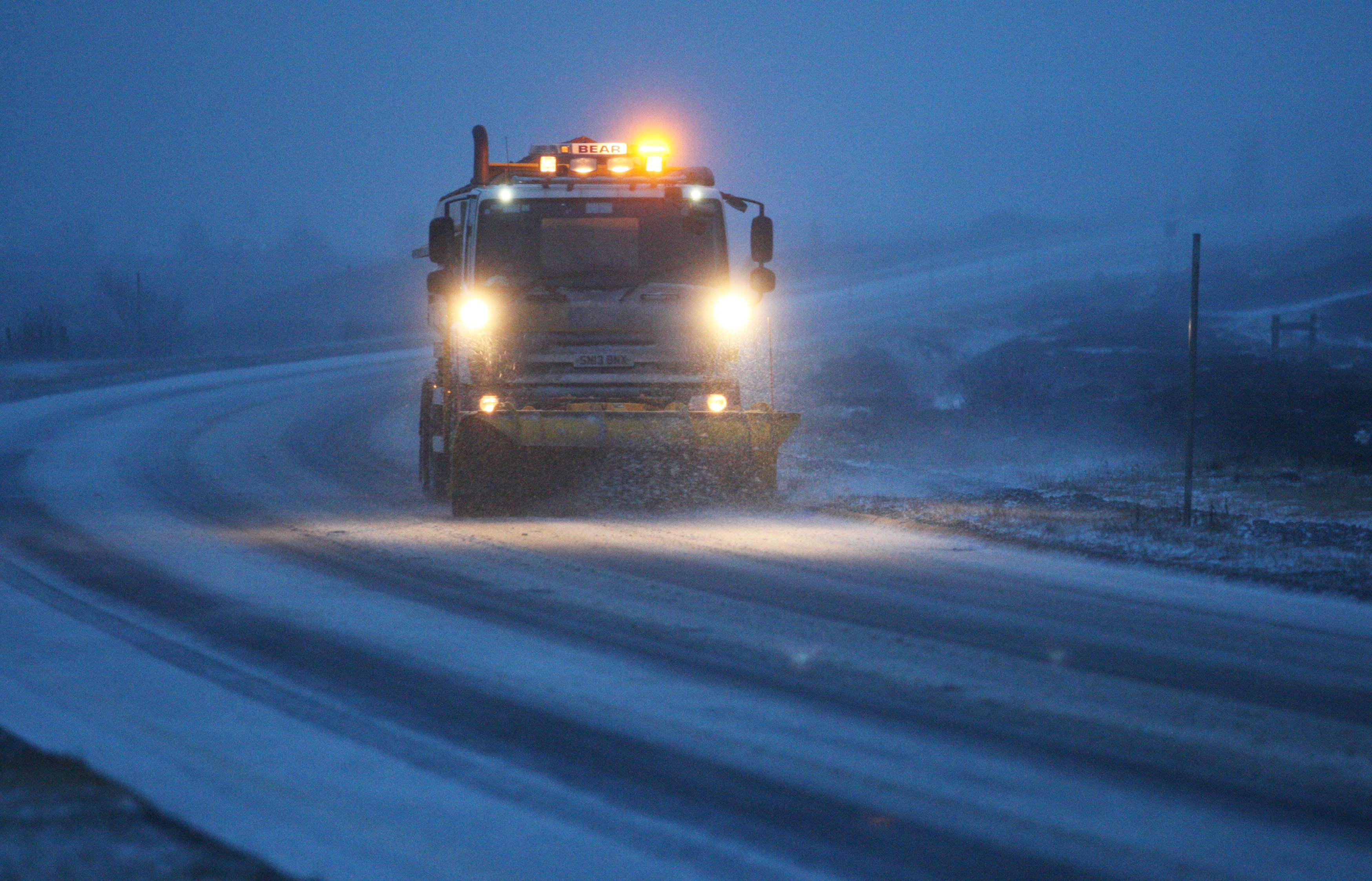 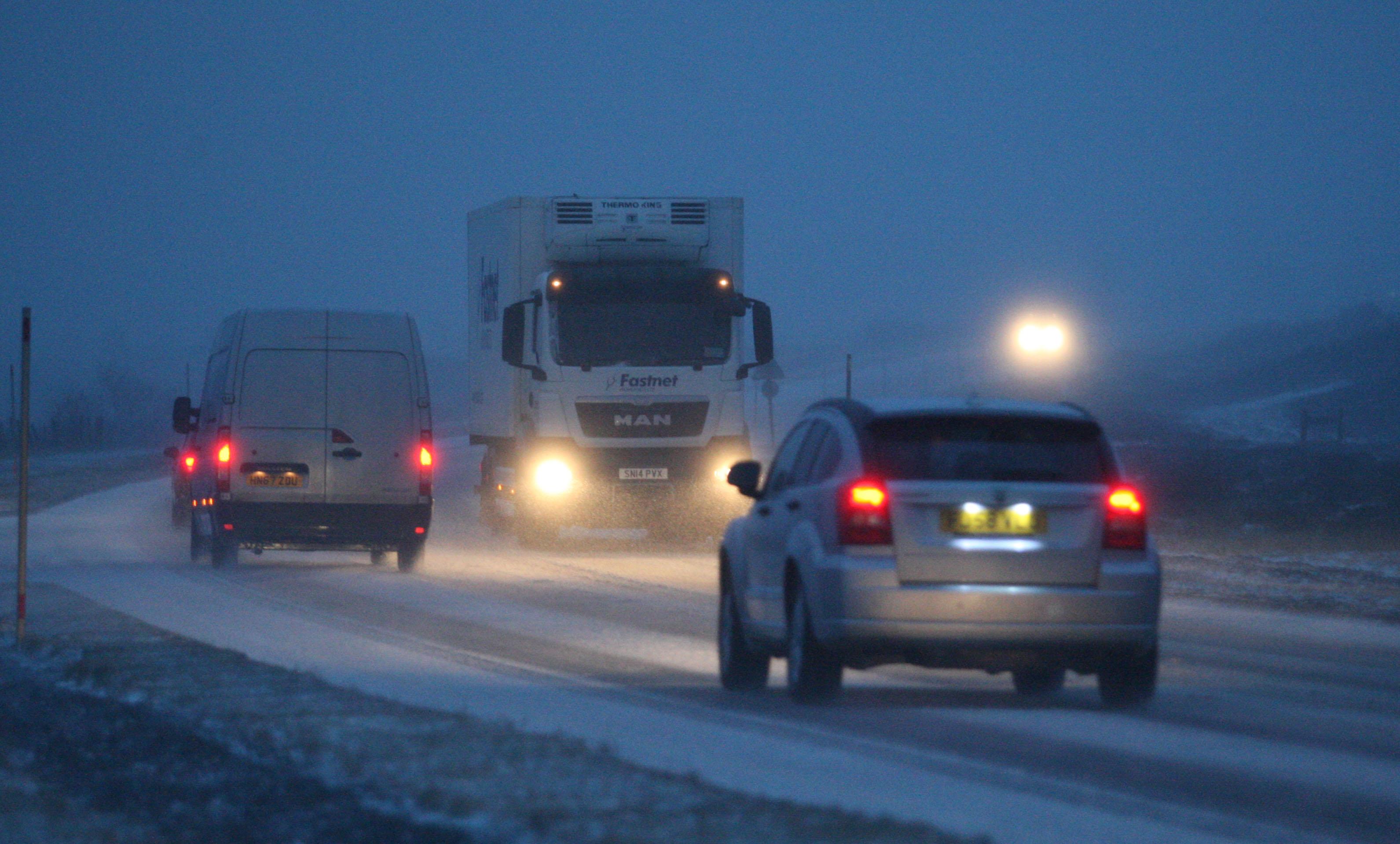 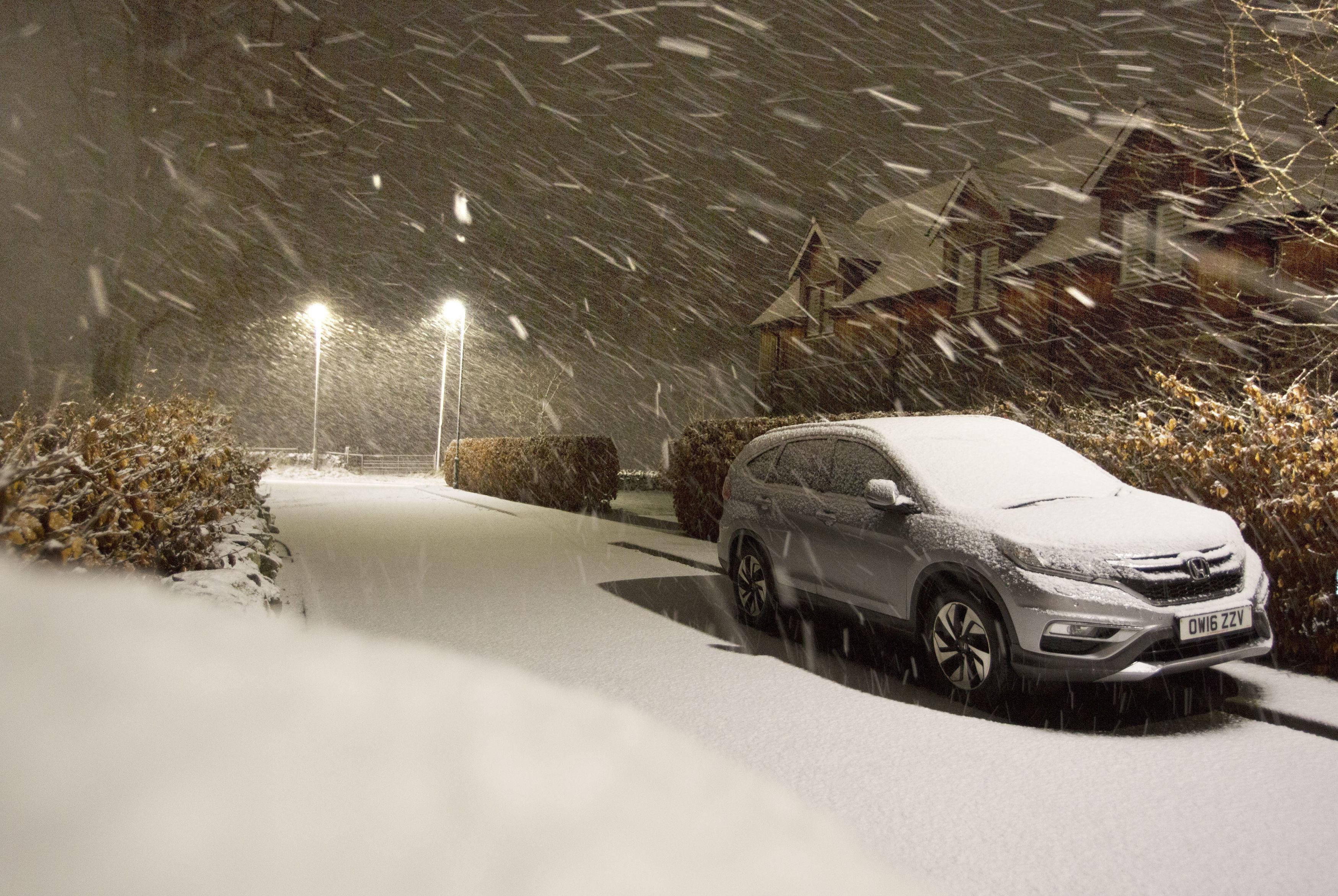 Ten yellow warnings are also in place – forecasting snow, strong winds and heavy rain to hit most regions of Scotland, Wales and the Yorkshire and Humber area.

Up to 15 inches of snow is expected to fall on the highest peaks in Scotland, while 8 inches will hit higher ground. 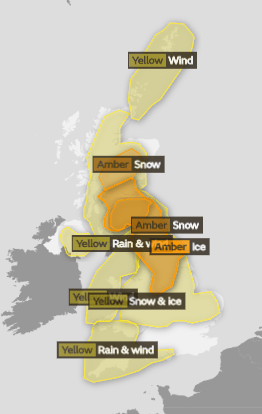 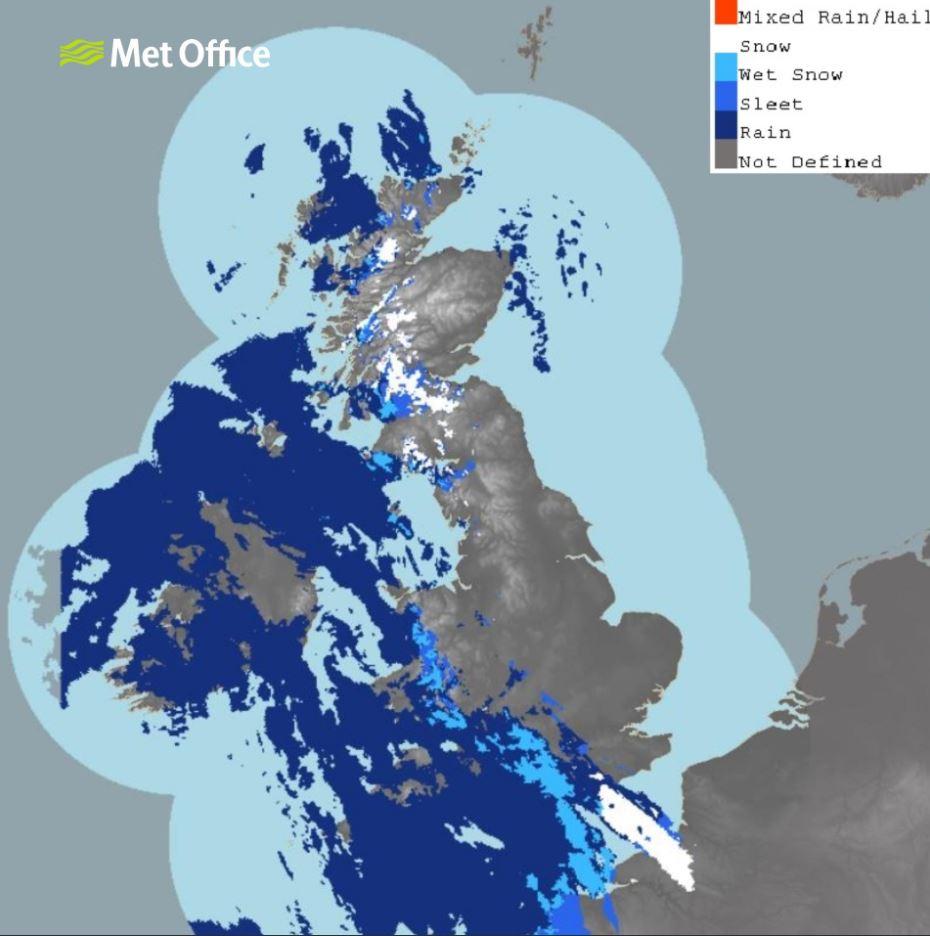 Superintendent Louise Blakelock, Deputy Head of Road Policing for Police Scotland, said: “Following warnings issued by the Met Office, there is a high risk of disruption to road journeys in all areas of mainland Scotland.

"Freezing rain is highly unusual and is expected to result in the rapid development of widespread ice, which will lead to dangerous travelling conditions.

"Congestion caused by all vehicles may restrict the emergency services, recovery vehicles, gritters and snowploughs from providing essential assistance or from clearing roads. Drivers of goods vehicles and buses should drive with extreme caution and be aware that you may be requested to park at a suitable position by the police. 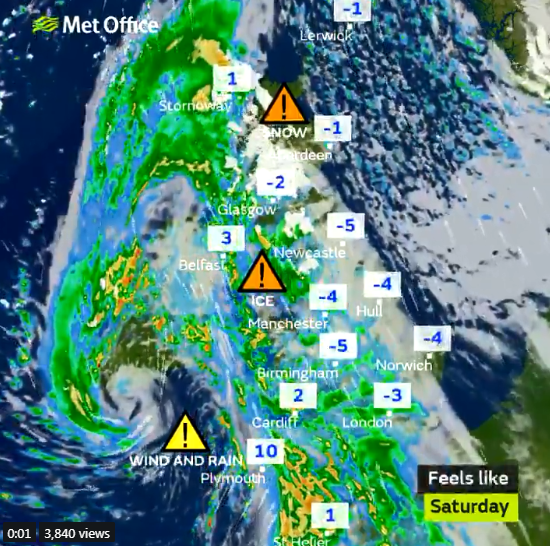 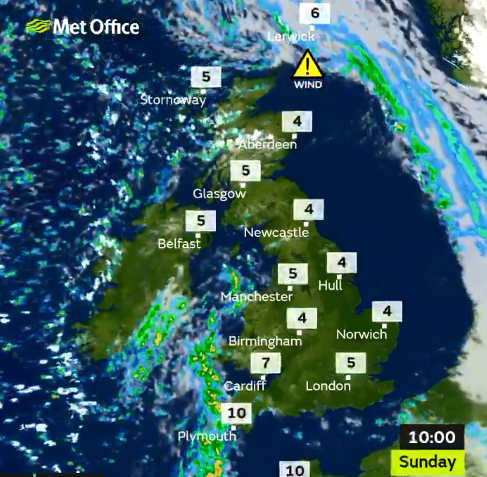 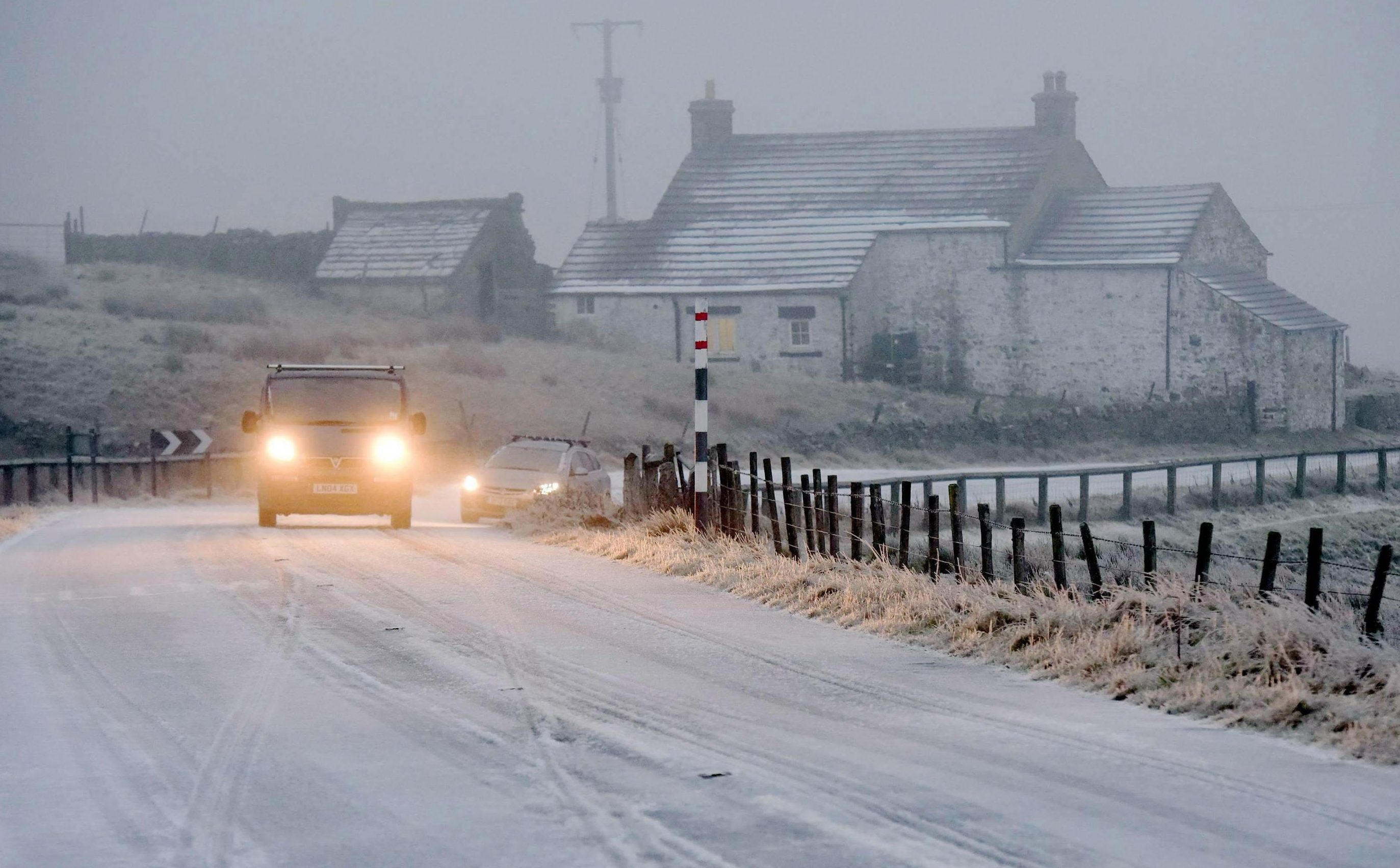 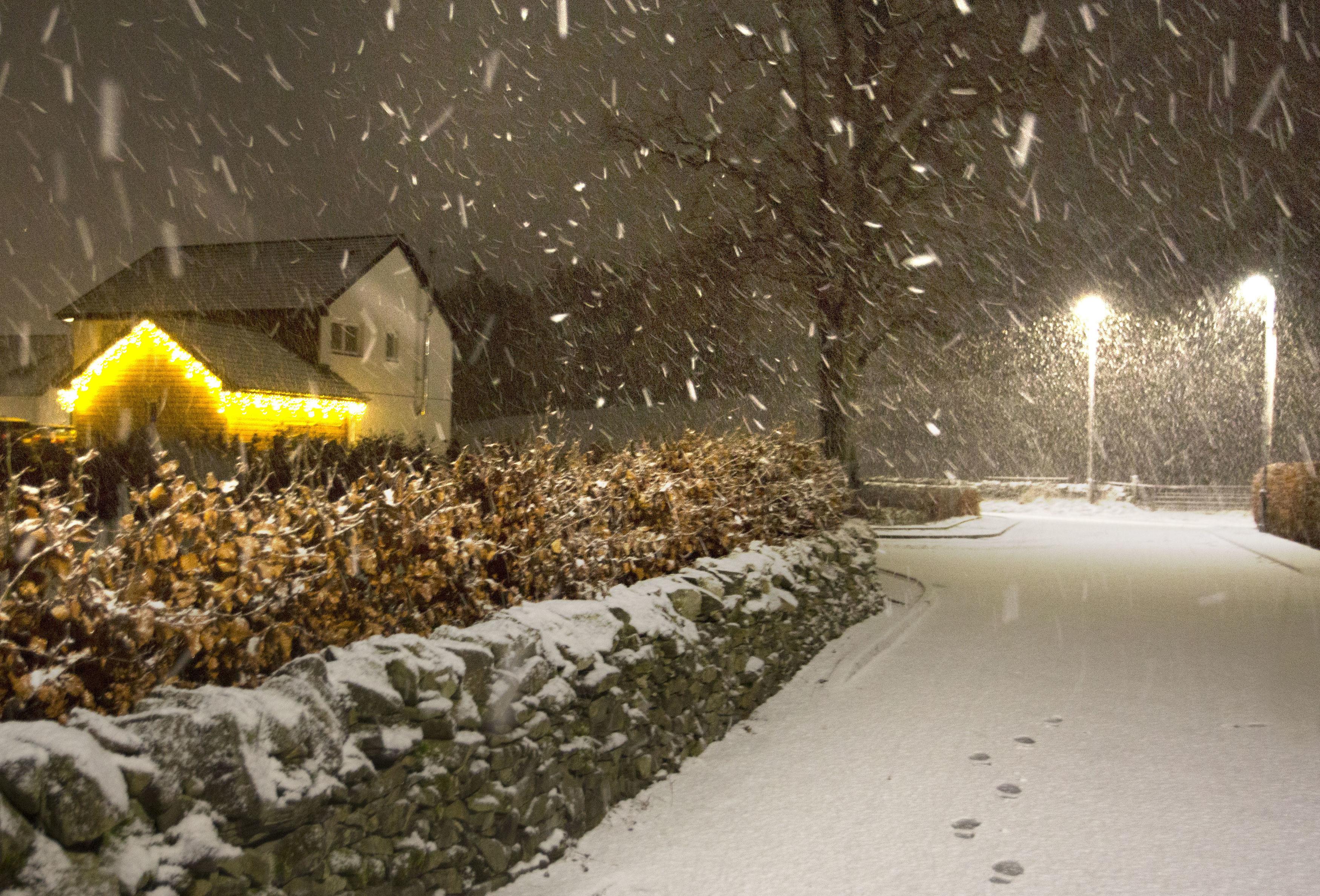 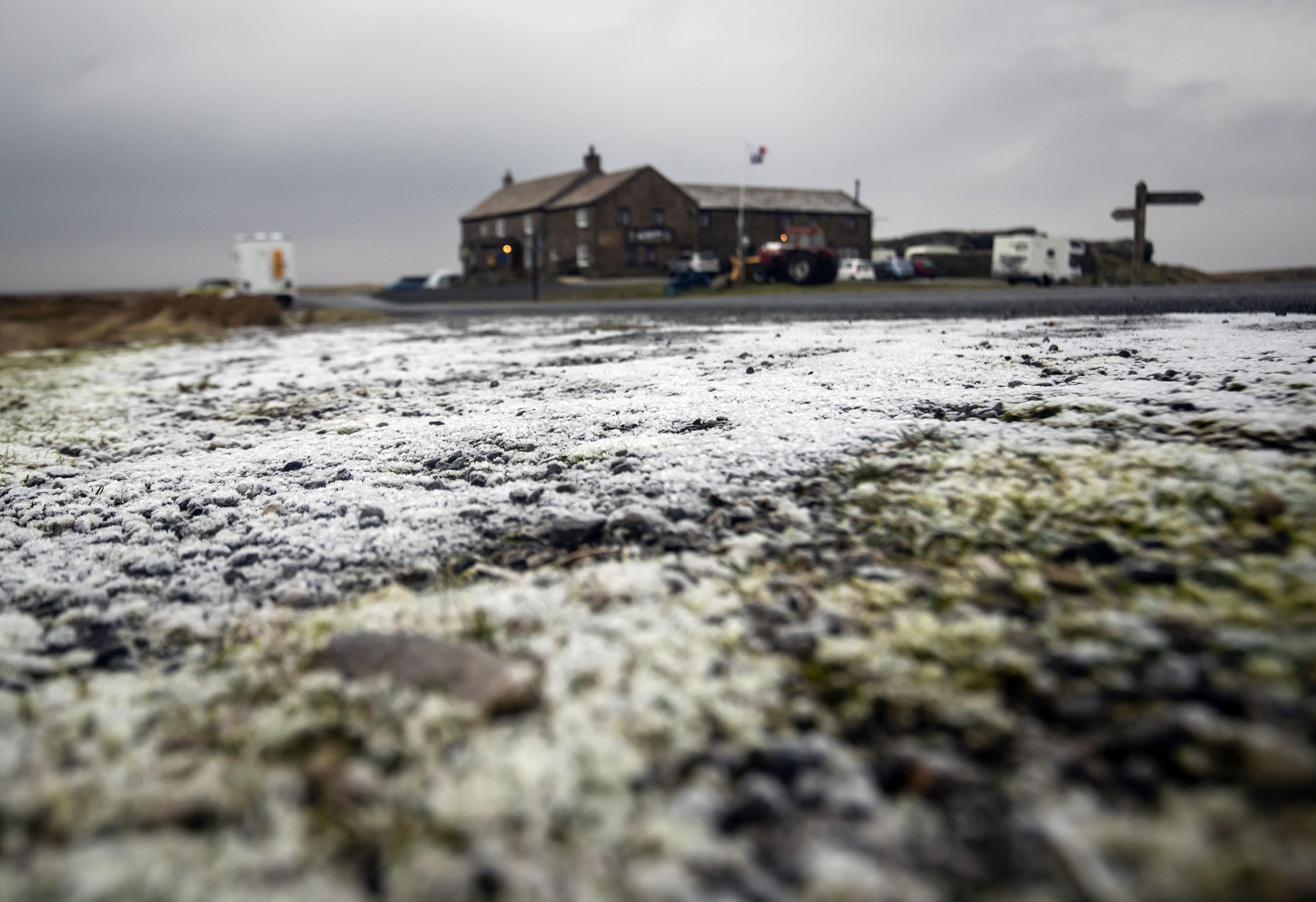 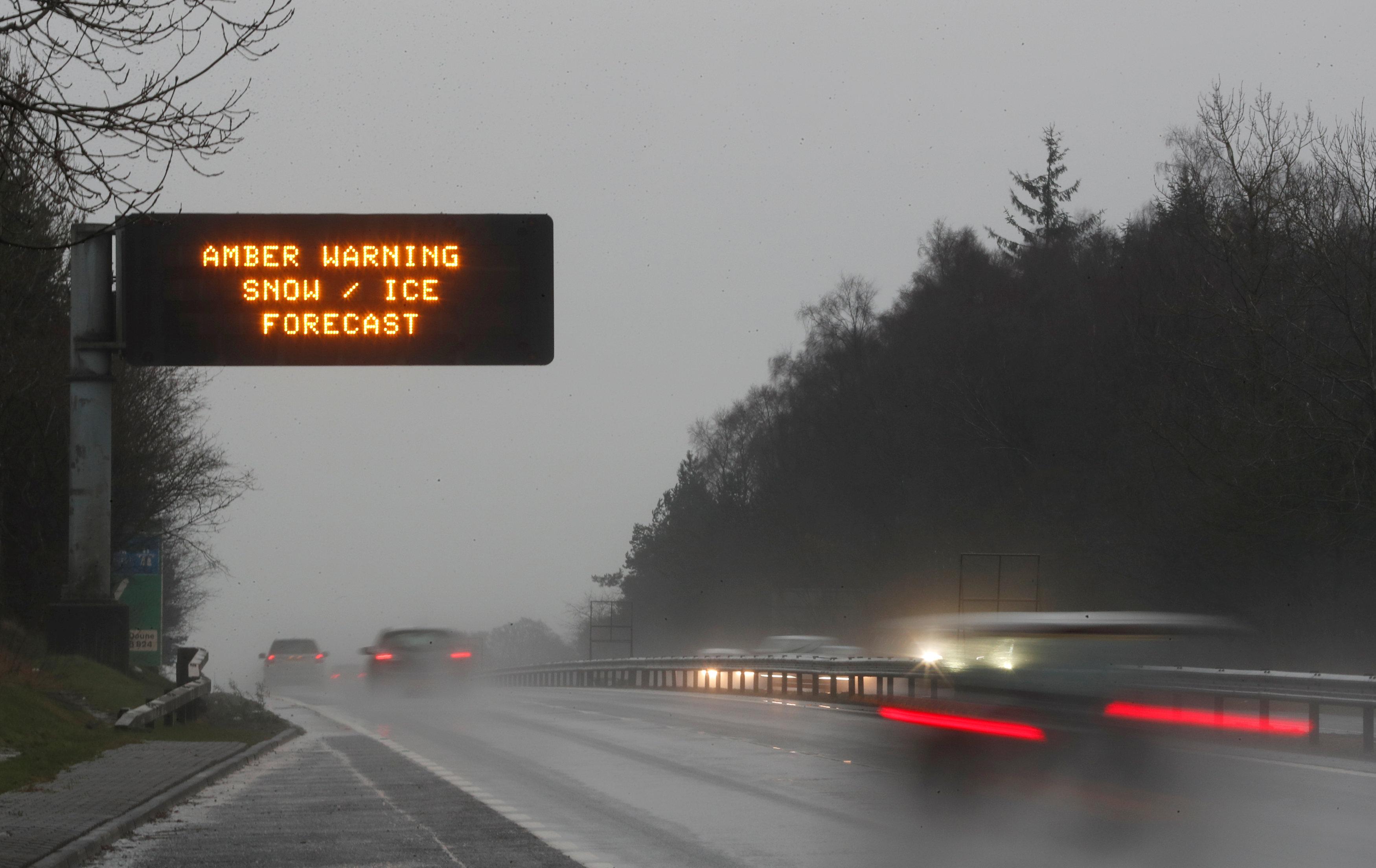 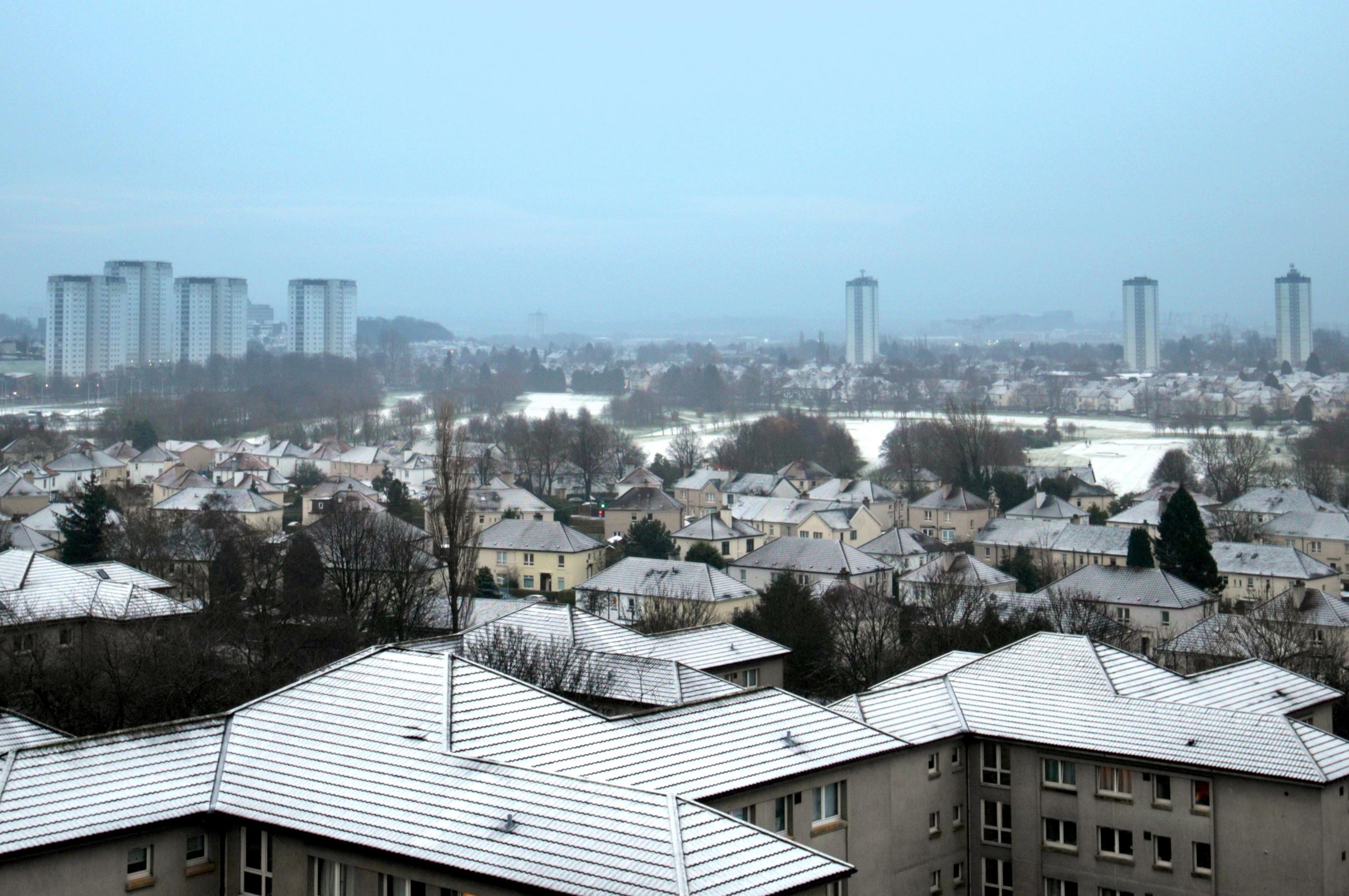 "If you are travelling on the roads you should ensure you and your vehicle are adequately prepared for the conditions, making sure you have sufficient fuel and supplies such as warm clothing, food and water in the event you are delayed for several hours. Charge your mobile phone and plan your route as well as alternative routes."

Ireland's meteorological service, Met Eireann, has also issued an orange warning for gusts of up to 80mph, naming an area of westwards-moving low pressure Storm Deirdre on Friday night.

Parts of England are in the grips of freezing temperatures, with max temperatures of 0.2C recorded in areas including Bingley in West Yorkshire and Pateley Bridge in Harrogate, North Yorkshire.

Temperatures in Cairngorm, about 1,245 metres above sea level in the eastern Highlands of Scotland, have also remained bitterly cold.

Records taken today shows temperatures of -6.4C, with gusts of 119mph – making it feel like -23C. 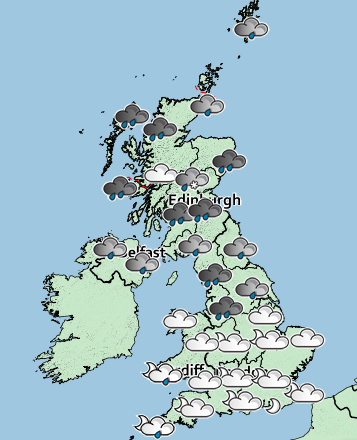 The bitterly cold weekend comes as sub-zero winds from Russia collide with a severe weather front heading east from the Atlantic.

Freezing rain has hit the central belt of the country, causing treacherous conditions on roads like the M62, the M6 and the M74.

Amber weather warnings indicate a potential risk to life and property, and signal conditions that could cause travel delays, road and rail closures and interruption to power supplies.

The Met Office said the heaviest snow was expected in Scotland and northern England, with 1,500 gritters being deployed.

But forecasters have warned of flurries in the South too.

Met Office meteorologist Alex Burkill said: "The band of rain, sleet and snow is crossing the UK and it is bringing significant amounts of snow in parts of Scotland and northern England."

He added patches of frost and fog would also continue to plague the UK. 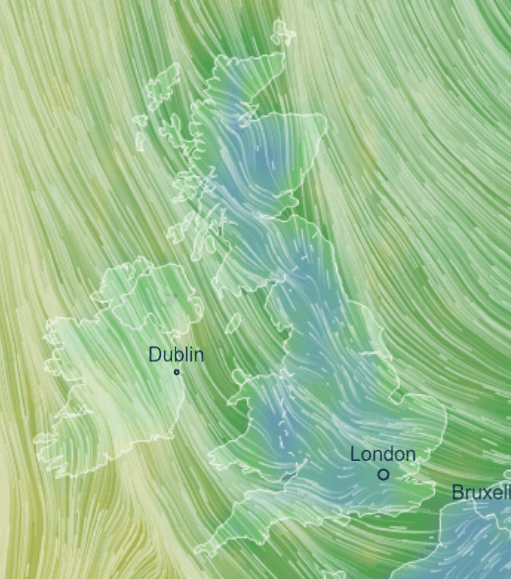 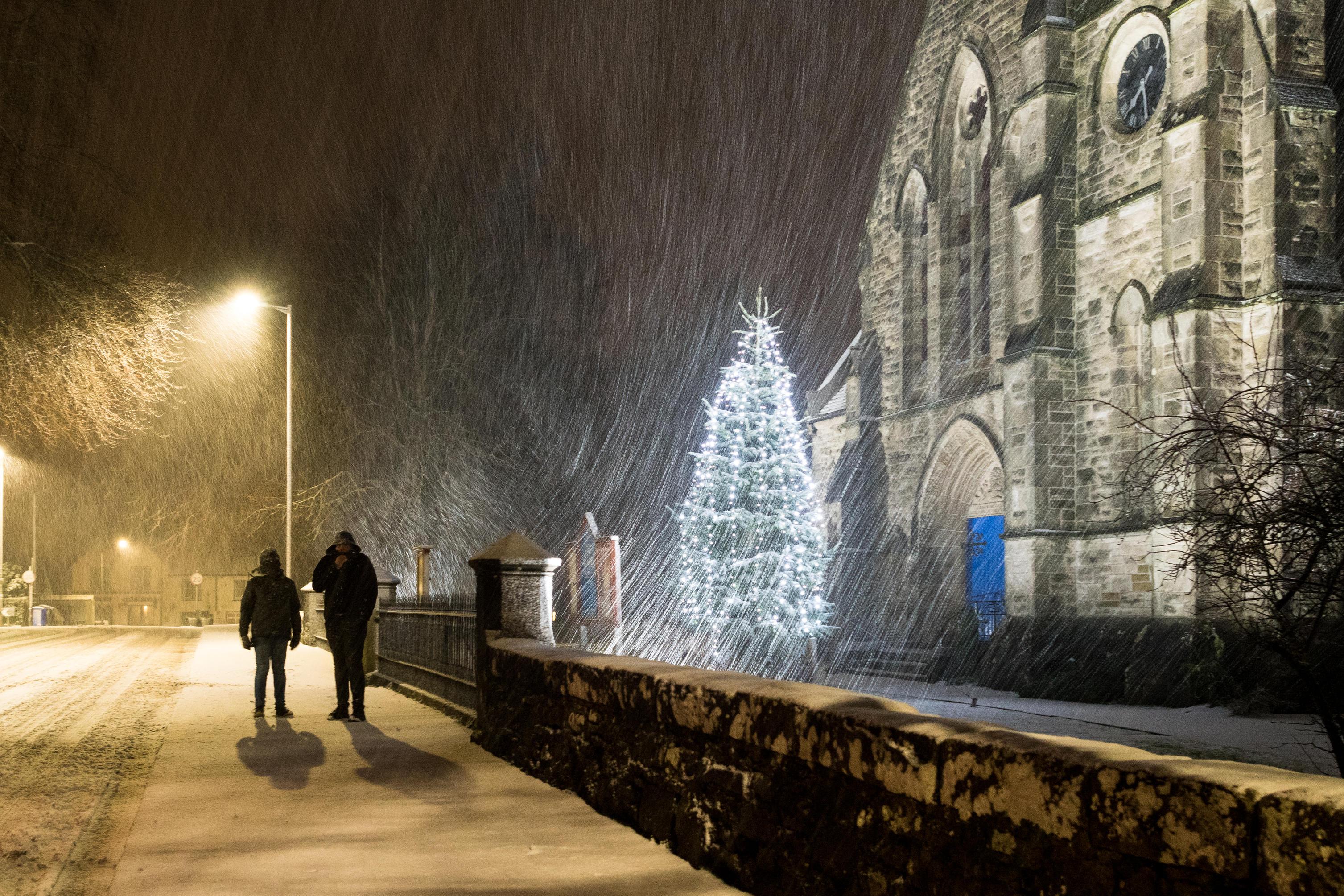 He explained: "As the worst of the wet weather – the freezing rain and snow – clears through this evening, the clearer sky will come in and it will probably be similarly cold in areas, about -3 and -4C."

The black ice may form, while danger to life warnings have been issued due to possible slips and falls on icy surfaces.

Power and mobile phone coverage is also expected to be cut.

A RARE PHENOMENON: WHAT IS FREEZING RAIN?

Freezing rain is a type of liquid precipitation that falls as a supercooled water droplet until it strikes a cold surface, at which point it freezes almost instantly.

It tends to start its life as snow, ice, sleet or hail, but passes through a layer of air that’s above 0 °C on the way down to the ground, melting into a liquid water droplet.

If these droplets then fall through a zone of sub-zero air just above the ground, they become supercooled.

When these supercooled droplets strike surfaces that are close to or below freezing, they freeze on impact forming a glaze of ice.

It’s common across parts of the USA, for example, for weather systems to produce a lot of freezing rain.

These are called ice storms, and if enough glaze collects on trees or power lines, the weight of the ice can cause them to break and collapse resulting in disruption on a large scale.

The glaze is also slippery, which makes driving and walking almost impossible.

The conditions needed for freezing rain to occur are quite specific and we don’t see them very often, making this phenomenon quite rare in the UK. 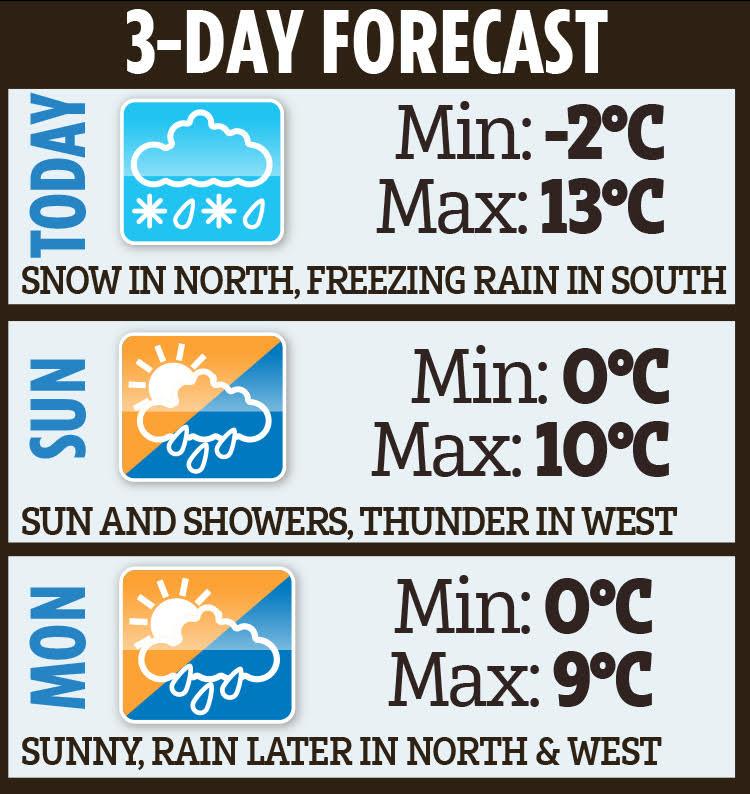 Heavy snow and blizzards have been also been forecast for today and tomorrow.

The RAC is expecting breakdowns to soar above 7,000 per day while Network Rail has confirmed plans to use 34 de-icing trains in order to minimise disruption.

The cold snap will ease off by Monday although bookies have slashed the odds of a White Christmas to 2/7.

Backpackers in Bondi trapped in Australia because of coronavirus