Huge amounts of energy locked into the atmosphere after the recent heat will erupt into violent storms and relentless, heavy downpours from tomorrow. A barrage of low-pressure systems hurtling across the Atlantic will smash the UK this weekend putting swathes of the nation on alert for damaging winds and flooding. Temperatures are also about to plummet from the record highs which brought the warmest Easter bank holiday ever across the UK.

Polar winds will sweep in from the north pushing the mercury close to freezing overnight bringing a risk of snow over high ground in Scotland and northern England.

The UK can expect no let up in the furious weather through the weekend and into next week as experts warn to brace for a ‘shock to the system’.

Met Office meteorologist Mark Wilson said: “There will be a massive change in the weather this week as we see a breakdown from the south with heavy showers spreading northwards through Wednesday.

“We are expecting thunderstorms to develop with the risk of significant rainfall, hail and gusty winds and the potential for quite a lot of rainfall in parts. 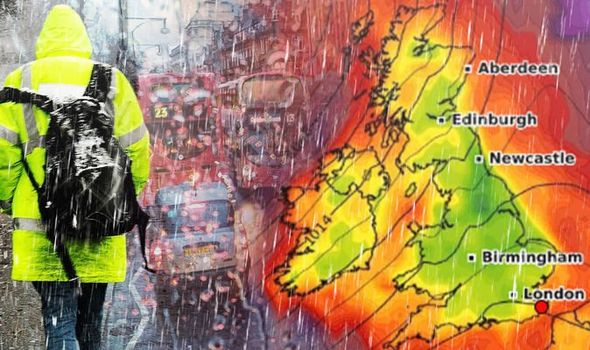 “The atmosphere has become very unstable after the recent warm weather and this is enough to spark heavy showers and thunder.”

Temperatures through the coming days will drop around 10C compared to the weekend with chilly winds and rain making it feel even colder, he warned.

Atlantic storms will roll in towards the end of the week amid warnings Britons can expect no end to the foul weather before the end of April.

Mr Wilson said: “Temperatures will be down a good 10C compared to the weekend, overnight we could dip into low single figures across the north where there will be a risk of snow over high ground. 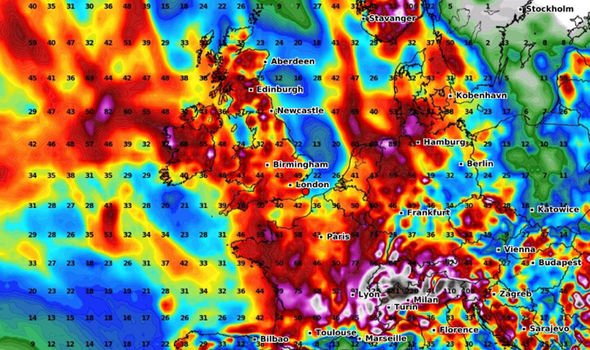 “We are changing back to a Polar maritime airflow so it is going to feel cooler over the next few days and through the weekend.

“Areas of low pressure from the Atlantic will work their way eastwards on Friday so there will be a risk of more unsettled weather at the weekend.

“There will be a risk of gales and further heavy rain, and although we expect maximum temperatures of around 13C (55.4F) or 14C (57.2F) it will feel cooler in the rain.

“Compared to the Easter weekend, this change in the weather is likely come as a shock to the system.

“The high-pressure calm will be replaced by low-pressure bringing very unsettled conditions, this is really the picture for the next week or so.”

Parts of Britain face up to 50mm (2 inches) of rain by the end of next week which falling on parched ground will bring a risk of flash floods, experts warn.

Powerful winds will drive the rain with weather models showing gusts of up to 100kmph hitting western regions this weekend. 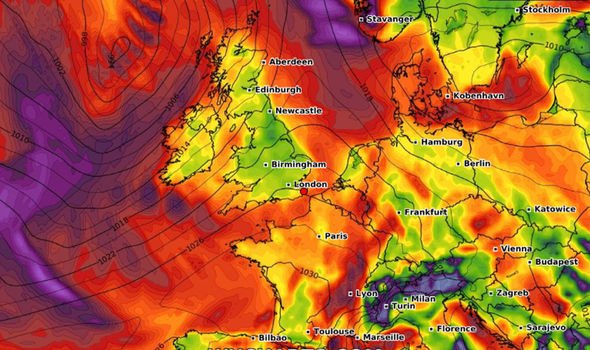 Charts also reveal a near-nationwide risk of thunderstorms while plunging temperatures in the north will bring wintry showers across the hilltops.

After a scorching bank-holiday weekend brought the hottest Easter Sunday temperatures ever recorded, thermometers are about to nosedive.

The hottest day of the year so far fell on Saturday when the mercury hit a sizzling 25.5C () at Gosport, Hampshire.

Temperatures over the coming days will fall to around average for the time of year with further cooler weather forecast next week.

A forecasting spokesman for the Weather Company said: “It is going to be an unsettled week ahead with low-pressure cells bringing frequent and often widespread showers or longer spells of rain.

“Some of these showers will be heavier at times with the risk of thunder.

“A cooler trend is expected through the week with temperatures lowering to around normal for the time of the year. 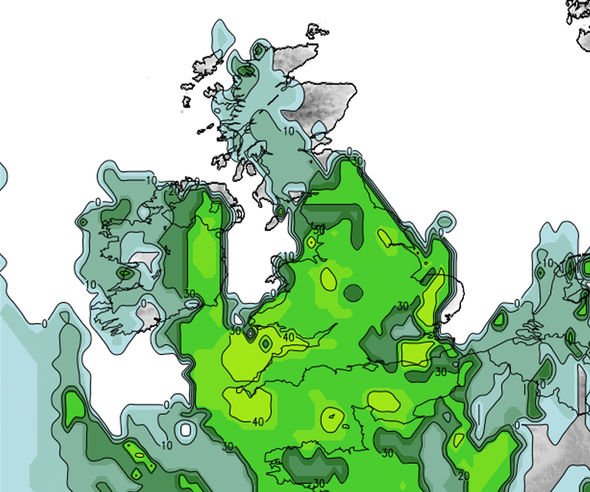 “Next week low pressure will remain in charge with continuation of cooler and wetter weather but there will be some drier and brighter interludes at times.”

Weathertrending meteorologist John Hammond agreed ‘a dramatic change is on the way’ this week.

He said: “The real change comes on Tuesday night into Wednesday, we are going to see a marked increase in humidity, a lot more cloud and some thunder storms breaking out, some of these will could potentially be quite severe.

“Although they will be hit and miss as thunder storms often are, most of us can expect to see some potential downpours by the middle of the week with some flash flooding potentially.

“The rest of the week will be much cooler and there will be the potential for some very wet and windy weather as we head towards next weekend.

“I think this weather, come the middle of the week, will be fairly high-profile, watch out for some warnings.

Wet, windy and stormy weather could hold out through the rest of April and into next month, according to the Met Office’s long-range outlook.

It states: “For the end of April and start of May, changeable weather is likely to dominate, with a chance of showers or longer spells of rain and some periods of stronger winds, especially in the west and southwest.

“These will be interspersed with drier but probably short-lived sunny spells.

“Temperatures will most likely be near normal in the west, and slightly warmer than the seasonal average in the south and southeast.

“There is a chance of a shift towards drier warmer weather by the bank holiday weekend but this is far from certain.”