Six inches of the white stuff could fall as forecasters warn a storm – which would be dubbed Hannah – is possibly building off the coast – days after Storm Gareth swept across the country. 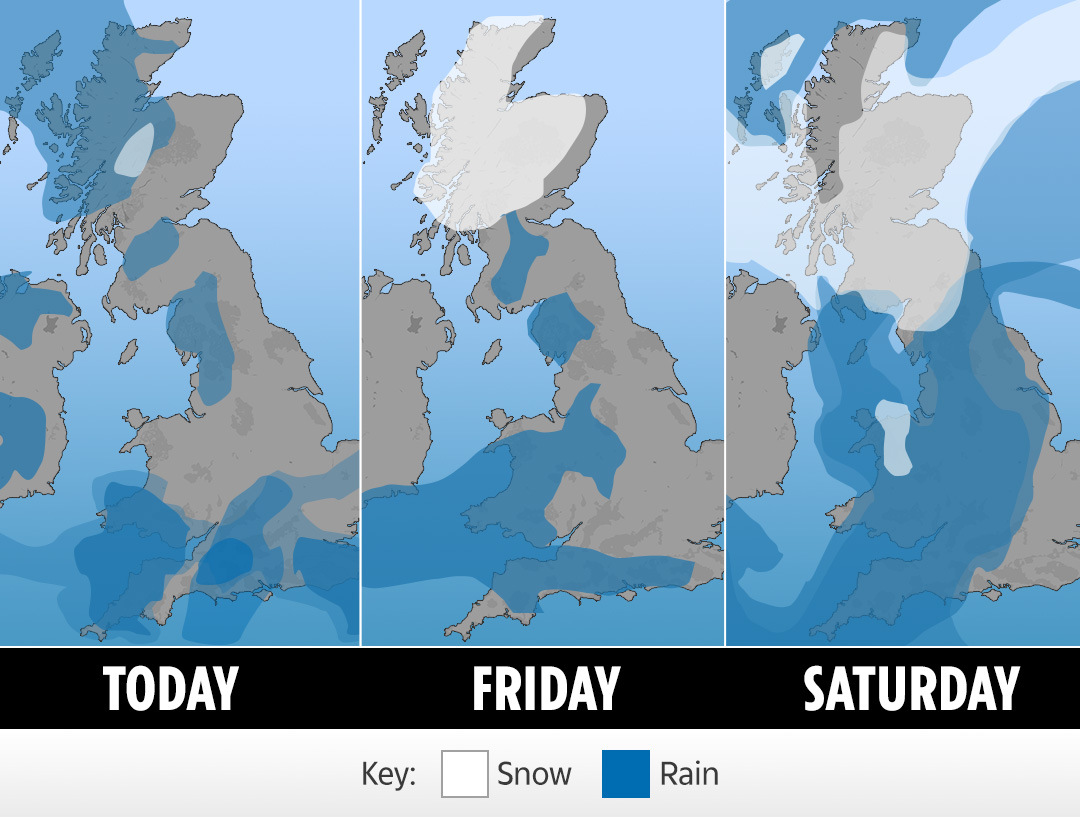 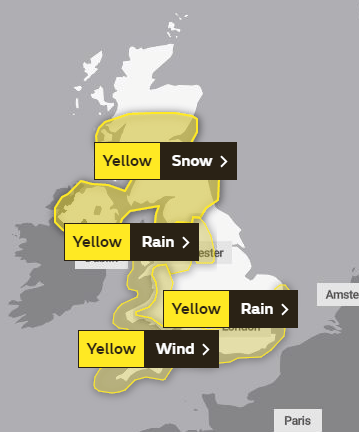 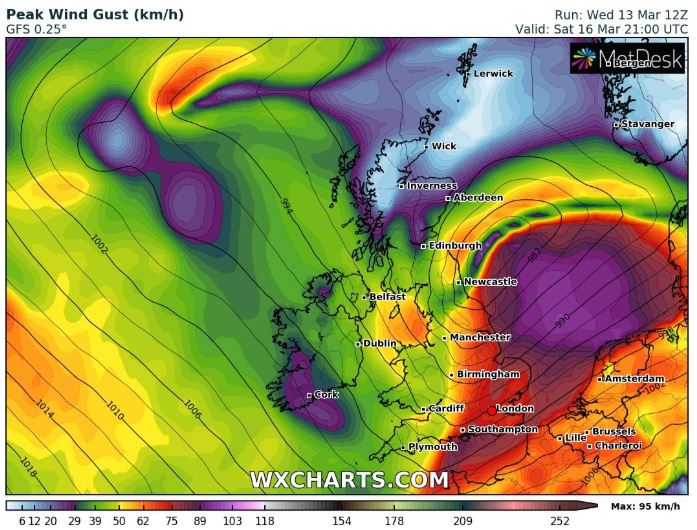 Yellow warnings for snow, rain and wind have been issued – with the warning for a blanket of snow in place from 4am to 9pm on Saturday.

Days after Storm Gareth wreaked havoc across the country with 99mph winds, forecasters have predicted a heavy dumping of snow stretching over the whole of Northern Ireland, Manchester and the north of England and southern Scotland.

Up to 20cms could fall and cause travel chaos, as Brits brace against heavy rain and high winds – which could reach speeds of 70mph on the coast.

A Met Office spokeswoman told the Sun Online: "Saturday will be wet and windy with snow in some parts of the country, and Sunday will be brighter with showers across the country.

"There is a developing area of low pressure that is going to push northwards through the UK through Saturday.

"It will be quite wet with rain across the country.

"As the band of rain pushes north across the country, it's going to turn to snow.

"At the moment it could be a named weather system, it's not out of the question."

The forecaster urged Brits to keep an eye on the warnings, suggesting a storm could be named if one is scaled up to an amber warning.

Eleanor Bell, meteorologist with The Weather Company, told The Sun Online: "It'll be very unsettled through the week and into the weekend, with deep or active areas of low pressure bringing repeated wet and windy conditions.

"Repeated persistent and often heavy rain will bring a threat of flooding, particularly to the West, and snow for the Scottish Highlands."

Today saw a wind weather warning in place until 1pm, across most of central and southern England.

Tomorrow a section of England from Nottingham to Newcastle will again see strong and gusty winds from 5am until 3pm despite sunny spells for many areas – however skies will be cloudier in parts of Wales and southern England with outbreaks of rain.

How are UK storm names chosen?

So Aileen is first followed by Brian, then Caroline, then Dylan and so on.

Dozens of trains were cancelled or re-routed and thousands of commuters faced delays after a Storm Gareth "avalanche" of earth, rock and even trees blocked the London to Hastings railway line this afternoon.

As more stormy weather lashed many parts of Britain today, Network Rail said engineers were clearing the landslide of several tons from the track.

And drivers have been warned to plan for “significant” travel delays on Saturday, when heavy snow showers are expected to bombard the country.

Motorists could become stranded in deep drifts, especially on higher ground where up to eight inches (20cm) of the white stuff is predicted.

Air passengers have also been alerted to the prospect of flight delays and cancellations at Scotland’s airports due to blocked runways.

Gareth was the largest named storm to affect Britain since Storm Doris on February 23, 2017, Met Office maps of past short storms showed.

Gareth underwent ‘explosive cyclogenesis’ – becoming what is known as a ‘weather bomb’ – as its air pressure plunged by over 24 milibars in 24 hours. 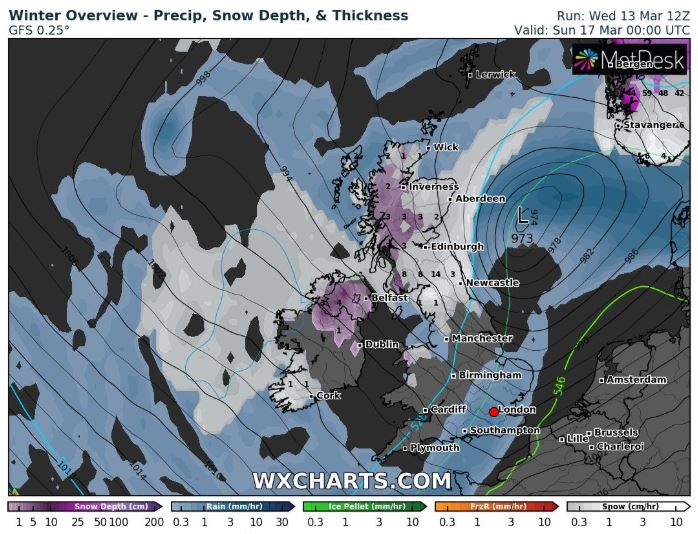 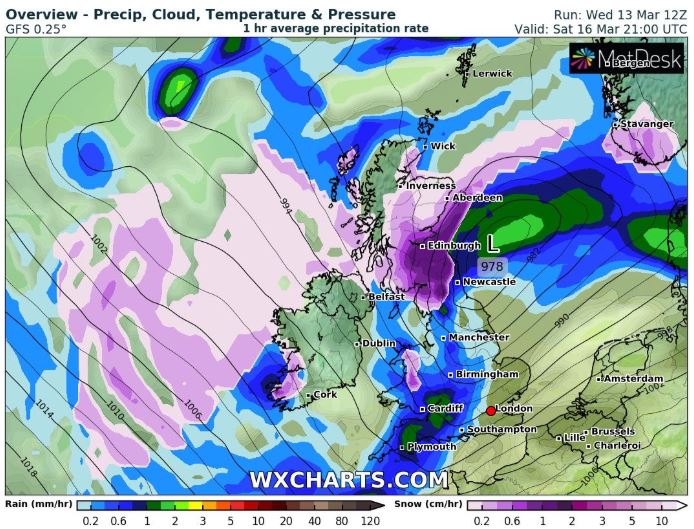 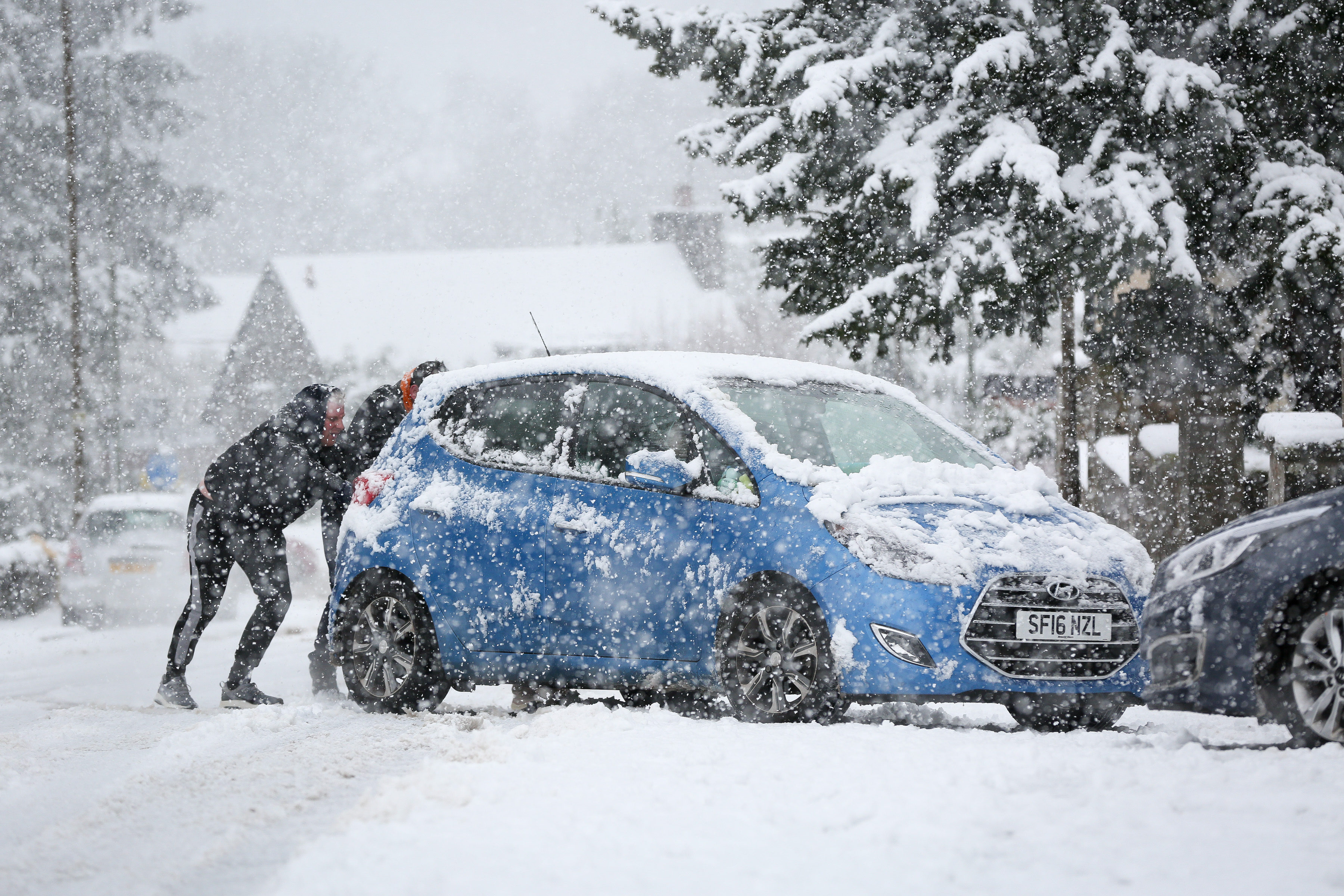 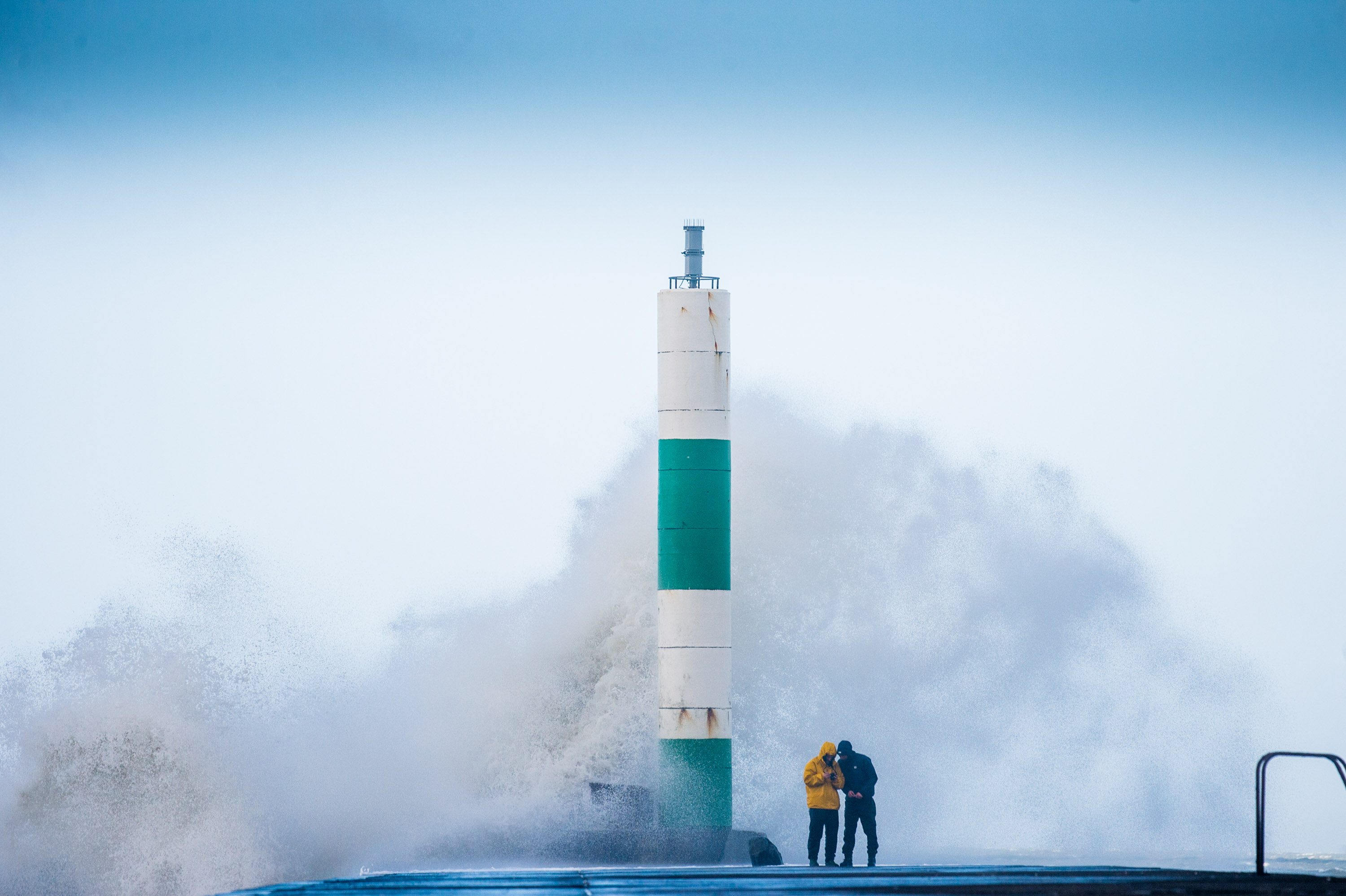 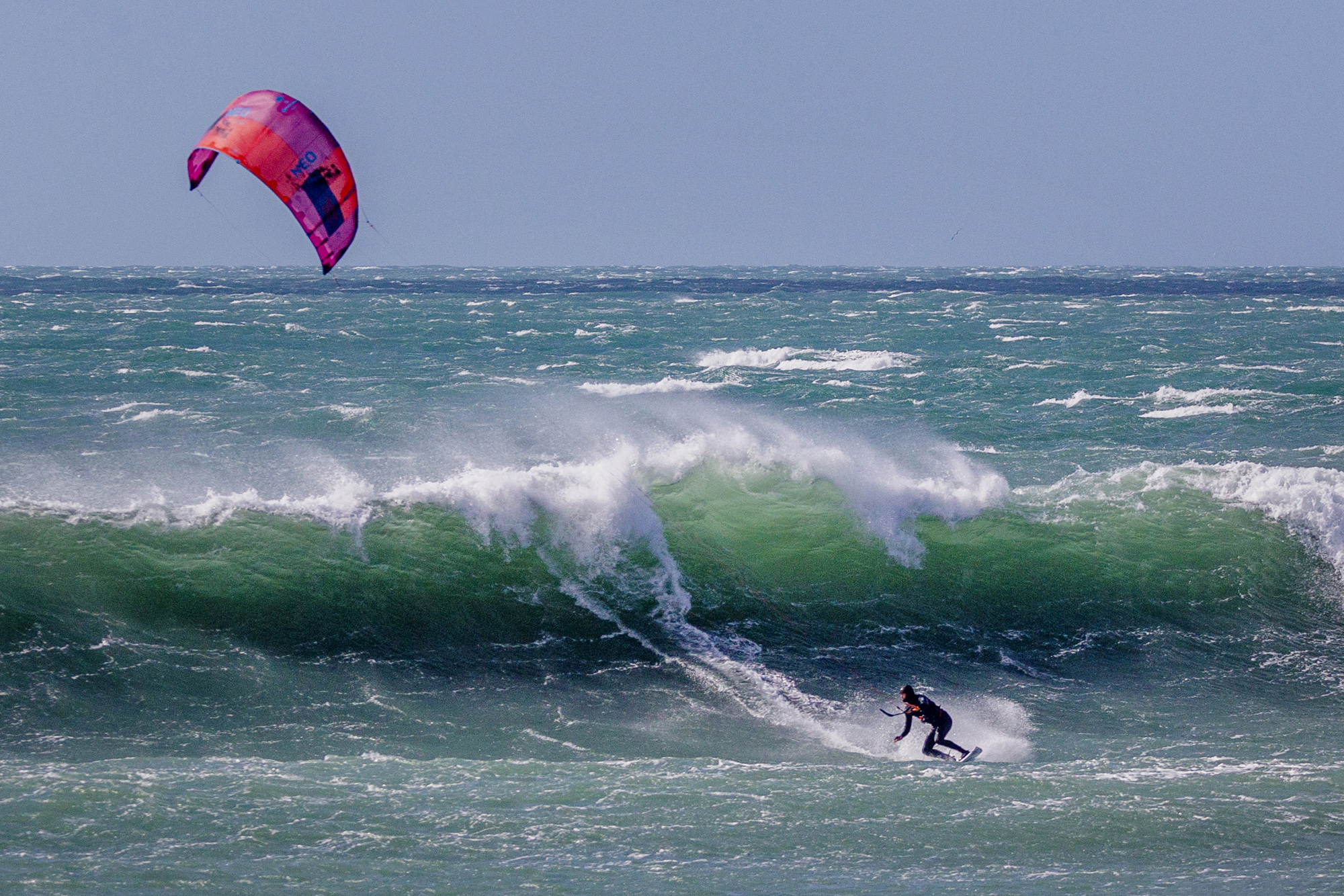 -, forecast, met, offi, UK, Weather
You may also like: