The Met Office yesterday issued a yellow weather warning for fog lasting from Thursday evening through to midday on Friday. The fog is predicted to blanket Britain and led to temperatures dropping to -5C overnight as forecasters continue to predict December will be the coldest on record.

The Met Office forecast for Friday concerns the lingering fog patches and chilly conditions during the day.

The forecast reads: “Early fog and low cloud slow to clear from some areas and lingering all day over parts of Wales and central and eastern England.

“Rain at times for parts of northern and central Scotland. Otherwise mostly dry. 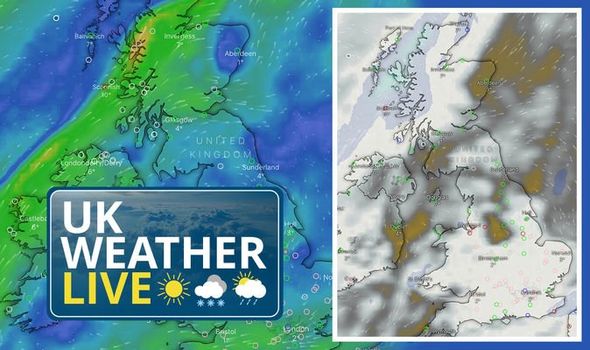 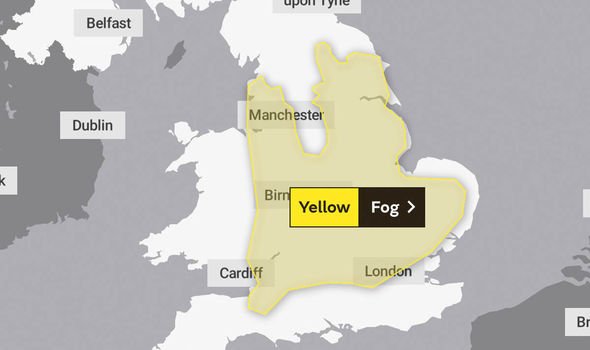 8.46am update: Met Office weather forecast for fog remains in force until midday

The Met Office yesterday issued a severe weather warning for fog from 8pm on Thursday to midday on Friday.

The warning reads: “Fog and freezing fog patches are expected to develop quite widely on Thursday night, with some of these becoming dense in places with very poor visibility.

“This is most likely to affect parts of central England and east Wales, but other areas are also at risk.

“Fog is likely to be slow to clear during Friday and may last through the day in some places which may lead to some travel disruption.” 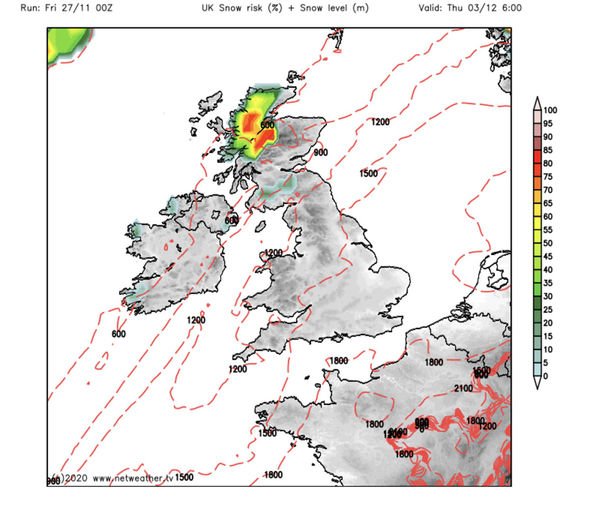 8.13am update: The BBC weather forecast for Friday

The BBC weather forecast for Friday reads: “This morning there will be fog lingering across areas, some dense patches which will eventually lift.

“Best of the sunshine will be in West Wales.

“This evening will be fairly chilly across areas, mostly cloudy with some scattered light showers across the country.

“Clear spells over North England and South Scotland, where mist or fog patches may form.”

7.26am update: Britain is forecast for bone-chilling temperatures next week with up to 3.1 inches of snowfall anticipated

The latest weather forecasts reveal the mercury could drop to as low as -8C next week.

The Netweather charts show snow is expected from December 3, lasting more than a week,

The weather map reveals a 100 percent risk of snow in parts of Scotland from 6am next Thursday.

Temperature charts show Scotland is set to reach lows of -5C on Friday at 9am, which coincides with further snowfall.

Police union demands all officers are immediately vaccinated for Covid

Who is Kaitlyn Saunders and what was her Black Lives Matter skate routine?