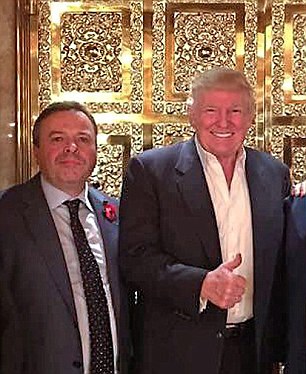 A dramatic attempt to ‘fix’ the next Tory leadership contest for Boris Johnson is to be launched by Arron Banks, the Ukip donor who campaigned for Brexit during the 2016 EU referendum.

Mr Banks is planning to use an advertising blitz to urge Brexiteers, including 90,000 Leave.eu supporters still on his email list, to join the Tory Party and vote for Mr Johnson in the next leadership election.

The move is similar to the Momentum campaign which flooded the Labour Party with Jeremy Corbyn supporters to secure his election.

But it is Mr Banks’s links to Donald Trump’s advisers which will most alarm No 10.

Mr Banks travelled with former Ukip leader Nigel Farage to meet Trump shortly after he won the US election.

Mr Banks, whose business interests and links to Russia have come under close scrutiny, has admitted handing the Russian ambassador to the UK a telephone number for Trump’s team.

He also has links to Steve Bannon, Trump’s former political strategist, who has been courting Mr Johnson to join a pan-European populist alliance against the EU.

He said that the campaign would utilise the 1.2 million people who follow the organisation on social media, and claimed that 7,500 supporters had already joined the Tories in order to vote for Mr Johnson.

He added that ‘a number of big Tory donors’ were looking to back the membership drive.

He said: ‘Mrs May has badly miscalculated. People admire authentic politicians like Boris, not grey robots.’