Jeremy Hunt accidentally referred to his Chinese wife as Japanese today in a bizarre gaffe on his debut as Foreign Secretary in Beijing.

Mr Hunt immediately corrected his ‘terrible’ error as he attempted to talk up his family’s links with China at the start of the crucial meeting.

The visit to China is the new Foreign Secretary’s first high profile outing since his sudden promotion earlier this month to replace Boris Johnson.

Mr Hunt has been married to Lucia since 2009 and the couple have three children. Mrs Hunt was born in Xi’an, the capital of China’s Shaanxi province. 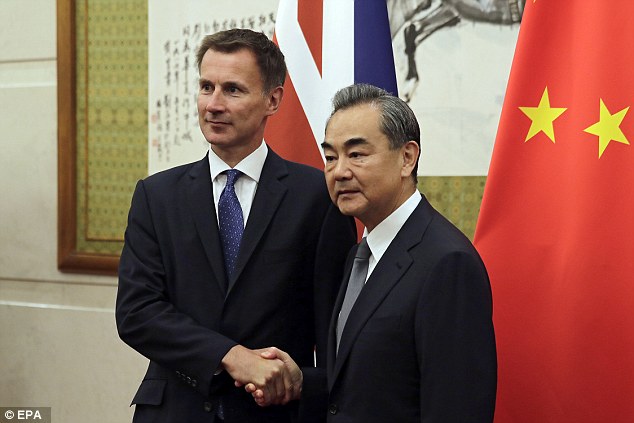 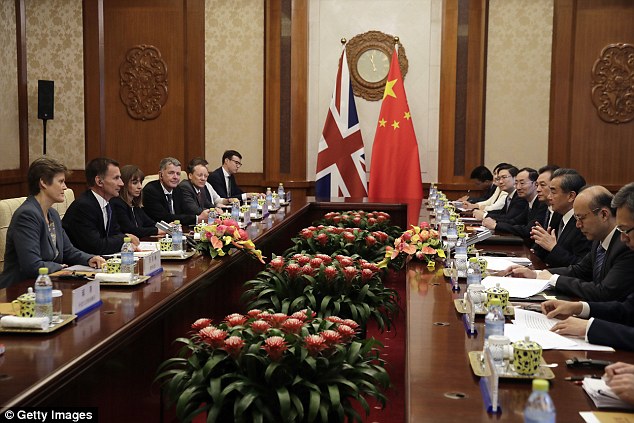 China and Japan have been traditional rivals for centuries. Although relations have improved somewhat recently, they remain touchy due to issues such as Japan’s bloody occupation of parts of China in the 1930s and 40s.

‘My wife is Chinese and my children are half-Chinese and so we have Chinese grandparents who live in Xian and strong family connections in China,’ he added, referring to the ancient city of Xian in northern China.

Mr Hunt took over from the gaffe-prone Mr Johnson – who once referred to Africans as ‘flag-waving piccaninnies’ with ‘watermelon smiles’ in a newspaper column – after his dramatic resignation over Prime Minister Theresa May’s Brexit blueprint.

Mr Hunt is in China in a bid to strengthen trade ties with Beijing ahead of Britain’s exit from the European Union next year. 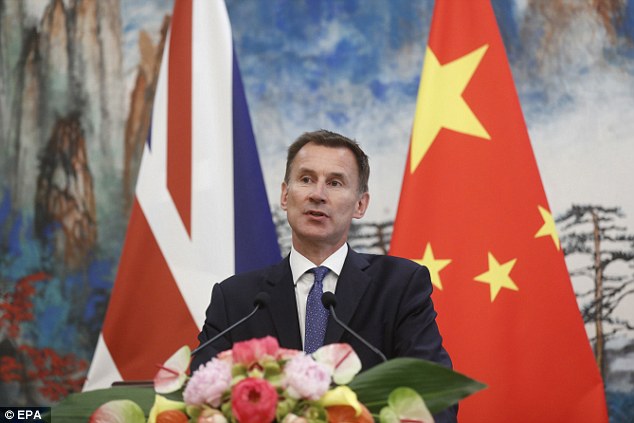 Other topics on the table are expected to be ‘the importance of multilateralism and free trade and ways the UK and China can work together on global challenges such as climate change, development, security and non-proliferation and enforcing UN sanctions on North Korea’, his office said ahead of the trip.

At a press conference later, Mr Hunt said: ‘We discussed the offer made by Foreign Minister Wang to open discussion of a possible free-trade deal done between Britain and China, post-Brexit.

‘We welcome this and said that we will explore it.’

He added: ‘We also raised consular cases, including that of the Simpson children. Foreign Minister Wang said he would look into that case while also still respecting the independence of China’s judicial system.’