Beirut: A United Nations security team was fired on in the Syrian town of Douma, raising doubts on Wednesday about when international investigators would be able to visit the site of what was suspected to have been a chemical attack.

Eleven days have passed since rescue and medical workers in Douma reported an attack that left victims choking and foaming at the mouth, killing at least 43 people. 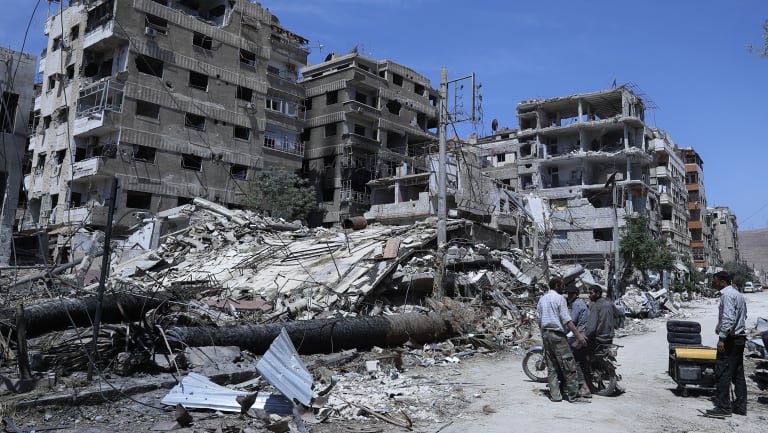 People stand in front of damaged buildings, in the town of Douma, the site of a suspected chemical weapons attack, near Damascus, Syria.

Blaming the government of President Bashar Assad for the attack, the United States, Britain and France launched coordinated strikes on Syrian military facilities on Saturday, describing them as punishment for what they called Assad's use of chemical weapons.

The Syrian government and its Russian and Iranian allies have denied that any chemical weapons were used and blamed rescue workers and rebels for what they called concocted videos said to show the suffering of victims as a way of demonising the Syrian government.

But the lack of access to the site has left lingering questions about whether chemical weapons were used and if so, what type or types.

A team from the Organisation for the Prohibition of Chemical Weapons arrived in the Syrian capital, Damascus, on Saturday, with a mandate to investigate the attack. But the team has not yet been able to reach the site.

This has led to accusations by the United States that the Syrian government and Russia are trying to cover up any evidence of chemical weapon use — a charge they deny. 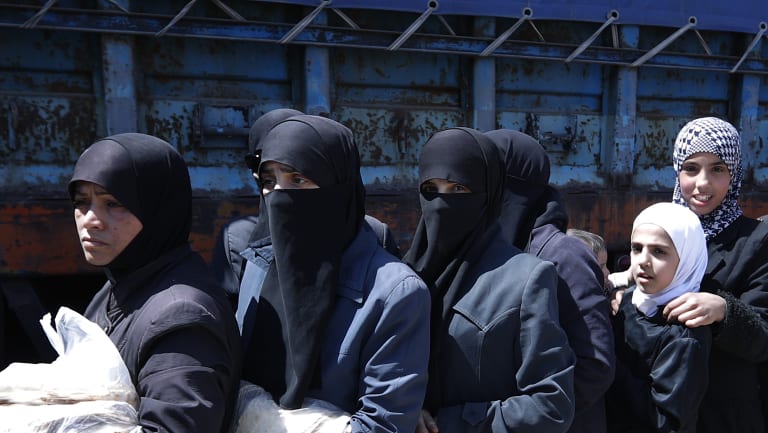 Journalists were free to roam: Syrian women wait for Syrian authorities distributing bread, vegetables and pasta in Douma, the site of a suspected chemical weapons attack, near Damascus, Syria.

The investigators were originally scheduled to visit the site on Monday but did not. On Tuesday, the Syrian government said the team had not been able to go for security reasons, although it had allowed a number of journalists to visit Douma. Some of those journalists visited the site of the attack and interviewed residents who lost members of their families.

The residents differed on who was responsible for the attack, with some accusing the government and others accusing the rebel group that had been in control of Douma at the time, the Army of Islam.

But the fact that journalists had been able to wander around Douma unmolested raised questions about why it was not deemed safe enough for the investigators to visit.

On Wednesday, Ahmed Uzumcu, the director general of the Organisation for the Prohibition of Chemical Weapons, told a meeting of the group's executive council that a security team from the United Nations had gone to do reconnaissance in Douma on Tuesday.

During a visit to one site, a large crowd gathered and the security team left, Uzumcu said. At another, the team "came under small-arms fire and an explosive was detonated," he said.

The team left and returned to Damascus unharmed, but it was not clear when the investigators would be able to visit Douma, Uzumcu said.

The longer the investigators must wait to take samples in Douma, the lower the likelihood of obtaining evidence of chemical weapons use, because the toxins in the weapons degrade over time.

But under its mandate, the Organisation for the Prohibition of Chemical Weapons is only responsible for determining whether chemical weapons were used and what kind, not who used them.

A review by The New York Times of videos of the aftermath and interviews with residents of Douma, medics and rescue workers suggested that metal canisters containing a chemical were dropped from Syrian government helicopters during a wider offensive to rout the rebels.

One of the canisters landed on the upper floor of an apartment building packed with people, many of whom suffocated as the canister's contents dispersed.