The European Union's 28 leaders came to Bulgaria this week to deepen ties with partners in the east. They left preparing defences against allies in the west.

First thing on Friday morning, the European Commission, the EU's executive arm, will begin putting a so-called blocking statute in place to shield European companies doing business with Iran from US sanctions. It's the first time in more than two decades that the measure is being invoked. 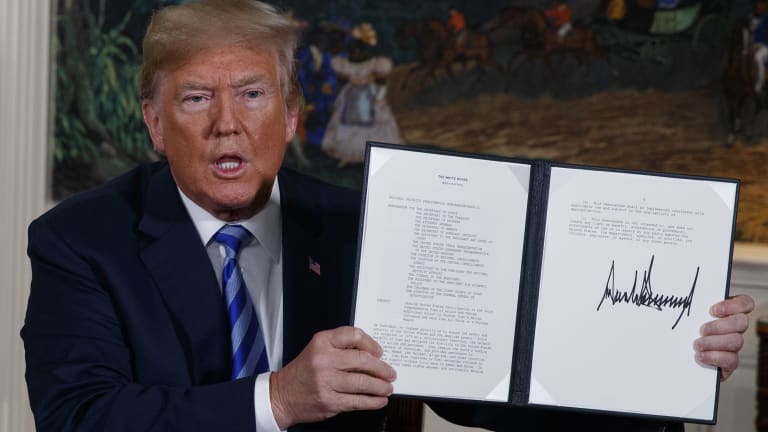 President Donald Trump shows a signed memorandum to pull out of the Iran nuclear deal.

The last time the EU threatened to use the blocking statute was in 1996, when Bill Clinton's administration stood down and agreed to waive sanctions aimed at curbing foreign investment in Cuba, Iran and Libya.

The proposed EU actions are no guarantee that the accord can be salvaged, however, with the US Treasury Department saying companies with existing contracts will have 90 to 180 days to extract themselves from their Iran dealings before becoming subject to penalties.

German Chancellor Angela Merkel, who will meet with Russian President Vladimir Putin on Friday, warned that it wouldn't be possible to shield entire industries from US measures and said that she didn't want to "encourage any illusions". Juncker reiterated the stakes of standing up to the Americans, saying "we have to understand that the effects of the US sanctions will be felt".

The commission's proposals on how to save the Iran accord were unanimously accepted by the EU leaders and included: keeping Iran's oil and gas industry viable; allowing the European Investment Bank to facilitate investments in Iran; the creation of special purpose vehicles to allow for transactions between the regions; and protecting European companies that do business in the Middle Eastern nation.

French President Emmanuel Macron said that neither France nor the EU had any intention of imposing sanctions or counter-sanctions on US companies over Iran, since his defense of the nuclear accord was based on concerns about security and stability, not commerce.

Neither will the French President force companies to stay in Iran at the risk of attracting US sanctions, Macron said, adding that "the President of the Republic is not the director general of Total," the only western energy major with investments in Iran.

While Europe looks for the right balance of tools to deploy against its US ally, if any at all, the political will to defy Trump united the normally fractious bloc. EU President Donald Tusk set the tone for the summit on Wednesday when he asked rhetorically before a dinner with the leaders: "With friends like that, who needs enemies?"

"The real geopolitical problem is not when you have an unpredictable opponent or enemy or partner, the problem is if your closest friend is unpredictable," Tusk said at the close on Thursday. "This is the essence of our problem today with our friends on the other side of the Atlantic."

against, combat, EU, invokes, measures, sanctions, to, Trump, United
You may also like: