The Trump administration's attempts to convince south-east Asian nations to push back against China's rising power are not working and Secretary of State Mike Pompeo's visit to Jakarta is unlikely to change that.

That's the view of a leading analyst who says Indonesia has been very clear it does not want to have to choose sides in the contest between China and the United States.

In Jakarta, Pompeo will meet with counterpart Retno Marsudi and address Ansor, the youth wing of the Nahdlatul Ulama, a Muslim organisation that claims up to 90 million members. 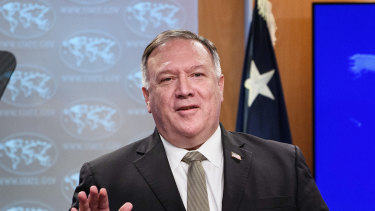 US Secretary of State Mike Pompeo.Credit:AP

Ahead of the visit, Pompeo said the US believed it was in south-east Asian countries' best interests "to ensure that their sovereignty is protected against the continued efforts to encroach upon their basic rights – their maritime rights, their sovereign rights, their ability to conduct business in the way that they want to inside their country – that the Chinese Communist Party continues to threaten".

Pompeo's five-day trip will take him to India, Sri Lanka, the Maldives and Indonesia and end just days before the US presidential election.

Aaron Connelly, an American research fellow based at Singapore's International Institute for Strategic Studies, saidPompeo had been very focused on competition with China and this approach had not been well received in the region.

"You could not identify any country in south-east Asia that is willing to sign up to the Trump administration's approach to China." 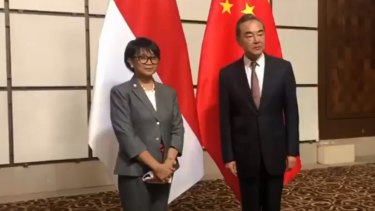 "One reason is south-east Asia sees the US as trying to delegitimise China's power … but they look at US strategy and don’t know what the end game is.

"The second reason is that south-east Asia regards US demands for democracy and human rights as more invasive than Chinese demands, with the exception of the Philippines and Vietnam, for whom the South China Sea is a domestic political issue.

"The third reason is the economy and business. Look at the money the US is bringing to Indonesia this past week," he said referring to the signing of a memorandum of understanding worth $US750 million ($1 billion).

China is one of Indonesia's key trading partner and along with Japan, one of the major sources of direct investment in the country. Indonesia is banking on three Chinese vaccines to help it curb the rampant spread of the virus.

Foreign Minister Retno Marsudi last month said "we don’t want to get trapped by this rivalry".

Dino Patti Djalal, a former deputy Indonesian foreign minister and ambassador to the US, recently wrote scathingly that the US had taken China-bashing to a new level, but this had not found a receptive audience in the region because many of these nations depended on China for COVID-19 vaccines and economic investment.

The visit is Pompeo's first since the country rejected a US request to land and refuel P-8 Poseidon maritime surveillance planes on Indonesian soil, according to a Reuters report. 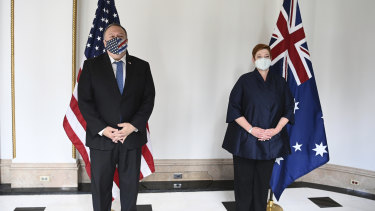 Masked diplomacy: Australian Foreign Minister Marise Payne in Tokyo ahead of the Quad meeting on Tuesday.Credit:AFP

Asia Maritime Transparency Initiative director Greg Poling said that request was a "bridge too far" for the Indonesian government.

"There is no world in which Indonesia would welcome anyone’s personnel in uniform on their soil."

The Trump administration is frequently critical of China, including its island building in the South China Sea, its handling of the coronavirus pandemic and its trade practices, and has ramped up US diplomatic efforts to promote a "free and open Indo-Pacific".

To that end, Australia will participate next month in naval exercises involving the United States, Japan and India for the first time since 2007, in a move that deepens cooperation between the so-called Quad countries.

And while much of Europe, India, Japan and Australia agreed with the United States' tougher line on China, Poling said Indonesia would never sign up to a grouping like the Quad.

"Indonesia will look after Indonesia's interests."

Our weekly newsletter delivers expert analysis of the race to the White House from our US correspondent Matthew Knott. Sign up for the Herald‘s newsletter here, The Age‘s here, Brisbane Times‘ here and WAtoday‘s here.

anti-Chi, bolster, efforts, to, Us
You may also like: