Victoria has recorded no new cases of COVID-19 in hotel quarantine, with the total number of active cases in the state remaining at 10.

There have been no cases of community transmission in Victoria for 55 days.

The state's 10 active cases include a 15-year-old girl who contracted coronavirus while travelling with her family in the northern beaches area of Sydney last week.

She remains in isolation at home, while both her close and secondary contacts have all tested negative.

The results on Thursday come as a result of nearly 20,000 tests conducted on Wednesday.

The state's continued run of zero community-acquired cases comes after coronavirus logistics chief Jeroen Weimar on Wednesday confirmed the border would stay closed until after Christmas.

Mr Weimar made comments as the northern beaches outbreak in Sydney grew by eight cases on Wednesday.

On the back of relatively few new cases in the cluster, the NSW government's crisis cabinet agreed to “modestly” ease restrictions for a three-day window over Christmas.

Meanwhile, hundreds of the Victorians who have been allowed to return home faced another challenge this week after they were mistakenly sent text messages telling them they were close contacts of confirmed cases and must isolate.

Some called the Health Department hotline and were told to ignore the message, while others were told to keep isolating. They were later told there had been a mix-up in which people who applied for a permit to enter Victoria had erroneously received the warning. 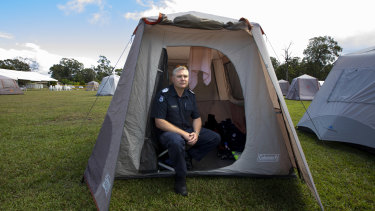 Victoria Police Acting Senior Sergeant Colin Shepherd who was deployed from the Bass Coast sits in his tent at Cann River on Wednesday.Credit:Rachel Mounsey

At the NSW-Victoria border, about 100 Victoria Police officers will be forced to spend Christmas in small tents in a field after the Defence Force said it had more important priorities than patrolling state frontiers.

corona, New, No, records, Victoria
You may also like: