On his first foreign trip since taking office in September, Suga held talks on Monday with Prime Minister Nguyen Xuan Phuc in Hanoi, where the two also affirmed their cooperation on security issues including tensions in the South China Sea and the threat posed by North Korea, Suga said a joint news briefing. 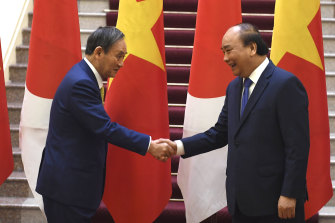 Details of the military deal were not immediately available but Japan was seeking an agreement to export defence equipment, including patrol planes and radar to step up Vietnam's surveillance capabilities, Kyodo News reported ahead of the meeting, citing Japanese officials. The two countries agreed to resume passenger flights that had been suspended due to the coronavirus pandemic, Suga said.

"It's a big step in terms of security for our two countries to reach a substantive agreement on the transfer of defence technology and equipment," Suga said.

Phuc welcomed Japan's "active role in contributing to the regional and global peace and stability." He said both countries agreed that regional disputes should be resolved "without the use of violence or threats of violence." 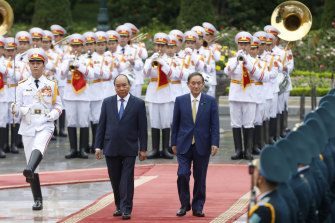 Japan and Vietnam both face the dilemma of having China as their largest trading partner and as an adversary in territorial disputes. They have also been dragged into the fray in the months of confrontations between Beijing and the US.

"We will promote the diversification of the supply chain," Suga said, adding this will include the procurement of medical supplies made in Vietnam.

The Japanese Prime Minister has been looking for an expansion of subsidies for firms that diversify their supply chains, to help businesses dilute the concentration of production in China, the Nikkei newspaper reported last week. Vietnam, Japan's seventh-largest trading partner, is likely to be among the key beneficiaries of such a move.

Suga's visit to Hanoi is the latest example of the delicate balance he faces between neighbouring China and the US, Japan's only formal military ally. It comes less than two weeks after he hosted a ministerial-level meeting of the so-called Quad, a group of democracies also including the US, India and Australia, which China has criticised as "stoking a new Cold War".

Ties between China and Japan appear to have turned chillier. Earlier this month, a Chinese government vessel spent a record of more than 57 continuous hours in waters that Japan claims as its territory around uninhabited isles known as the Senkaku in Japan and the Diaoyu in China, prompting repeated protests from Tokyo.

Meanwhile, tensions in the South China Sea remain high, with Vietnam among the nations that dispute China's territorial claims, affecting access to energy reserves and fishing zones, as well as freedom of navigation in waters through which $US3 trillion ($4.2 trillion) in trade transited in 2016.

Suga's predecessor, long-serving premier Shinzo Abe, worked doggedly to improve ties with China that were at their worst in decades when he came to office in 2012. His efforts were set to be crowned with a state visit by Chinese President Xi Jinping that was planned for the northern spring. That was postponed indefinitely amid the coronavirus pandemic, and Beijing's clampdown on Hong Kong prompted some in Japan's ruling Liberal Democratic Party to call for the trip to be cancelled altogether.

Suga will also visit Indonesia before returning to Tokyo later this week.

deal, defence, Lands, Vietnam, WIT
You may also like: