Was 11-minute phonecall to journalist evidence that damned Williamson?

Was 11-minute phonecall to journalist the evidence that damned Williamson? Sacked Defence Secretary ADMITS he spoke to reporter but denies secrets were revealed

Gavin Williamson has admitted to an 11-minute telephone conversation with a journalist on the day information from the National Security Council was leaked, it has been reported.

It is one of the first indications as to why the former defence secretary may have been sacked by Theresa May yesterday. He is alleged to have revealed secret NSC discussions about Chinese telecoms giant Huawei’s involvement in the development of the UK’s 5G mobile network.

Officials have not revealed what they found to implicate Mr Williamson, but in a letter to the South Staffordshire MP the Prime Minister Theresa May claimed ‘compelling evidence’ suggested he was responsible. 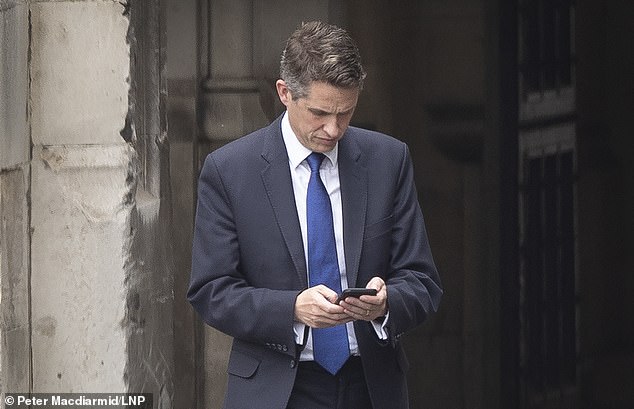 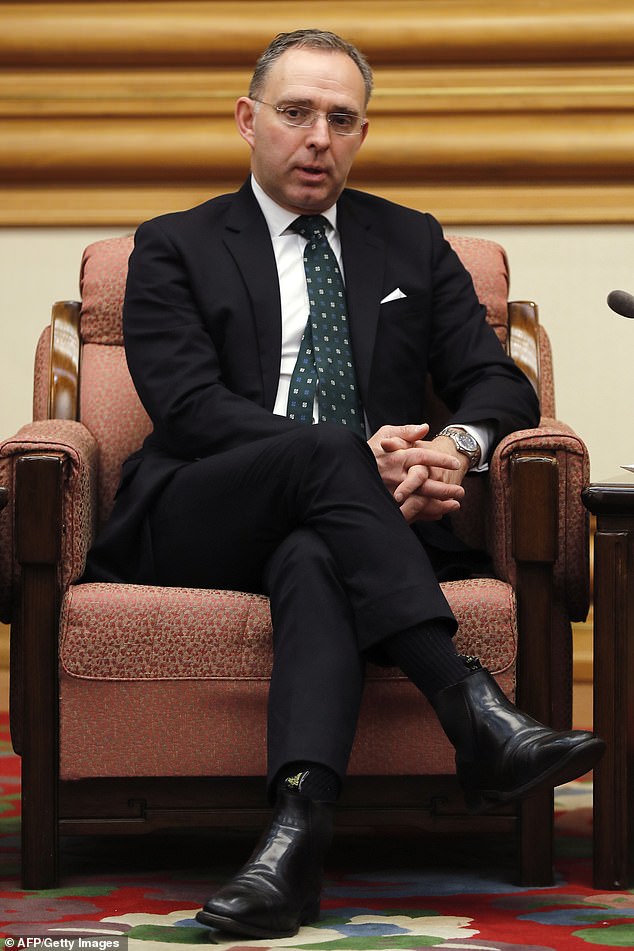 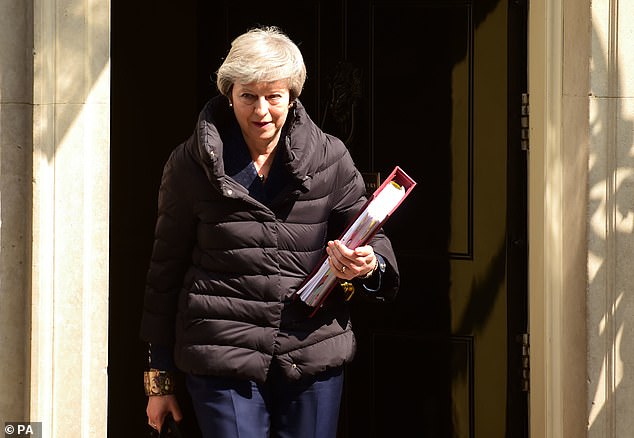 Officials have not revealed what they found to implicate Mr Williamson, but in a letter to the South Staffordshire MP the Prime Minister Theresa May (pictured) claimed ‘compelling evidence’ suggested he was responsible

Sources close to Williamson last night revealed he had admitted to having a telephone conversation with Daily Telegraph Deputy Political Editor Steven Swinford after the National Security Council meeting last week, as reported by The Sun.

And it was Steven Swinford who later broke the news that Mrs May had reportedly given the green light to Huawei the help build Britain’s 5G network. A move which parked a massive political row.

But Mr Williamson has insisted they talked about Brexit and the upcoming euro elections, according to reports. And not the recent NSC meeting, at which it is alleged discussions were had on allowing Huawei to work on the 5G network.

The 42-year-old has insisted he is innocent, and recounted to the Daily Mail what he told Mrs May: ‘I have never leaked anything from the National Security Council, nor would I.

‘I absolutely promise, hand on heart, I did not leak this. I realise my obituary will say I did, but I swear on my children’s lives I did not.’ 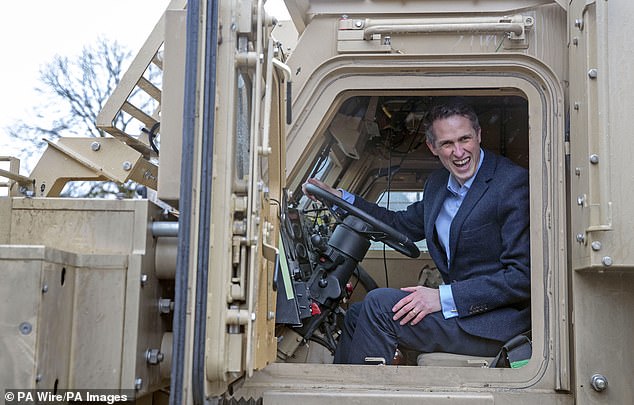 Williamson (pictured) maintained his innocence in a letter to Mrs May, in which he cast doubt on the investigation conducted by Cabinet Secretary Sir Mark Sedwill 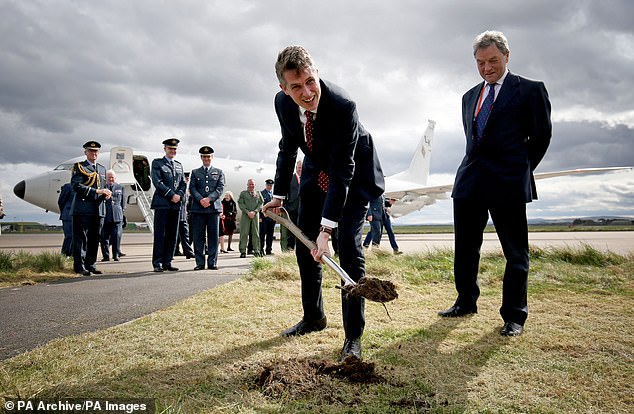 He also maintained his innocence in a letter to Mrs May, in which he cast doubt on the investigation conducted by Cabinet Secretary Sir Mark Sedwill.

‘I strenuously deny that I was in any way involved in this leak and I am confident that a thorough and formal inquiry would have vindicated my position,’ he wrote.

Mr Williamson revealed that he rejected an offer from Mrs May to resign rather than be sacked, saying that this would have sent a signal that he accepted that either he or his team was guilty.

Telling Mr Williamson of his dismissal, Mrs May said she was ‘concerned’ at the manner in which he had engaged with Sir Mark’s inquiry.

As the shock waves from his firing continue to reverberate across Westminster, Labour branded the ex-Cabinet minister ‘treacherous’ and demanded the Prime Minister make an emergency statement to the Commons on Thursday.

The controversy continued to rage as voters were going to the polls in local elections across England and Northern Ireland on Thursday, as opposition parties demanded a police probe into the affair. 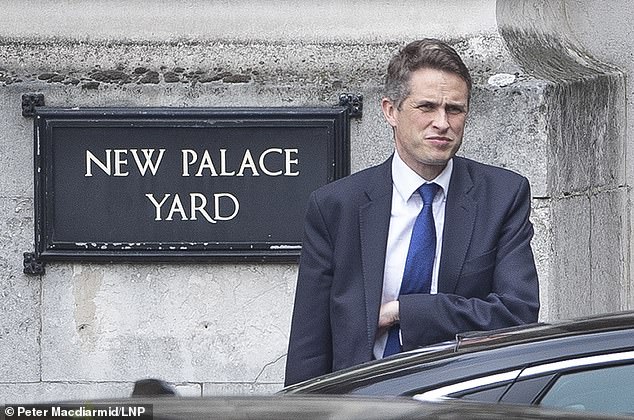 Mr Williamson told the BBC that he was not the source of the leak and that neither he nor his team would do such a thing. 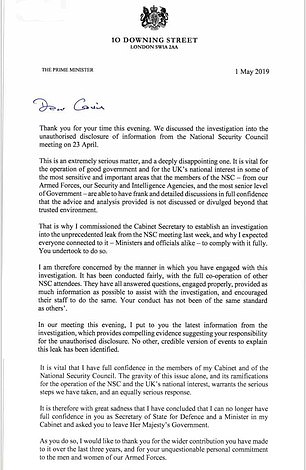 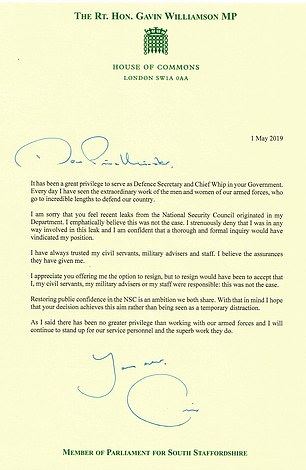 The Prime Minister sacked Gavin Williamson tonight, setting out her reasons in a letter to the former minister

Labour’s shadow defence secretary Nia Griffith told BBC2’s Newsnight: ‘Clearly, there’s a real breakdown in discipline and Theresa May now needs to take absolutely firm action, and, quite frankly, I think she needs to call in the police and have a full investigation, because we are talking, actually, breaking the Official Secrets Act and, actually, there may well be a case to answer here.’

‘I think it was absolutely treacherous – both to the country, but also to the Prime Minister.

‘We have here a case of yet another Tory minister putting leadership ambition before the good of the country.’ 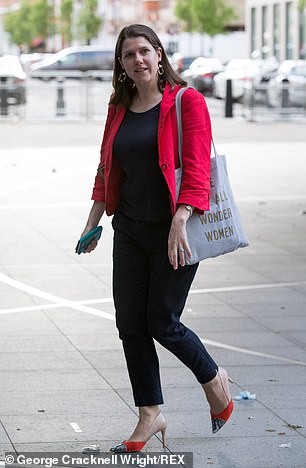 Former national security adviser Lord Ricketts told the BBC: ‘On the face of it, this is a breach of the Official Secrets Act. All the ministers and officials around the table will have signed that.

‘It would be for the Director of Public Prosecutions to make the decisions, not ministers.’

The letter states: ‘I am writing to ask you to open a criminal investigation to ascertain whether the actions of Mr Williamson constitute a breach of the Official Secrets Act.’

Sky News political editor Beth Rigby tweeted that Mr Williamson told her he ‘wanted a police investigation because I would have been cleared. They would have had to have evidence. That is what I wanted’.

Ms Rigby said the ex-minister told her the situation was ‘a witch-hunt from the start’ and he had been ‘in a kangaroo court with a summary execution’.

Asked about the possibility of a prosecution, Mrs May’s official spokesman told a Westminster briefing: ‘It is not for the Government to determine prosecutions, but the Prime Minister has said, from her point of view, that she considers the matter to be closed.’

Scotland Yard said in a statement that it was a matter for the NSC and the Cabinet Office and it was not carrying out an investigation at this time.

‘Clearly, if at any stage we receive any information that would suggest criminal offences have been committed, then we will look into that,’ it added.