Our live coverage of the extreme weather is free for all readers. Please consider supporting our journalism with a subscription.

The Murray River has passed its major flood level in Echuca and authorities remain concerned that forecast rain may bring more flooding to the already stricken town of Rochester.

Victorian State Emergency Service chief operations officer Tim Wiebusch said the expected peak of the Murray River at Echuca on the state’s NSW border had been pushed back to early next week, giving the town a “bit of a reprieve”.

But he feared the already inundated town of Rochester, about 200 kilometres north of Melbourne, may have even more flooding if forecast rain hovers above the area for two to three days.

The Bureau of Meteorology’s forecast for Echuca shows a 95 per cent chance of rain on Friday, with rain also predicted for the next six days.

Wiebusch said there had been a small amount of rain overnight in Echuca, but isolated thunderstorms could bring between 20 millimetres and 30 millimetres in the next 48 hours.

“The key difference is we won’t see that widespread rain band with hundreds of millimetres of rain like we saw in the previous event. This is very much about localised flooding in the first instance,” he told the ABC. 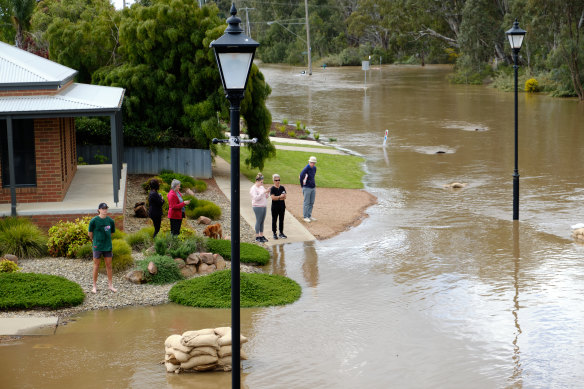 “If we’re unlucky enough to get two or three days over the same places with these storms, then that will potentially put some of our rivers into renewed rises and that includes, potentially, … communities downstream of Lake Eppalock like Rochester.”

Tim Williams, from the SES in Rochester, said he was waiting on an update from higher up the command chain on the likelihood of flooding.

“We’re in a holding pattern until the information comes down through the chain of command,” he said.

Williams said a huge cleanup effort continued in the town, but many houses were currently unlivable. 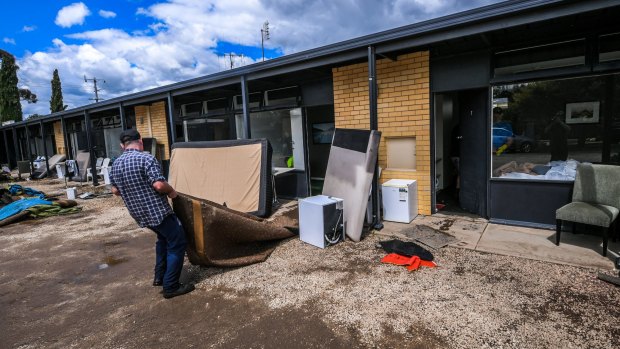 He said temporary accommodation was desperately needed while houses were repaired.

“With the amount of devastation in some of these houses at the moment, who knows how long it will be until they’re livable,” he said. “Temporary housing is going to be absolutely paramount in this town.”

Further north-west, the town of Kerang is bracing for flooding from the Loddon River.

However, there is growing confidence within Kerang that the town will avoid major flood damage, with local emergency services buoyed by the news that the tiny township of Appin South has remained above water.

Appin South has the last water gauge downstream from Kerang and is the best guide to where the Loddon will peak in the coming days, unless there is more substantial rain.

In 2011, when devastating summer floods inundated 41 homes and five businesses in Kerang, the township of Appin South was swamped.

Mayor Charlie Gillingham said the Loddon River had risen 200 millimetres in the past 24 hours.

He said extensive vegetation growth was slowing the speed of the river, which is expected to peak on the weekend.

“The water is travelling very slowly because of prolific growth we’ve had this spring,” he said. “We’ve got some fantastic crops that have been absolutely smashed.”

Authorities have issued an emergency warning for Kerang that it is too late to leave. But Gillingham said some roads still remained open.

Some residents have already left the town following warnings it could be cut off for up to a fortnight. Most shops remained open, Gillingham said, but would probably reduce their trading hours in preparation for the looming flood.

However, he hoped the town’s levee would help avert a disaster.

“This rain that’s forecast can go away,” he said. “We don’t want any rain.”