There’s no easy solution to Melbourne’s embarrassingly low number of statues of women, but help could be at hand in a couple of storage lockers.

A survey by the cleverly named lobby group A Monument of One’s Own revealed that of Melbourne’s 580 public statues, only nine are of real women. 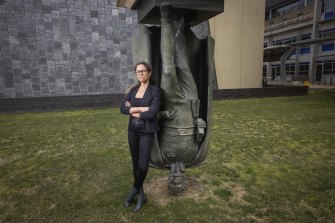 It turns out we could engineer a huge increase in our female statue population just by finding a home for a few statues of women we prepared earlier.

Three of these are sitting in storage containers wrapped in plastic like Twin Peaks’ Laura Palmer.

Iconic opera singer Dame Nellie Melba has been commemorated in bronze, but she’s been stored away in an unidentified warehouse by Development Victoria since 2016 as it looks for a permanent position for her.

It’s the same story for pop star Kylie Minogue whose body stocking clad likeness has also been removed from public display without a place that she should be so lucky, lucky, lucky to call home.

Our top female athletes don’t fare much better with AFLW footballer Tayla Harris and her legendary high kick parked in a NAB storage facility while athlete and politician Nova Peris is about to be exiled from Federation Square to Essendon’s training facility at Tullamarine.

Both the City of Melbourne and the state government claim they want to see more statues of women with the government last month announcing a $1 million fund for women artists to create statues and sculptures of women.

While the artists are busy getting creative it seems that a good first step could be just finding a spare spot to put one of our glad wrapped women statues on display.

The lack of statues of women is not a problem unique to Melbourne or even Australia.

A Monument of One’s Own reckons there are more statues of animals across our country than there are women.

It’s a similarly depressing story around the rest of the world with groups from the United Kingdom to the United States trying to tackle statue gender imbalance.

Of course you could argue that there are bigger and more important things to worry about than statues.

In a week when Sex Discrimination Commissioner Kate Jenkins’ damning review of sexism in parliamentary workplace culture was published and the recent departure of politicians who stepped down or aside because of allegations of misconduct and abuse, there are certainly plenty of living and breathing gender issues to be concerned with.

However Professor Clare Wright, who heads up A Monument of One’s Own in Australia, says the lack of statues of women illustrates the “respect gap” women face.

If the only people we think are worth commemorating are men what signal does that send out about respecting women?

This absence of respect is the common thread between issues like the high rates of violence against women and the ongoing gender pay gap.

When you look at it in this way a statue is more than just a statue, it illustrates how we see and are seen in our world.

We need to open up the storage lockers and get some more women on Melbourne’s plinths.

It’s time for some commemorative justice.