Follow
Home » World News » ‘We’re bringing Flemington to us’: The view from the pubs and parks of Derby Day 2020

In a Derby Day like no other, Melburnians found a way.

Pub dining rooms filled in for trackside marquees. City parks made do for the grass alongside the Flemington straight.

Out came the frocks and hats, the traditional black and white. So did the champagne. 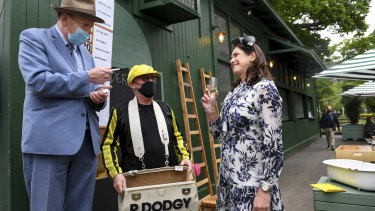 Gill Whelan with “bookies” Tony Richards (AKA P. Dodgy) and John Wells (AKA Jim Pyke) at The Commons at Ormond Collective.Credit:Penny Stephens

The Melbourne sun, too, played its familiar role, straining all afternoon, and failing, to peak through the overcast gloom.

Though it was Derby Day by distance, those with an interest in the races, or fashions, were simply happy to be out and about at all.

"These are our closest friends and we haven't seen them in ages," says Gill Whelan at the Commons at Ormond Collective, formerly the Belgian Beer Garden.

"So we're super excited to be here catching up in person: a little flutter on the races and just enjoying each other again. 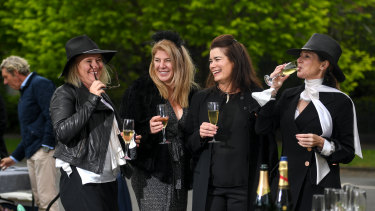 "At least we don't have to travel out there to Flemington on the train and try and make our way back. We're more central here and we're supporting Melbourne businesses instead."

In Howe Crescent Reserve in South Melbourne, Kari Chantrell and friends had set up a gazebo – something of a marquee – and snacks had been assembled on a black-and-white tablecloth. They had iPads to watch the races and a portable speaker for music in between.

A white board listed the afternoon's tips. 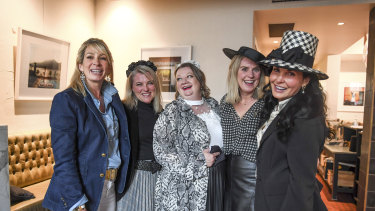 "I think we've got everything covered," said Ms Chantrell, who is missing only her third live Victoria Derby in 33 years.

"We couldn't all get in [to a venue] together so we took it to the park. We're bringing Flemington to us."

Back at The Commons, Matcho Suba, a fashion designer and milliner, was having a particularly unusual Derby Day, his favourite of the Spring Carnival for its monochrome theme.

Usually by mid afternoon, after a frantic morning of filling orders, he'd be trackside mingling with clients and soaking up the fashions. 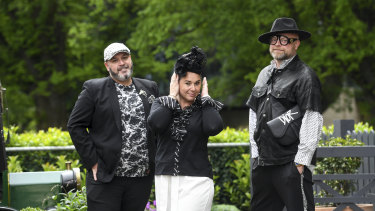 Lee Cleal, Angelina Beninati and fashion designer and milliner Matcho Suba (Angelina in one of Matcho’s creations) at The Commons.Credit:Penny Stephens

"Instead, I'm here," he says. "And it's amazing. This is our first lunch out for four months.

"We went out to dinner [Friday night] and it was a bit emotional, actually, to be able to see people, interact with people. To be served by someone else instead of your partner at home."

In need of some good news?

Stories that will brighten your outlook, delivered weekly to your inbox. Sign up now for our Greater Good newsletter that is launching soon. Sign up to The Age here; Sydney Morning Herald here; Brisbane Times here and WAtoday here.