Follow
Home » World News » What is the weather forecast in the UK today according to the Met Office and where are there weather warnings?

What is the weather forecast in the UK today according to the Met Office and where are there weather warnings?

The weather comes as autumn gets into full swing – here's what you need to know. 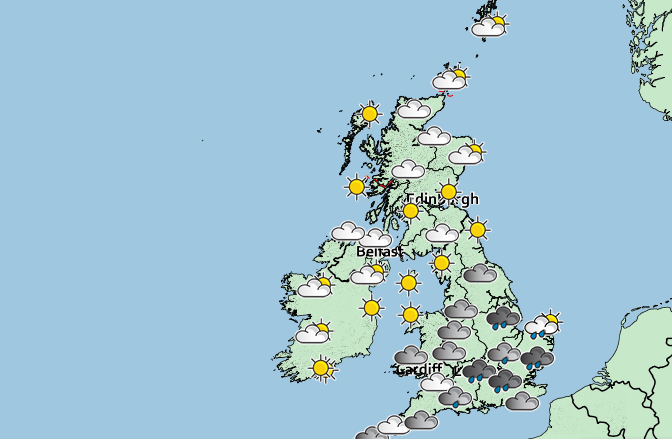 Both Saturday and Sunday have been described as a “story of two halves” with it being wet in the south and dry in the north today.

However, Sunday will see the exact opposite – with the weather being much nicer in the south and wet and windy in the north.

Parts of Scotland will feel the force of the strongest winds this weekend where gales could reach up to 50mph.

And this evening temperatures are set to plunge to below freezing with parts of Wales, the Midlands, southern England and the Scottish borders experiencing lows of -3C tonight and the early hours of Sunday.

But temperatures will start to pick up from Monday and parts of the south and London area could experience highs of 24C by the middle of next week.

When does the Met Office issue weather and flood warnings?

The Met Office warns the public and emergency responders of severe or hazardous weather which has the potential to cause danger to life or widespread disruption through the National Severe Weather Warning Service.

These warnings are given a colour depending on a combination of the likelihood of the event happening and the impact the conditions may have.

There are a number of ways you can find out whether your area is at risk from flooding.

The Environment Agency, the Scottish Environment Protection Agency and Natural Resources Wales update their warnings 24 hours a day via the Floodline number.

When was the heaviest rainfall in the UK?

The highest 24-hours of rainfall in England occurred in Cumbria on December 5, 2015.

According to the Met Office 341.4mm of rain fell at Honister Pass, Cumbria, in 24-hours, a new UK rainfall record, while at Thirlmere 405mm also set a new record for two consecutive rain-days.

And on November 11, 1929, Lluest Wen Reservoir in Wales was flooded with 211mm of rainfall.

The record for Northern Ireland was in 1968 at Tollymore Forest, County Down, which saw 159mm.

forecast, I, is, the, Weather, what
You may also like: