A white woman has been caught on camera calling cops and telling them an African American man was threatening her life after he simply asked her to put her dog on a leash in New York’s Central Park on Monday.

Amy Cooper, 41, has since apologized and has been placed on administrative leave from her job as head of insurance investment solutions at Franklin Templeton pending an investigation into the incident involving bird watcher Christian Cooper, 57.

She also returned her dog to a rescue after viewers expressed concern about her treatment of the animal.

Christian, who does not appear on camera, claimed in a Facebook post that he had earlier alerted her to a sign that states dogs cannot be walked in the Rambles without a leash as it’s an area that protects wildlife. 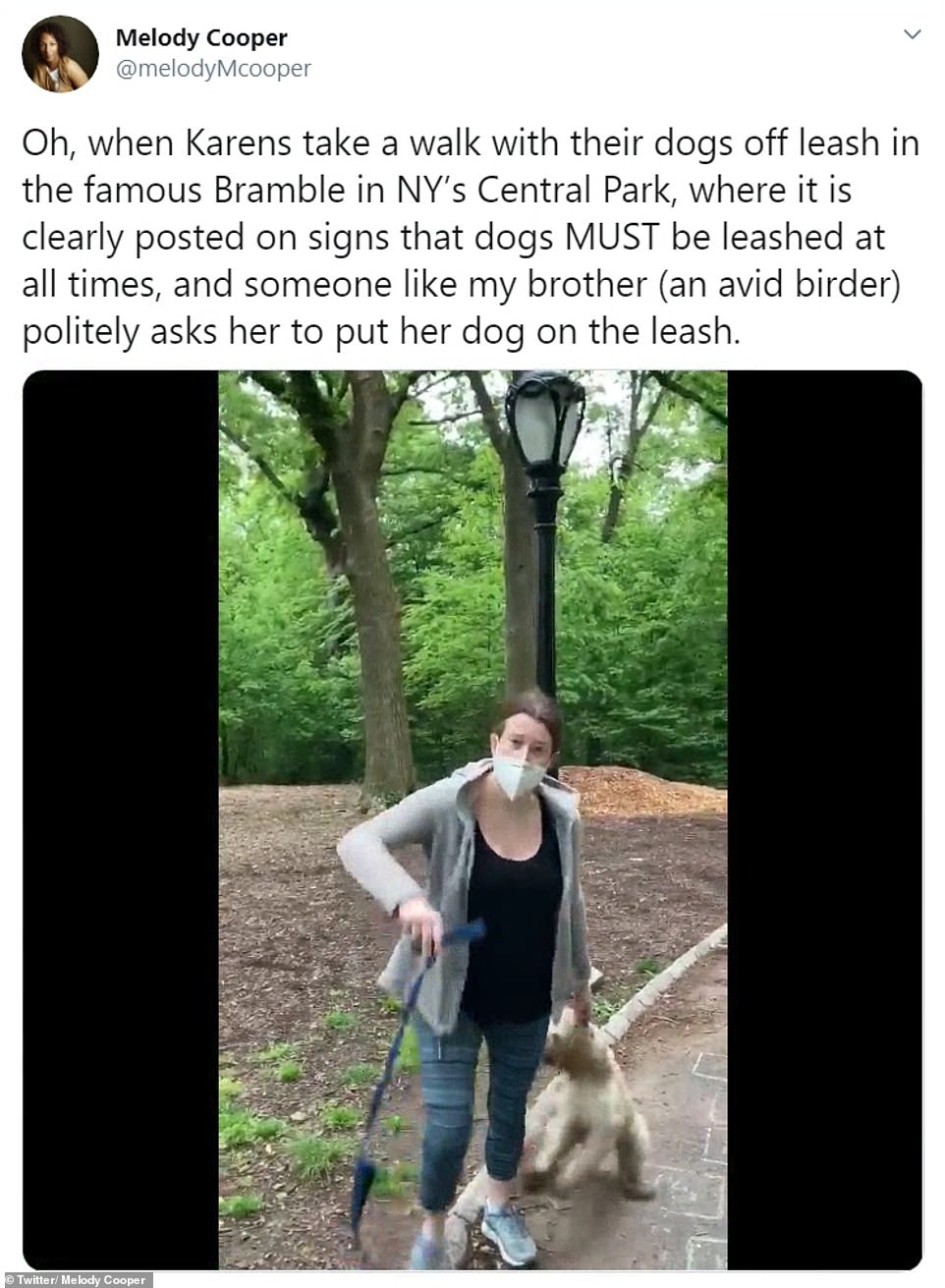 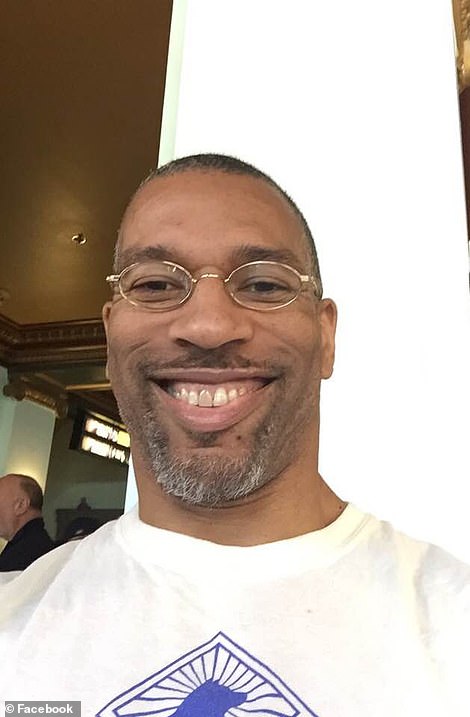 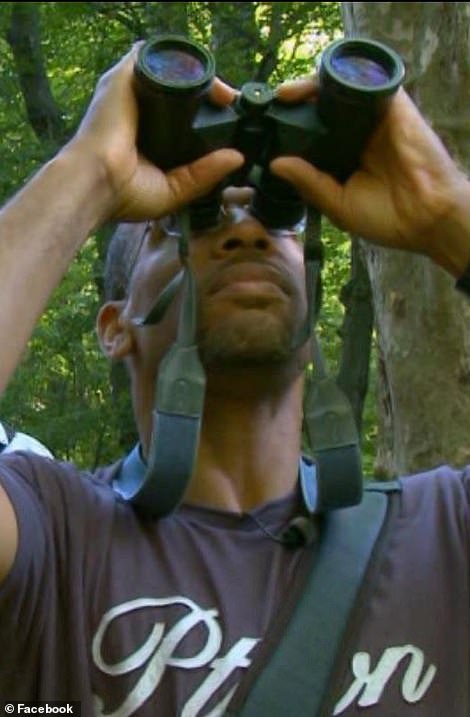 Christian Cooper is an avid birdwatcher who noticed the dog unleashed in a wildlife protected area in Central Park but he claims when he asked her adhere to rules, she refused 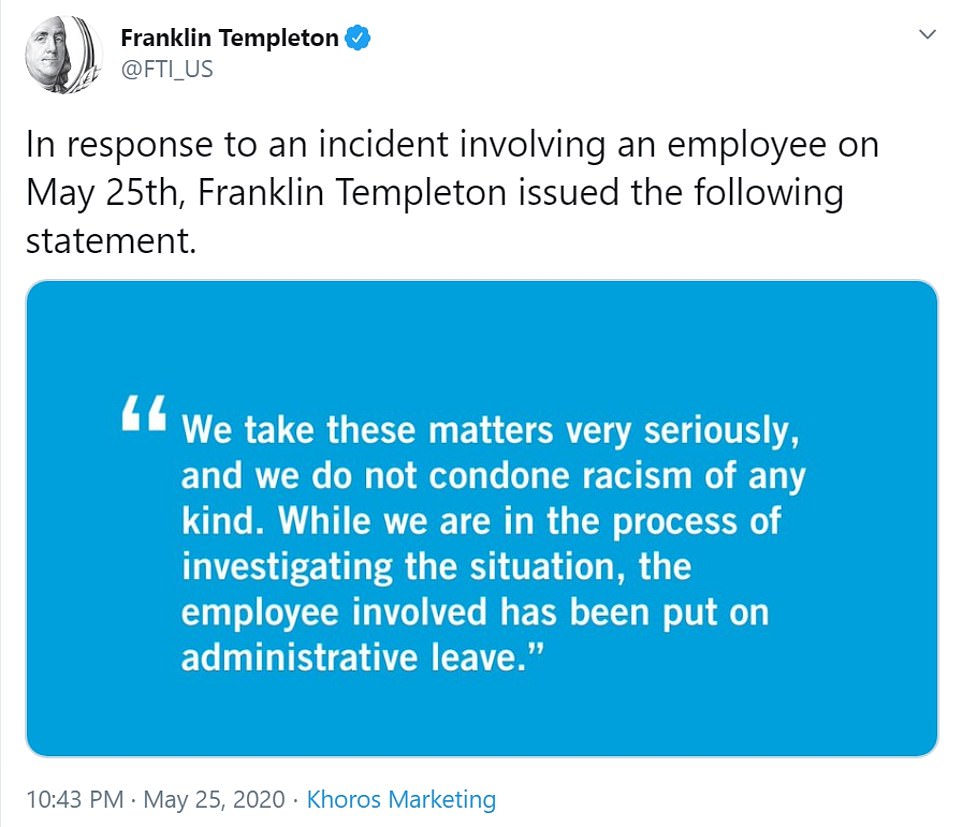 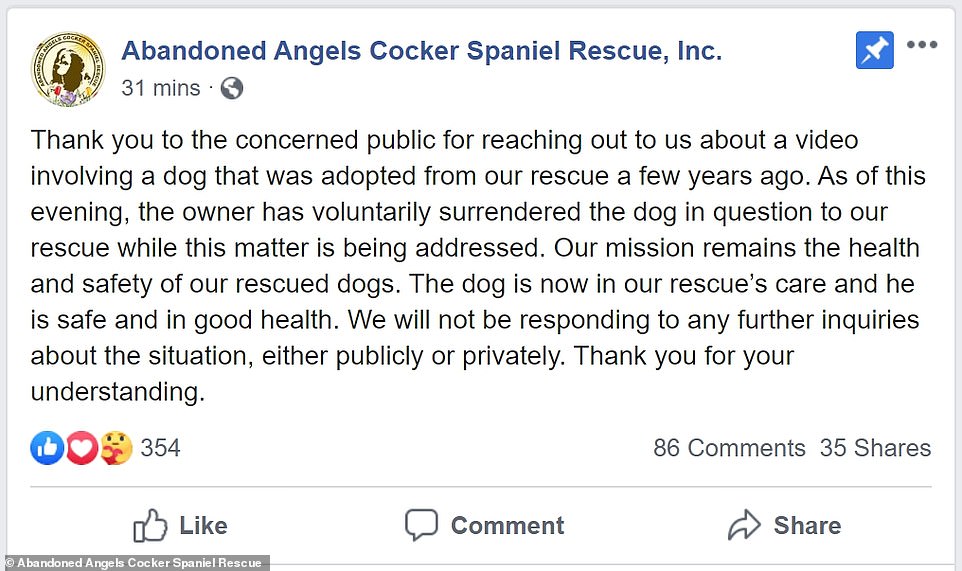 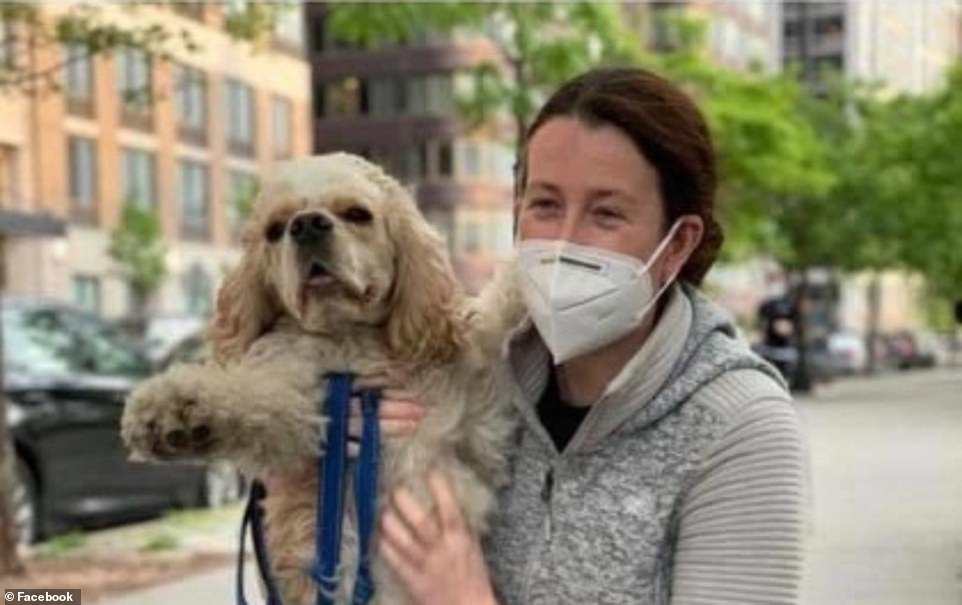 ‘I sincerely and humbly apologize to everyone, especially to that man, his family.

‘It was unacceptable and I humbly and fully apologize to everyone who’s seen that video, everyone that’s been offended…everyone who thinks of me in a lower light and I understand why they do.

‘When I think about the police, I’m such a blessed person. I’ve come to realize especially today that I think of [the police] as a protection agency, and unfortunately, this has caused me to realize that there are so many people in this country that don’t have that luxury.’

The man, who is an avid bird-watcher, claimed she replied that the dog runs are closed and her pet ‘needs his exercise’.

Christian explained in a Facebook post that he replied: ‘All you have to do is take him to the other side of the drive, outside the Ramble, and you can let him run off leash all you want.’

He states she replied: ‘It’s too dangerous.’

He then beckoned the pooch toward him and pulled out ‘dog treats I carry for just for such intransigence’.

But he stated he didn’t get a chance to toss any treats ‘before Karen scrambled to grab the dog’ and yelled: ‘DON’T YOU TOUCH MY DOG!’

‘That’s when I started video recording with my iPhone, and when her inner Karen fully emerged and took a dark turn…’ he wrote on Facebook Monday.

In the clip he responds: ‘Please don’t come close to me’ several times as the woman asks him to stop filming then tells him she’s calling the cops.

When Christian invites her to ‘please call the cops’, she responds, ‘I’m going to tell them there’s an African American man threatening my life.’

Christian responds to the dog owner: ‘Please tell them whatever you like.’

She is then heard saying: ‘I’m in the Ramble and an African American man with a bicycle helmet, he is recording me and threatening my dog.’ 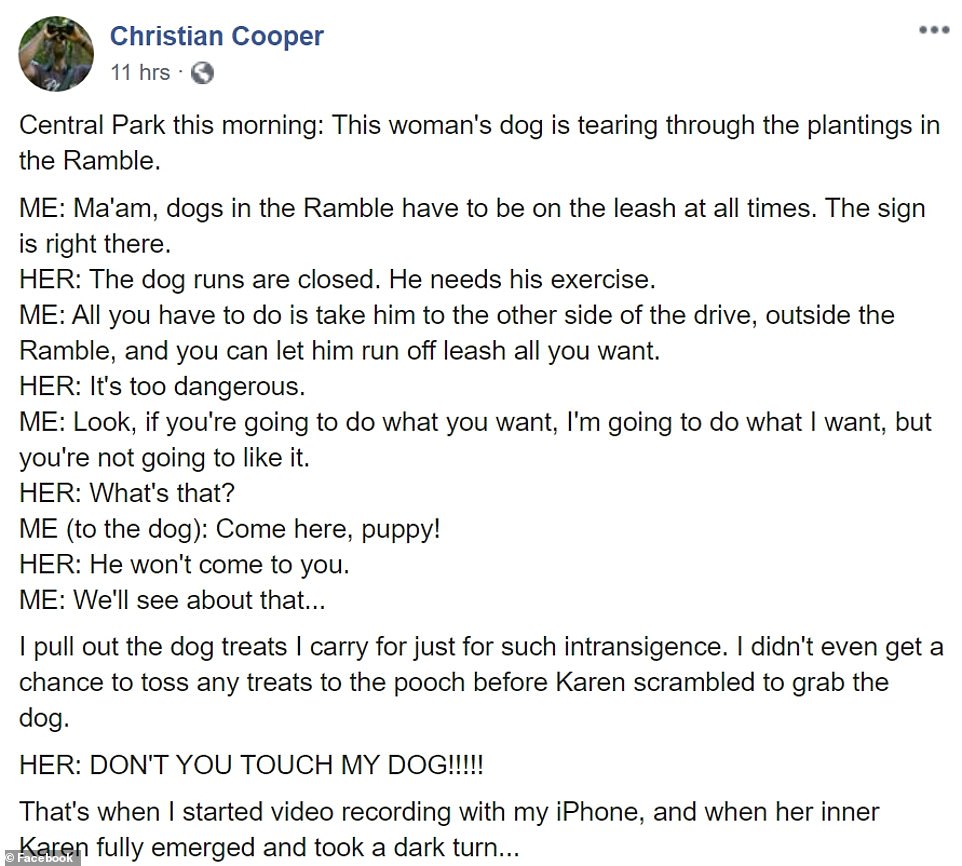 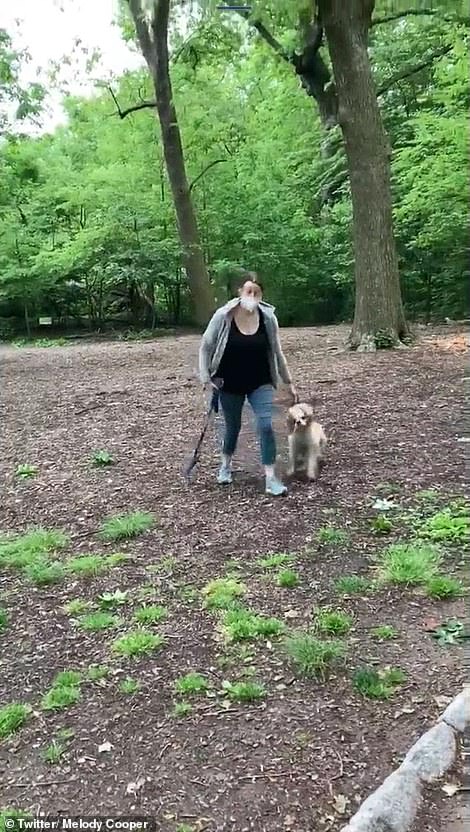 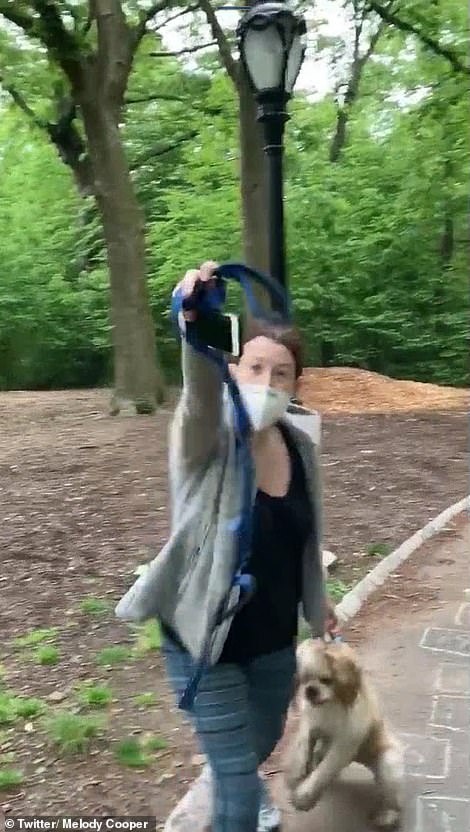 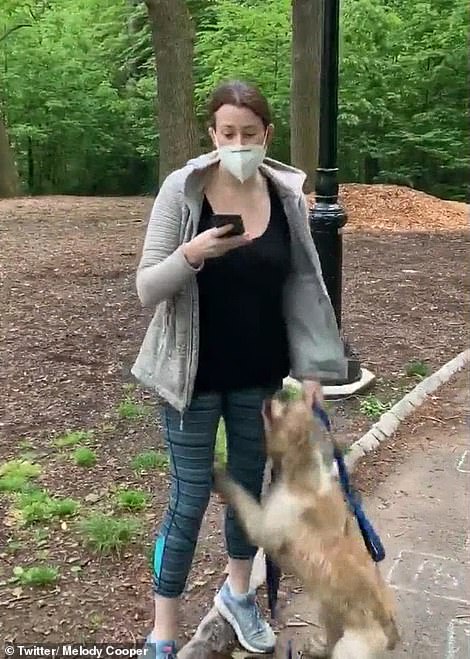 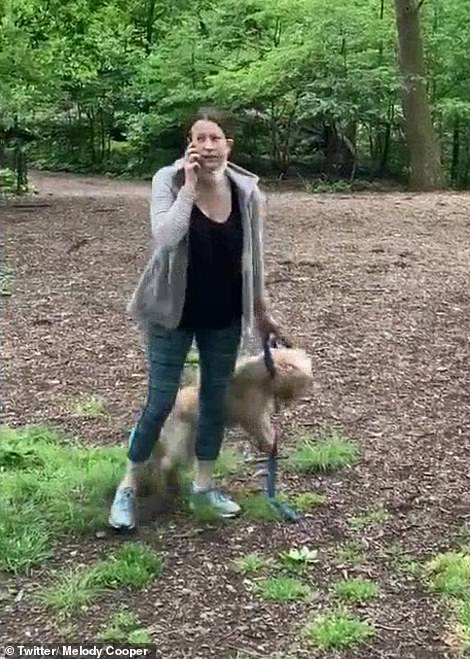 ‘I’m going to tell them there’s an African American man threatening my life,’ she says as she gets closer to the man she apparently fears. The man tells her to say whatever she wants 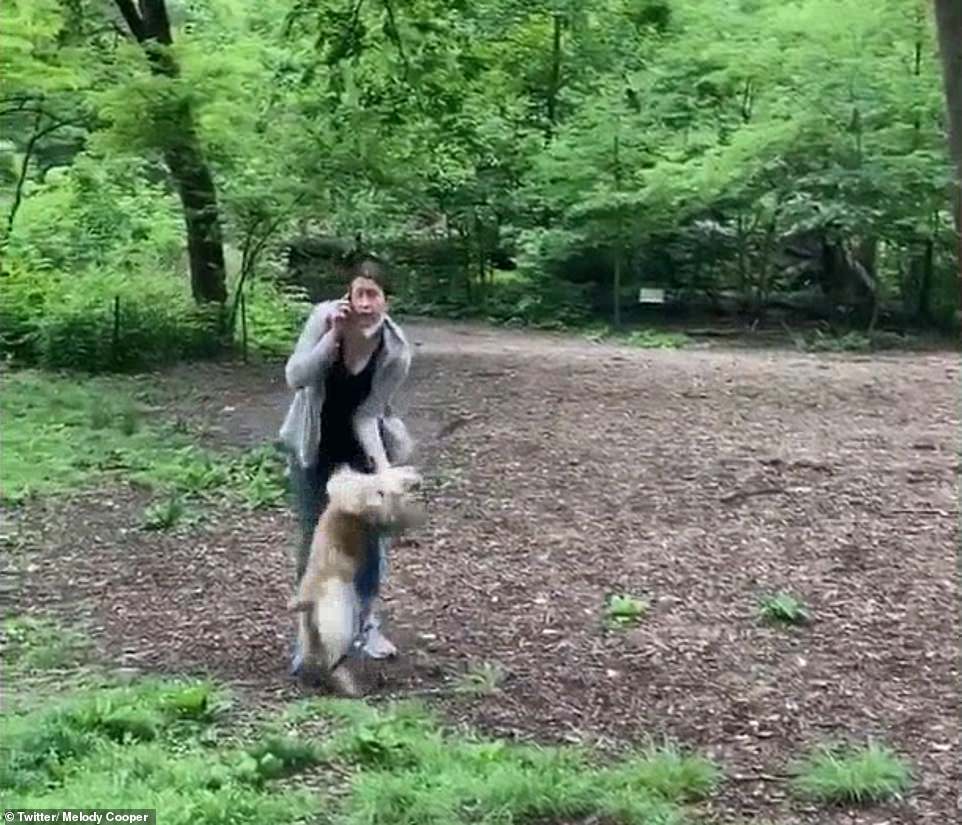 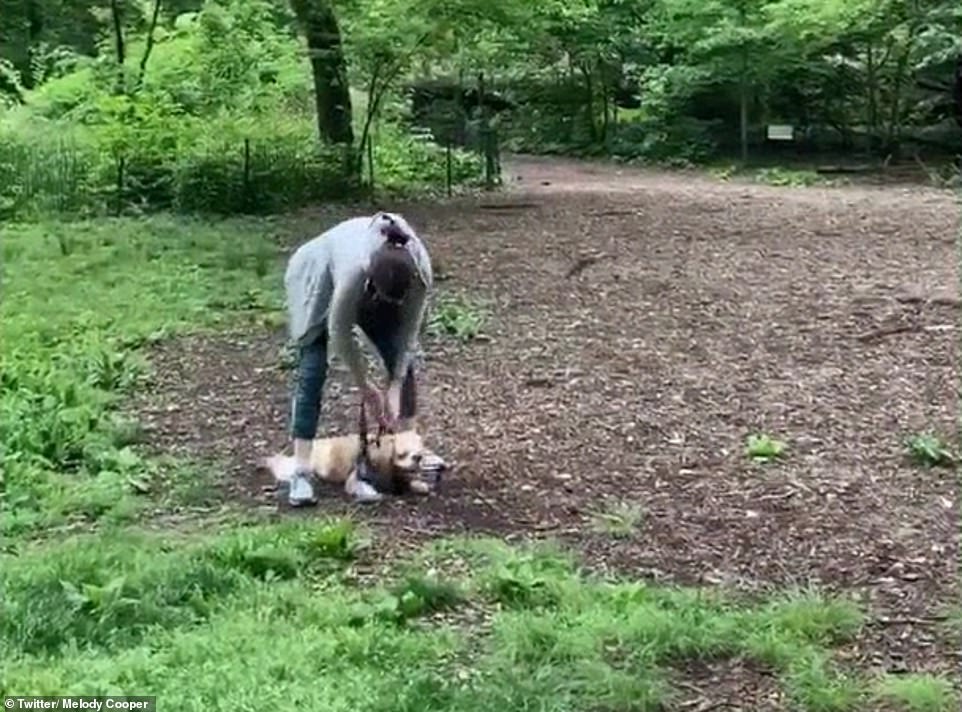 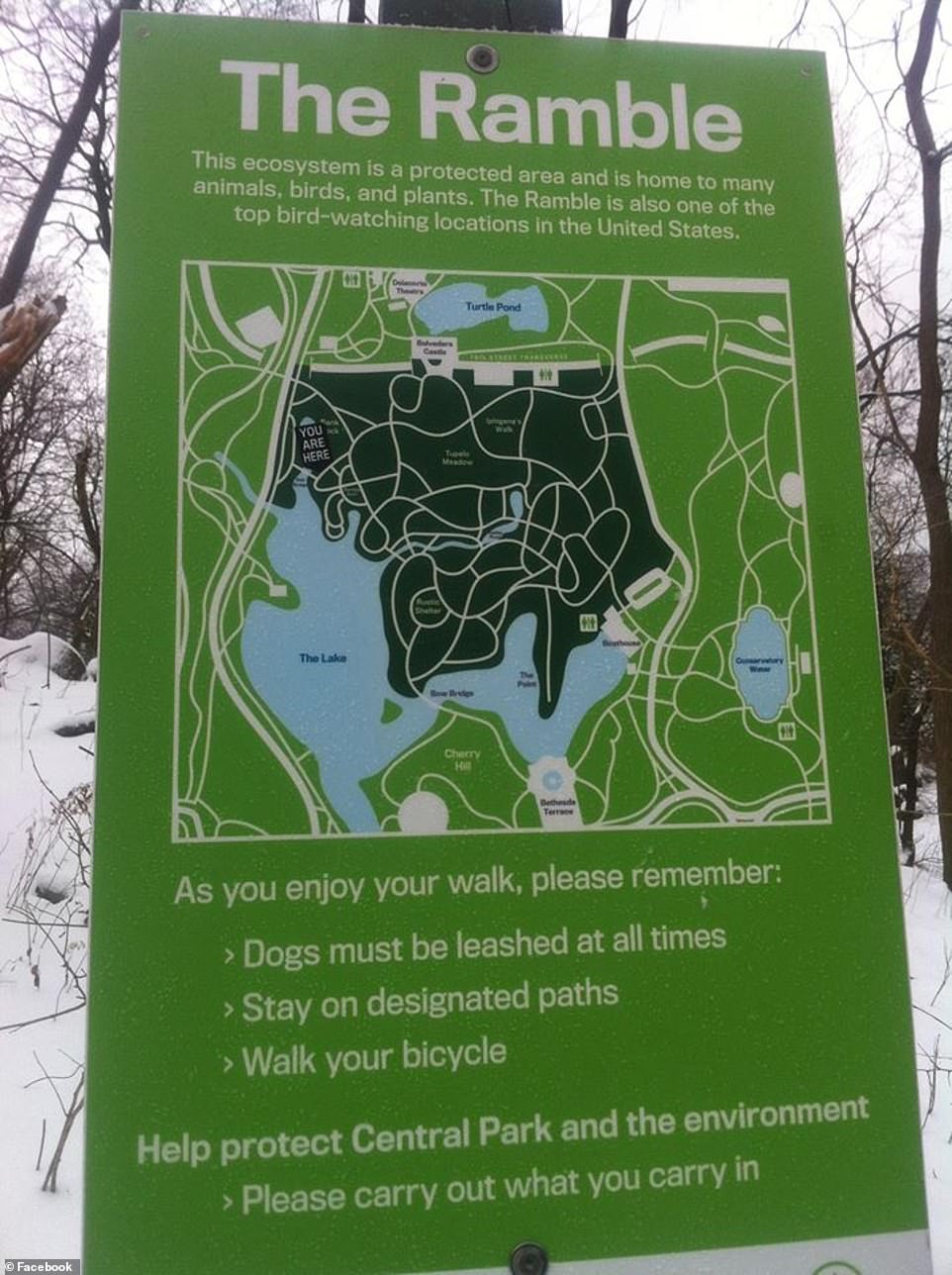 In the Ramble Central Park, New York City, dogs must be restrained at all times a sign states

She pauses for a moment then continues: ‘I’m am in Central Park, there is an African American man. He is recording me and threatening my dog.’

There is another pause as the woman listens to the other end of the phone line then she suddenly sounds hysterical. 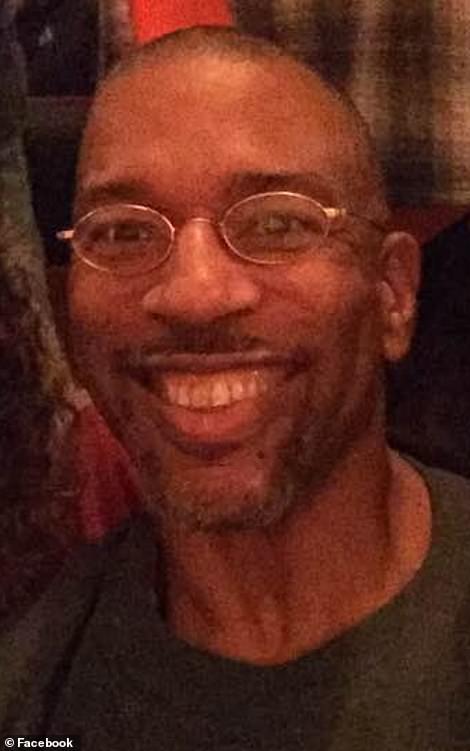 Christian Cooper’s sister explained that her sibling ‘started filming her because she refused to put her dog on a leash and he sensed she was going to go full on Karen. And she did’

‘I’m sorry I can’t hear,’ she cries. ‘I’m being threatened by a man in the Ramble, please send the cops immediately…’

After a brief pause she responds to the operator: ‘I’m in Central Park in the Ramble, I don’t know.’

At that point the woman clips the dog onto a leash and Christian responds: ‘Thank you’ and stops filming.

His sister Melody Cooper responded to a Twitter user that as soon as she leashed the dog, he said thank you, stopped filming and ‘went about his business’. ‘This kind of entitlement dog walking happens weekly in the Ramble,’ she added.

Police said they responded to the call but both Christian and Amy were no longer there.

They said a call came in for a dispute, inside of Central Park’s Ramble, around 8am but no report was filed and no arrests were made. Sergeant Mary Frances O’Donnell said no one has come forward to police since.

Cooper explained that her sibling ‘started filming her because she refused to put her dog on a leash and he sensed she was going to go full on Karen. And she did.’

Christian explained to NBC News: ‘If the habitat is destroyed we won’t be able to go there to see the birds, to enjoy the plantings. The only way they can keep the dog from eating the treat is to put it on a leash. At some point, she decided I’m gonna play the race card, I guess.’

It was a similar view shared by outraged social media users on Monday.

‘Notice how her immediate response is to tell the cops an “African American” man is ‘threatening’ her. She weaponized her tears & knows that the fastest way for cops to respond is to put her virtual white hood on. Disgusting and a reminder of Emmett Till. Nothing has changed,’ one Twitter user noted.

A Manhattan DA candidate shared her opinion on the matter Monday after the video was shared online, and vowed to make sure Christian would not become yet another victim of the criminal justice system that has been criticized for disfavoring poor black Americans.

‘This is serious. Happened today in Manhattan. As a public defender for over a decade, I have tried cases where the Manhattan DA uses a “hysterical 911 call” as categorical evidence of guilt. Usually there’s no video like this to refute it,’ Eliza Orlins explained.

‘What happens: White lady calls the cops on Black man. Cops believe her. He gets arrested and then arraigned. Outrageous bail gets set. His family cannot afford to buy his freedom. He gets sent to Rikers Island, where he sits for any number of days, months, or years.

‘Eventually the case resolves in some way–gets dismissed or he takes a plea to the charge or a lesser offense to get out because he’s threatened with doing serious time. Meanwhile, he’s potentially lost his job, his home, his children. Right now, it is even worse.

‘People are sitting on Rikers Island on the basis of nothing more than an accusation (like in this video!) with the added risk of contracting COVID-19. So, we can call out these “Karens,” but also we need a Manhattan DA who is committed to real reform. I will be that DA.’

Her tweets evoked memories of Emmett Till, a 14-year-old boy killed in 1955 after Carolyn Donham accused him of assaulting her.

Specifically, the teenagers dubbed the Central Park Five experienced were wrongly accused of raping a white woman in the New York City park. They were convicted in 1990 and each served sentences from five years to 15 years before they were exonerated. 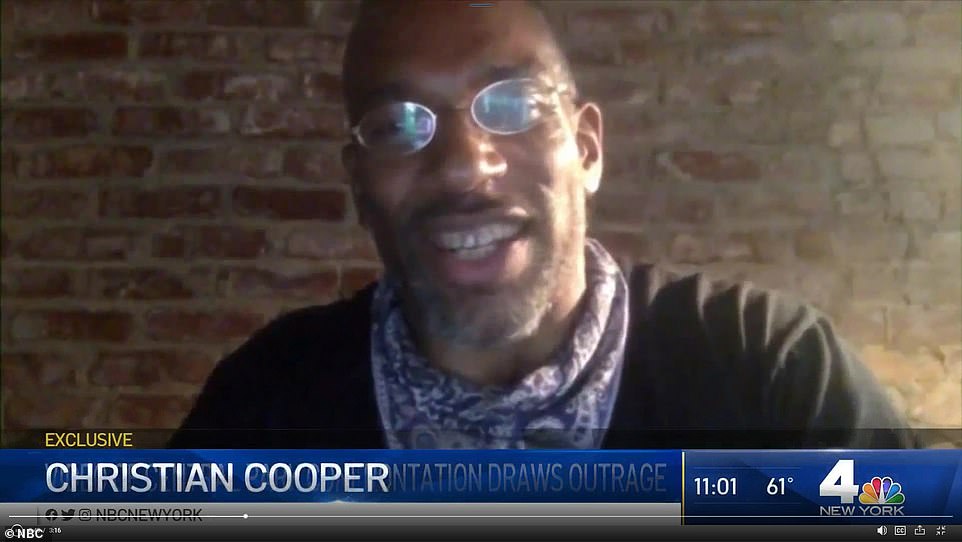 Christian explained to NBC News: ‘If the habitat is destroyed we won’t be able to go there to see the birds, to enjoy the plantings. The only way they can keep the dog from eating the treat is to put it on a leash. At some point, she decided I’m gonna play the race card, I guess’

Social media users called for the woman in Monday’s video to be fired. In response, she was placed on administrative leave on Monday night.

‘We take these matters very seriously and we do not condone racism of any kind,’ Franklin Templeton stated on Monday. ‘While we are in the process of investigating the situation, the employee involved has been put on administrative leave.’

Throughout the video the dog is seen flailing around seemingly eager to be free of Amy Cooper’s restraint as she grabs the harness by the neck without attaching a leash. It led to calls from social media for the dog to be removed from her care due to concerns she was choking it.

Viewers of the video contact Abandoned Angels Cocker Spaniel Rescue which later said the dog had been returned.

‘Thank you to the concerned public for reaching out to us about a video involving a dog that was adopted from our rescue a few years ago,’ they wrote on Facebook. ‘As of this evening, the owner has voluntarily surrendered the dog in question to our rescue while this matter is being addressed.

‘Our mission remains the health and safety of our rescued dogs. The dog is now in our rescue’s care and he is safe and in good health. We will not be responding to any further inquiries about the situation, either.’

Late on Monday Amy Cooper apologized and said she understands why people may think less of her after viewing the clip. More than 11 million people had viewed the footage.

‘When I think about the police, I’m such a blessed person. I’ve come to realize especially today that I think of [the police] as a protection agency, and unfortunately, this has caused me to realize that there are so many people in this country that don’t have that luxury.’ 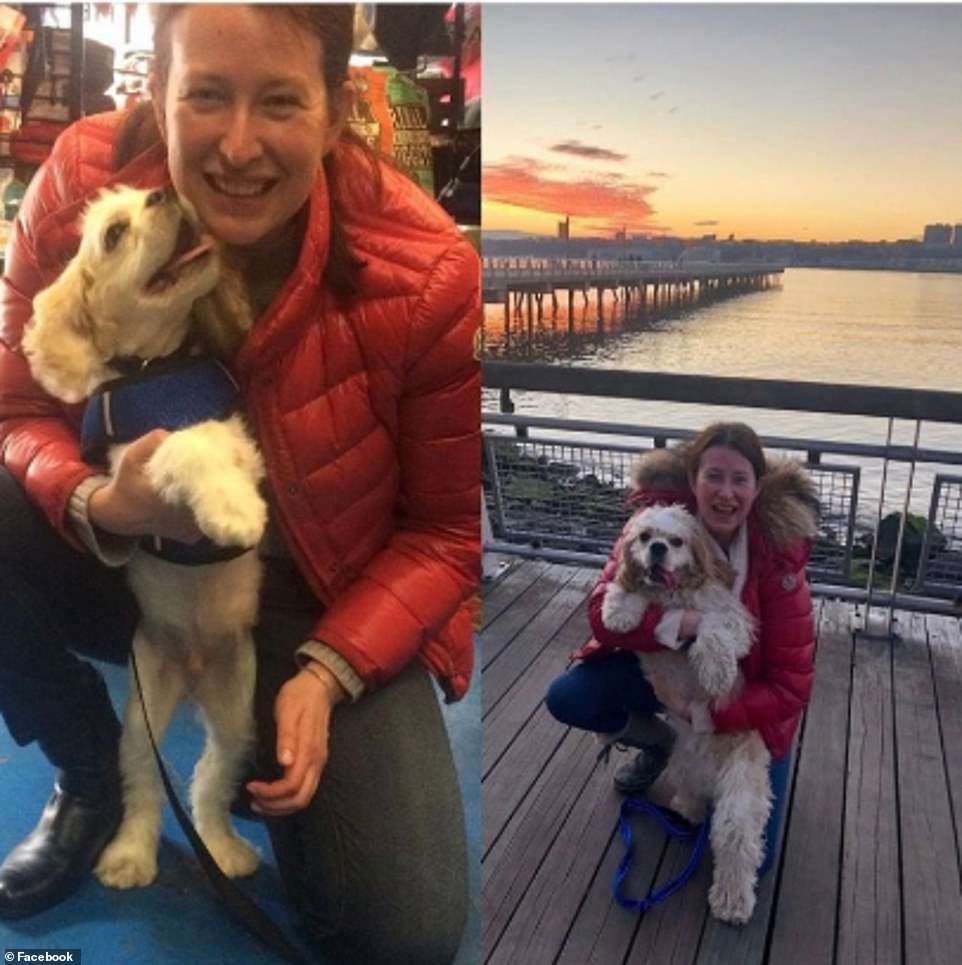 On Monday night Amy Cooper apologized to ‘everyone, especially to that man, his family’

dog, her, of, walking, White, woman
You may also like: