WHO reports record daily increase in global coronavirus cases, up…

Another global coronavirus record is broken as a staggering 212,326 people are diagnosed with Covid-19 in a DAY, World Health Organization confirms

A record 212,326 new cases of the coronavirus were diagnosed worldwide on Saturday July 4, according to the World Health Organization.

June was the most devastating month for the global pandemic and saw cases top 10million and deaths surge past 500,000.

The 10million milestone was hit only last Sunday and the total has since risen to 11.3m, meaning more than 1.3million people have been diagnosed in a week.

Although many countries in Europe are now emerging from the worst days of the global crisis, the pandemic still rages on in the Americas and Asia. 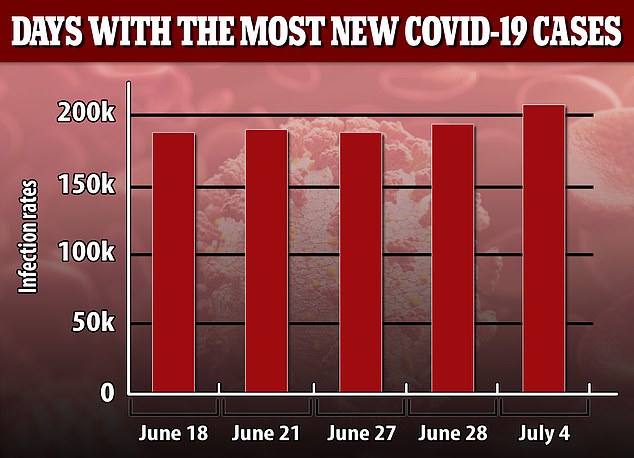 The pandemic is now rattling through statistical milestones as it enters its sixth month – in no small part because it has taken hold in the world’s biggest countries.

China, the most populated country in the world, managed to keep a lid on its epidemic early on, if its data is to be believed.

But the next largest populations are all now starting to feel the effects of the global crisis.

The US, which has the third biggest population in the world (331million), is bearing the brunt of the global Covid-19 outbreak.

Brazil is the sixth most populated country (212million) and is fast becoming the global hotspot for Covid-19. Cases there have soared to 1.57million and 48,105 were recorded yesterday alone, according to the World Health Organization.

India’s population of 1.38billion people (second globally) are also starting to see the virus spread rapidly among them – there have now been 673,000 in total and were 22,771 yesterday.

Russia is the only other country to have more than half a million cases, with a total of 680,283. Its population is ninth largest in the word, with 146million people.

There have been more than 11million coronavirus worldwide to date and the 10m milestone was hit only one week ago, on Sunday July 5.

The WHO said there have already been more than double the number of Covid-19 cases than the number of severe flu cases the world would see in a normal year.

When the world passed the 10m mark last week, Sir Jeremy Farrar, a leading scientist advising politicians in Britain, said even the harrowing official figures are ‘in reality underestimates’.

He said in a tweet that the figures were ‘sobering’.

Daily, incre, record, reports, Who
You may also like: