A good lawyer is worth his or her weight in gold, which is precisely what they usually charge.

The legal fraternity, like outlaw bikies and mafia goombahs, run a closed shop controlled by secret rules and ancient rituals not to be broken.

Barrister turned police informer Nicola Gobbo broke those rules and has been condemned by her former colleagues (some desperate to reinvent themselves as squeaky clean). 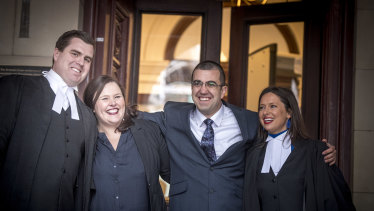 Faruk Orman (third from left) with Ruth Parker (second from left) on the steps of the Supreme Court after his conviction was quashed.Credit:Eddie Jim

A lifetime ago I wrote a story alleging that a serving and trusted NSW detective advised drug boss Bob Trimbole to disappear overseas to avoid giving evidence at the 1980s Stewart Royal Commission into drug trafficking.

As a result Justice Don Stewart invited me to give evidence, where I told him the conversations were recorded on illegal police phone taps.

I would have been sunk, except that the eagle-eyed lawyer assisting Stewart spotted that the documentation bore the policeman’s present rank – one he had attained after Trimbole fled. In other words, he had faked the paperwork.

The cop took his notes, left the witness box and promptly resigned.

Standover man turned author Mark Brandon “Chopper” Read was a good judge of a lawyer’s talents, having employed many during his colourful career.

In the ultimate act of affection he named his kelpie-bull terrier cross, Kayser, after barrister Boris Kayser. To be balanced, he named his greyhound after the prosecutor who sent him to jail. The lawyer proved to be quicker than the dog.

Killer Victor Peirce was so grateful at the balanced way Justice Frank Vincent presided over the trial where he and three mates were acquitted of the 1988 murders of two policemen in Walsh Street, South Yarra, that he named his son Vinnie after the judge.

As a barrister Vincent was the defence lawyer of choice when it came to homicide defences, and yet he along with John Coldrey (later Justice Coldrey), Dyson Hore-Lacy, QC, and others would leave lucrative Melbourne to defend the downtrodden in the Northern Territory.

When Mick Gatto was acquitted of the murder of contract killer Andrew Veniamin in 2005, he said: “Thank God for the jury system, thank God for Robert Richter, a top barrister.”

So impressed was Gatto with Richter’s work that he had his name tattooed on his chest.

I spent some time at the Police Club where off-duty detectives would bag Richter, QC, after he turned them into pretzels in the witness box. I saw the same detectives buying him drinks after he had a couple of them acquitted on serious charges. There can be no greater compliment for the lawyer they call the Red Baron. 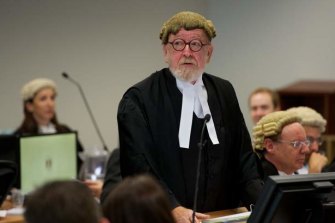 When it comes to getting answers about investigations into lawyers, you would have more luck sending an FOI request to the KGB on their use of poisoned umbrella tips.

There is a case in the civil courts looking at questionable legal fees worth millions. It was a rort on a tort that couldn’t be taught.

So far two barristers connected to the case have handed back their tickets and two lawyers have taken their own lives. When we politely asked the Legal Service Board if they had launched an inquiry into these shenanigans, we were told they couldn’t possibly say.

Despite the case centring on allegations of potential fraud, when we checked it had not been referred to police.

The Board this week struck with sloth-like speed, asking the Supreme Court to strike Gobbo from the bar roll – 14 years after they first received a complaint about her. This is the equivalent of cancelling Great Train Robber Ronald Biggs’ gold pass. 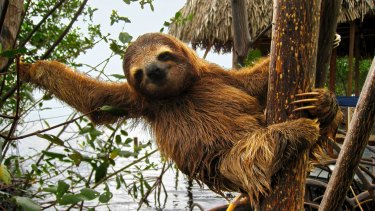 A sloth not heading to the Supreme Court.Credit:Shutterstock

The Gobbo royal commission has run nearly two years and while the lawyers have earned millions in fees the witnesses have been provided with $12.40 a day in lunch money.

If the lawyers at the inquiry are allowed a COVID-compliant farewell dinner, I would strongly advise any caviar-filled sturgeon to head into witness protection. 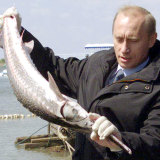 It wasn’t that long ago that there was a whiff of hypocrisy around the big end of town. Many influential figures in policing, the law, politics, media and the church saw it as their duty not to rock the boat.

An old-school judge who repeatedly railed against homosexuality had to be “talked off the ledge” when he was caught, not once but twice, taking a midnight stroll in parklands frequented by lonely gentlemen in search of companionship.

A respected government solicitor destined for higher office recommended against the prosecution of a powerful institution (in this case a newspaper), quoting the words of a judge in an appeal judgement as proof the case would fail. Unfortunately he was quoting the dissenting judge.

One powerful judicial figure was at a formal police function when he recognised a portrait on the wall as of a man who many years earlier on a brisk afternoon had invited him into his warm car as he was heading home from school. That senior officer later helped sabotage an investigation into a paedophile ring.

A notoriously inflexible judge was found to be surprisingly physically flexible when discovered in the back seat of a Mini Minor in a state of undress with a female companion in a similar state.

Good criminal lawyers can give their clients, no matter how odious, the best defence available without compromising their morals.

Others act as accessories after the fact. Following the 1976 Great Bookie Robbery, gunman Ray Bennett’s mother collapsed in a lawyer’s office. When her clothes were cut away for first aid they found $90,000 in cash in her undergarments.

Another gang member, Normie Lee, laundered $110,000 through a solicitor’s trust fund – carrying $60,000 into the office in a plastic garbage bag.

One colourful lawyer was seen opening his jacket to produce bundles of cash while purchasing a luxury sports car. Perhaps he backed a long shot in the last.

Then there are those who are just criminals.

Philip Peters, a former Crown and State Treasury solicitor, was known in the underworld as Mr Laundry – and not because of the state of his shirts.

In 1994 he was arrested over a plan to drug and abduct Peter Kypri, the man he believed to be responsible for scamming him in a $200,000 insurance fraud.

He was jailed for attempted abduction, perjury and cultivating marijuana. He has also been questioned over the murder of Jane Thurgood-Dove, who in November 1997 was shot dead in front of her three children in Muriel Street, Niddrie.

Don Campbell was by day a combative lawyer and by night a prodigious factory burglar.

He became a police target after a truckload of stolen toys from Toy Kingdom in Heidelberg, valued at $50,000, turned up at an amphetamines producer’s farm.

Undercover police bought the toys for $16,500 at a Richmond meeting and Campbell helped load the toys onto the detectives' truck.

In 1995 he was convicted of trafficking in amphetamines and stealing property valued at $150,000. He was sentenced to two years and nine months' jail with a minimum of 18 months.

A character well known in legal circles was George Marcus, who for more than 15 years was a solicitors’ process server and office manager before he struck out on his own in 1995 to offer “consultancy advice” to legal and financial firms.

After he was shot dead in Box Hill in 1997 he was found to have associated with the notorious Chaouk crime family, to have been heavily in debt and to have possessed more than $16 million in fake US cheques. He had also been informing to the Australian Federal Police.

Every profession has skeletons in the closet. The question is who is brave enough to open the door?