A terminally-ill widow faces losing her home in a £268,000 High Court inheritance fight with her ‘affluent’ stepdaughter.

Wheelchair-bound Maria Seviour, 56, enjoyed a 17-year marriage to husband Colin Seviour before his death from brain cancer in 2016.

When he died, Colin left everything he had to Maria, who has motor neurone disease, the condition which killed Prof Stephen Hawking.

But disagreements over his funeral led to a family feud, with Carly Shapton, 32 – Colin’s daughter by his first wife – now suing Maria for a slice of her father’s money.

Ms Shapton, a Swansea hotel marketing manager, says it was ‘unreasonable’ for her father – with whom she enjoyed an ‘incredibly close relationship’ – leave her nothing.

The married mother-of-two claims she should get £75,000 from the £268,000 estate, so she can buy a new house big enough for her children to have their own rooms and for her husband to have a home office.

But Maria says that anything awarded to Ms Shapton could force her to sell her £500,000 home to pay her stepdaughter off. 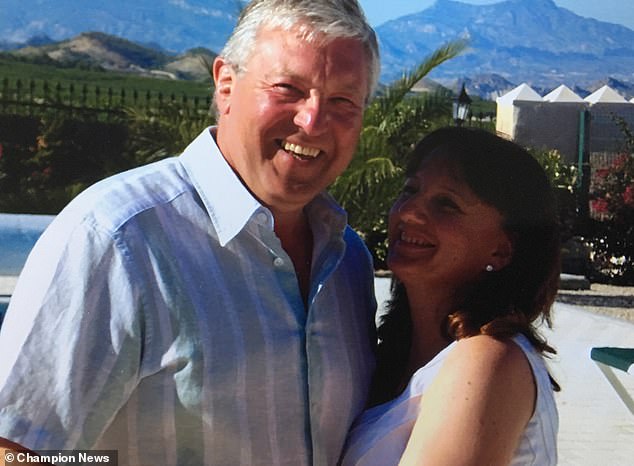 Maria Seviour (right, with husband Colin before his death) is being sued by ‘affluent’ stepdaughter Carly Shapton for £75,000 after disagreements over Colin’s funeral

Maria’s lawyers told London’s High Court that Ms Shapton enjoys ski holidays and has everything she needs to live a good life.

By contrast, Maria suffers from devastating disabilities and cannot work.

‘Due to her MND and consequent inability to work ever again, she has no earning capacity and only a modest income, mainly state benefits,’ said lawyer Alan Johnson.

Her only major asset is the house, which has been adapted for her disability and already been mortgaged to contribute to the cost of her full-time carer, he said, adding: ‘Maria needs all her assets to provide for her future financial needs.’

Ms Shapton’s barrister Zachary Kell claimed that, in leaving everything to his wife, Colin had not made ‘reasonable provision’ for his daughter.

‘The relationship between Colin and his daughter was incredibly close,’ he told the court. In the last few months of Colin’s life, Carly was camped out by his bedside.

‘She was desperate to spend his last moments together.’

Ms Shapton had even fast-tracked her wedding to her now husband, Jake, in order for her father to be able to attend, said Mr Kell.

‘The estate leaves nothing to Carly and, looking at the relationship between her and Mr Seviour, this is not what he had in mind for his estate,’ he argued.

He said both Colin and Maria had planned to ultimately leave their estate to the four children when they both died, but that after Colin succumbed to his cancer, Maria had changed her mind and written Carly and her brother out of her will.

Pictured: Carly Shapton outside London’s High Court after hearing in battle over a slice of her father Colin Seviour’s estate

Judge Stephen Lloyd was told that both Colin and Maria had had previous marriages when they met and began a relationship in the mid-1990s.

They moved into the home Maria had shared with her ex-husband in Radstock, Somerset, with her two children, Briony and Christopher Thatcher.

Colin died in 2016, two years after he was diagnosed with brain cancer.

Mr Johnson told the judge the court fight between the two women is a ‘sad case where a family has fallen out.’

Although there had been bad feeling in the run-up to Colin’s death, things worsened at his funeral when, despite having been married to Colin for 17 years, Maria was left out of a eulogy in favour of his first wife, Carly and Christopher’s mother.

The eulogy had been delivered by Christopher Seviour, the judge was told.

Maria, who was already suffering symptoms of MND at the time, was ‘deeply hurt’ by that move, said Mr Johnson, and the family rift has only widened since then. He argued that there is ‘plainly no need for maintenance’ for Carly, who lives in The Mumbles, one of the most affluent areas of Swansea.

‘Carly and her husband own their own home and have a good – well above average – income and a comfortable lifestyle,’ Mr Johnson told the judge.

‘Commensurate with their income, Carly and Jake live a comfortable and indeed relatively affluent lifestyle. For example, they enjoy regular winter and summer holidays, which have continued since having children.

Maria, on the other hand, lives in an ‘extremely unfortunate situation,’ suffering from a ‘terminal and worsening disease.’

‘Colin plainly owed an obligation and had a responsibility to Maria,’ he said.

But Mr Johnson said the majority of the estate was tied up in Colin’s share of the home, insisting that Maria would have to mortgage or sell the property.

The judge has reserved his decision in the case, which he will give at a later date.