Grieving widow, 73, in self-isolation is forced to say her last goodbyes to her husband of 35 years from the window of her home as his hearse is driven past during funeral she can’t attend

A grieving widow had to say her last farewell to her husband from the window of her home as his hearse drove slowly by.

Susan Cadogan, 73, was not allowed to attend her husband Peter’s funeral because she has lung problems and is self-isolating.

The great-grandmother said: ‘I thought I had no tears left in me, I cried so much when Peter was ill and when he died.

‘I promised myself I would be strong but when I saw the hearse the tears started flowing again.’ 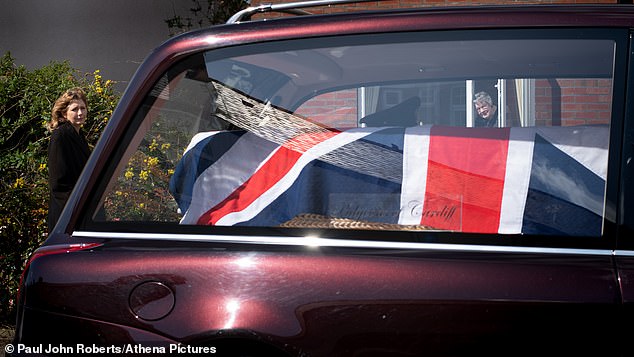 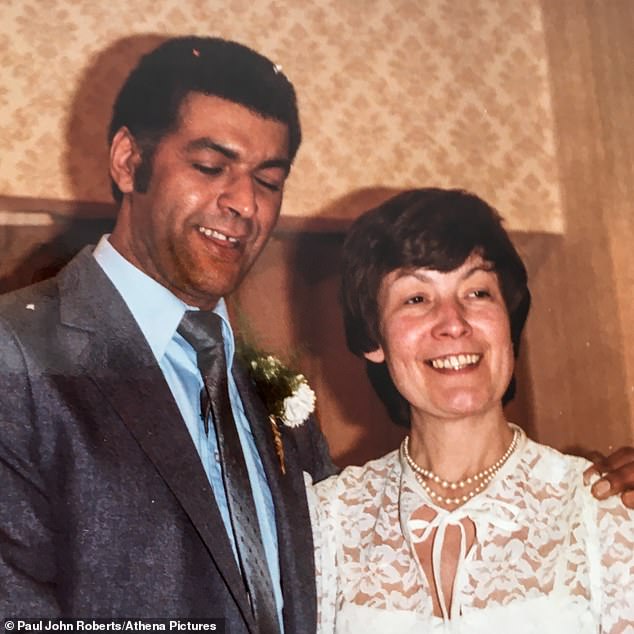 Peter Cadogan with wife Susan, seen together on their wedding day 35 years ago

Susan, who suffers from COPD and is on oxygen, praised the undertakers for the dignified drive past her first-floor apartment in Canton, Cardiff.

She said: ‘They were very kind and it was quite beautiful in a way.

‘We wanted to give him a traditional send-off with friends and relatives talking about him and hugging each other after the service.

‘But families can’t do that any more although we can still have virtual hugs.’

Former soldier and lorry driver Peter, 75, died of cancer on March 2 with his family at his bedside. He and Susan had been married for 35 years.

They cancelled a full memorial service at the St Francis of Assisi Church in Cardiff where Peter enjoyed singing and playing the guitar with the church choir.

A wake for a large group of family and friends in a local pub was also stopped because of the coronavirus restrictions.

Peter’s stepson Paul Roberts and his wife Lynn were the only two mourners at Thornhill Crematorium, on Tuesday.

A short service was due to be streamed live but due to a technical issue, Susan wasn’t able to see it.

Paul, 55, said: ‘It was a sad day and very difficult for my mum but it was too much of a risk for her to attend.

‘I arranged for the funeral directors to drive the hearse with Peter in it to my mum’s apartment so she could say goodbye and see him off on his final journey.

‘She was upset and sadly she’s been unable to have the arms of her loved ones around her when she needs it most.’ 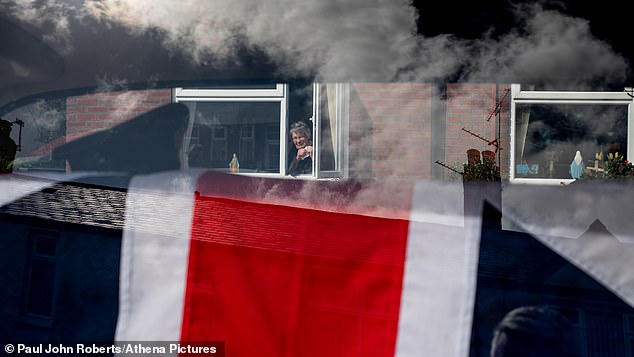 Peter kept his army uniform in tip-top shape all his life and his cap was placed on his coffin which was draped by the Union Jack.

Photographer Paul captured the drive-past on camera and Susan gave her permission for the moving images to be published.

She and her family say they wanted to show other families who are not allowed to attend their loved-one’s funeral during the Covid-19 crisis that there are still dignified ways of saying goodbye.

Paul said: ‘Being able to say goodbye to loved ones in the traditional ways will be a growing challenge for people as time goes on if social distancing becomes more stringent.

‘We did what we could, it was very emotional, but at least my mum has a memory of her husband’s funeral.’

forced, Goodbye, is, say, to, Widow
You may also like: