By the time you read this, little Alfie Evans might have died. Or he might still be clinging on to a thread of life, locked in his tiny world.

His life-support system was removed on Monday, against the wishes of his parents. Over the following days, judges listened to expert advice, then refused parental appeals to allow the stricken boy to fly to Rome.

There he would be treated in the Vatican children’s hospital with the support of the Pope, even though there was no promise of a cure and no hope of a cure. Only of a miracle, God willing.

However, even the kindest, logical reflection would consider this unlikely. Alfie, 23 months old, has a neuro-degenerative disorder so rare that it doesn’t even have a name. He has been in decline since a seizure when he was seven months old. 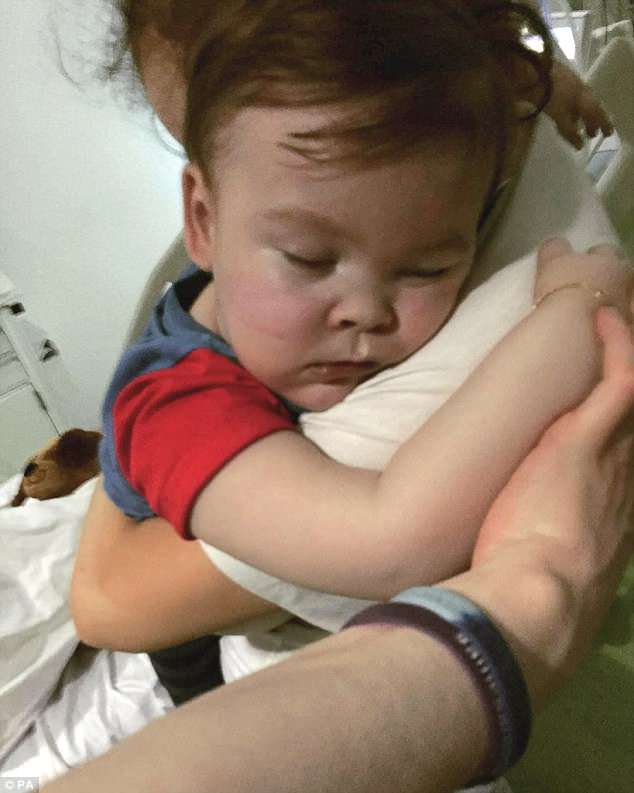 lfie, 23 months old, has a neuro-degenerative disorder so rare that it doesn’t even have a name

An MRI scan in February 2018 revealed his brain had deteriorated to the point where it was beyond recovery and ‘appearing almost identical to water and cerebrospinal fluid’. That is a stark and horrifying fact. The white matter of his tiny brain is almost all liquid.

Yet just like Charlie Gard last year, his living and his dying have been the subject of passionate debate, with both sides utterly convinced of the righteousness of their position.

Alfie’s young parents, Tom Evans and Kate James, have managed to convince themselves and their supporters that the Alder Hey hospital in Liverpool where he’s been treated for 15 months is not fit for purpose. Even worse, medics there were colluding in nothing less than the ‘murder’ of their son by switching off his ventilator.

‘Their behaviour,’ said Evans, ‘has been disgusting.’ Last night, he seemed to be in a more conciliatory mood, talking of ‘building bridges’ with the medical staff he has castigated. All the couple want now is to be able to take Alfie home, and one hopes this wish is granted. 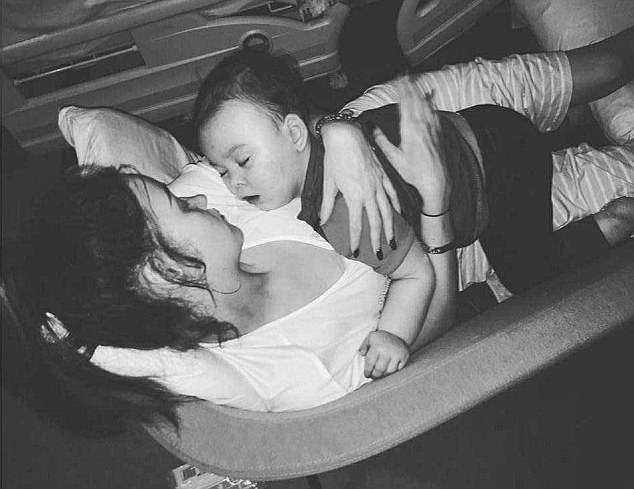 Alfie’s young parents, Tom Evans and Kate James, have managed to convince themselves and their supporters that the Alder Hey hospital in Liverpool where he’s been treated for 15 months is not fit for purpose

Yet this has been a terrible affair, this tragedy of a sick and dying baby turned into a circus by those who should know better. Supporters who call themselves Alfie’s Army protested outside the hospital, threatening violence and necessitating a police guard on the front doors. Doctors and nurses feared for their own safety, while one nutcase even threatened to ‘burn down’ the building.

Tom Evans says that he did nothing to encourage these protesters and peddlers of misinformation, but to be fair he did little to discourage them either. Alder Hey just wouldn’t listen to them, he said this week. Meanwhile, the furious battle for hearts and minds online continued.

At my hairdresser’s in London on Tuesday, Emma the shampoo girl wanted to talk of nothing else but Alfie. She had been following every step of events on social media, where she has become another follower convinced that this baby boy is the plaything of brutal medics who want him dead.

The doctors and nurses at Alder Hey? They didn’t know what they are doing. They had switched off his ventilator on Monday, but Alfie was still breathing. 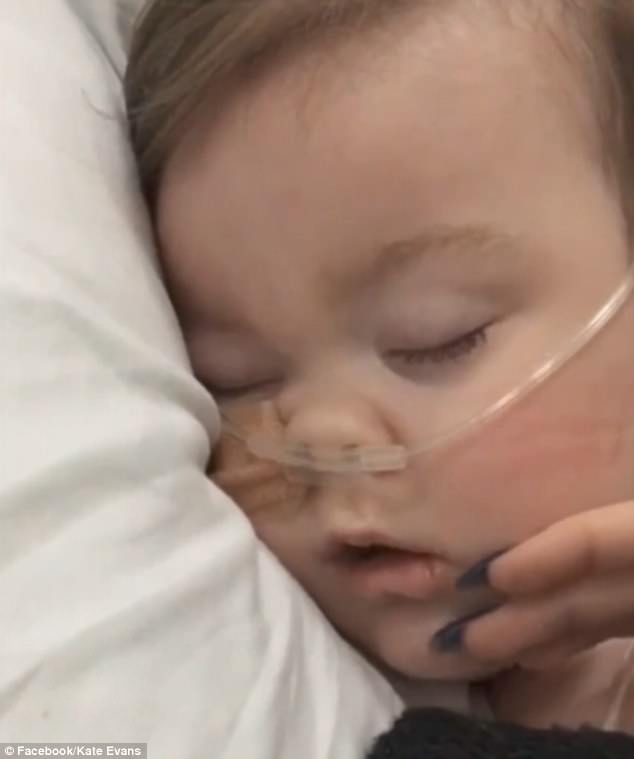 Showed how much they knew! The baby was a fighter, an angel, a champ — but he was still doomed ‘because the hospital are going to kill him by lethal injection, I read it on Instagram,’ she said, near to tears.

What? Emma, I promise you, that is not going to happen, I told her. ‘But it is,’ she insisted, scrolling through her iPhone. ‘It says it right here.’

All of these accounts, many with 200,000-plus followers, have used the emotive videos and photographs posted by his parents of Alfie lying in his hospital crib. One of them shows him sticking out his tongue. ‘He is not DYING he is IMPROVING,’ informs the desperate message alongside.

Emma the shampoo girl was keen on a video of Alfie’s mother poking her son’s chin to show that he does react to stimulus. It was heart-rending, but not convincing. Not to me, at any rate.

To Alfie’s Army, however, it was further proof that the only barrier to his recovery was those employed to look after him, who were acting in collusion with the judges to ‘kill’ him. Good grief. Another conspiracy from the authorities, and this one over the fate of a desperately ill tot?

Conspiracy theories are comforting for those without the intellectual capacity to accept the randomness of the world.

They prefer to think events are controlled by a secret cabal forever plotting against them.

By putting two and two together to make eight, people convince themselves they are in the right, and find a willing audience and a welcoming forum for all this nonsense online.

They fail to see that in moments of crisis, when social media’s power increases, distortion follows, and that distortion has consequences.

Across Facebook, Instagram, WhatsApp and Twitter, Alfie’s Army rampaged onwards. An Alfie petition page with 200,000 signatures begged the Queen to step in to save his life.

A foreword written by his father insisted that doctors plan ‘to kill Alfie on an appointed hour by withdrawing his life support; and for the day and hour of that killing to be kept secret from the public to avoid any protest or hindrance’.

Elsewhere, the rhetoric is feverish, frightening. The smoke of treachery is in the air, fanned by the flames of desperation and ignorance.

Someone suggests that ‘Prince William is capable of flying him to Italy himself, he is an air ambulance pilot’. Another reads: ‘Kim Kardashian, can you help?’

If the truth is something they don’t want to hear, Alfie’s Army simply choose to ignore it.

Meanwhile, the legal rows, the court appearances and the audience with the Pope have not helped.

They have given Alfie’s poor, benighted parents the illusion of a battle they can fight, perhaps even win. Like me, like everyone, they wish Alfie could be saved.

Their refusal to accept medical evidence has pitted them against the hospital and provided them with a handy enemy in clear sight — an enemy that is easier to rail against than the unwinnable odds that are the reality of their situation.

The impulse to do something — anything — for their sick child is only human. That excuses them their desperate actions. However, it does not excuse the dolts in Alfie’s Army for abusing and threatening doctors and nurses.

Not now, not ever.

When she was only 29 years old, Dr Kate Granger was diagnosed with a rare form of cancer.

She died four years later, in 2016, but had time to plan a few things.

Reflecting the plot of Cecelia Ahern’s best-selling book, PS I Love You, Dr Granger prepared cards and letters to her husband, for him on significant dates in the future. He has just opened the most recent one for his 40th birthday, in which she wonders if he still has ‘a full head’ of hair.

This lovely and understandable gesture of hers is not uncommon. I have heard many similar stories. Yet however loving the intention, are these missives from the grave really in the best interests of the surviving partner?

In a way, they don’t let the grieving spouse move on. And however unintentionally, they peel open wounds that might be tentatively healing.

Yes, a letter kept for a child’s wedding day is a precious thing.

But rather than a ribbon of letters to your other half stretching into the future, wouldn’t it be kinder just to let them get on with it?

If only rank stupidity was a crime 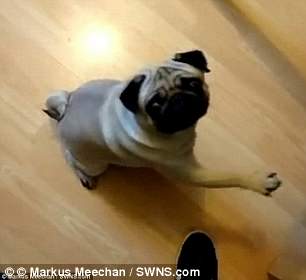 Mark Meechan was convicted of a hate crime last month, for teaching his girlfriend’s dog to respond with a Nazi salute

Please tell me you haven’t donated to Mark Meechan’s charity page, which has raised £100,000 to appeal a court conviction?

The idiot was convicted of a hate crime last month, for teaching his girlfriend’s dog to respond with a Nazi salute when prompted by statements such as ‘Heil Hitler’ and ‘gas the Jews’.

Buddha the pug’s obedient salute has been viewed more than three million times by morons on YouTube. At his sentencing, Meechan said that he would appeal his £800 fine and conviction, because he believed it set a dangerous legal precedent against freedom of expression.

Come off it, mate. What a pity that ‘rank stupidity’ and ‘wilful removal of canine dignity’ aren’t also crimes, because he would be guilty of those charges, too.

Meechan is from Coatbridge, in Lanarkshire, and wears ear-stretching jewellery.

Apparently, when prompted by statements such as ‘time for beddy byes’ and ‘here come num-nums’, he bursts into tears and fills his nappy.

But nobody wants to see that on YouTube, thanks all the same.

Girls who still want to rock around the clock

Like Doctor Who, old rockers never die. They seem to regenerate by going out with ever-younger women. This week, two girlfriends were vying for the attentions of ancient priapic love lizard Mick Jagger.

Meanwhile, Don McLean, 72, of American Pie fame, is currently getting a slice of the action with Paris Dylan, the 24-year-old he originally hired to manage his social media accounts. Quicker than you could swipe right, the unlikely couple had become an item.

Don McLean (left), 72, of American Pie fame, is currently getting a slice of the action with Paris Dylan (right)

Superfan Dylan says she still watches her Don McLean videos three times a day. Good to know she is with him for love, not money.

Especially as Don is playing at the Pavilion in Southend, Essex, on Sunday, which isn’t exactly three sell-out nights at Wembley, no?

Will the new Prince of Cambridge wear George’s hand-me-downs? You can bet your last pair of pin-tucked rompers and darling soldier tank-tops he will.

Kate has already had her first-born togged out in William’s old bloomers. The new boy hasn’t a hope.