A column in The Australian Financial Review suggesting a businesswoman "set fire to other people's money" was witty and exaggerated and would not be read as suggesting she deliberately lost money, the publisher's barrister has told the Federal Court.

Elaine Stead, former managing director of venture capital at the now-defunct fund manager Blue Sky Alternative Investments, is suing the Financial Review and its US-based Rear Window columnist Joe Aston for defamation over two columns between February and October 2019 and a tweet by him in October that year. 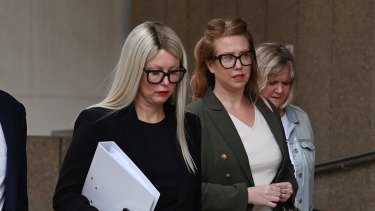 Elaine Stead, centre, and her sister Olivia, right, outside the Federal Court in Sydney on Wednesday.Credit:Nick Moir

The first column labelled Dr Stead a "feminist cretin" who made "fatuous investments in peanut start-ups", pointing to successful online wine retailer Vinomofo and ill-fated bespoke shoe retailer Shoes of Prey, while the second suggested she was a "venture capital pyromaniac" who "set fire to other people's money".

Dr Stead alleges the publications convey a range of defamatory meanings, including that she is "cretinously stupid", "made stupid investments in two worthless companies", "deliberately destroyed the capital of business ventures with which she was associated" and "wantonly lost millions of dollars entrusted to her".

The media outlet and Aston argue the meanings are not conveyed. In the event Justice Michael Lee takes a different view, they seek to rely on a defence of honest opinion.

Sandy Dawson, SC, the barrister for the Financial Review and Aston, argued in court on Friday the words "fatuous" and "peanut start-ups" were "classically the language of opinion" and the expression "set fire to other people's money" did not suggest Dr Stead deliberately destroyed capital or wantonly lost millions.

The column was written in a "witty and exaggerated way", he said, and any attempt to "squeeze out of that some absurd notion she did it all on purpose" should be rejected.

Barrister Sue Chrysanthou, SC, acting for Dr Stead, replied the column was a "hit job on my client" and readers would believe it suggested she was "despicable".

During cross-examination, she agreed she was reprimanded in 2018 by former Blue Sky chief executive Kim Morison about posts on her private Twitter account, months before that column was published.

The same month, Aston had written another column about Blue Sky, which is not the subject of the defamation case, pointing to some of Dr Stead's tweets, including "Lowest of lows today" and "OMFG I just heard the best news but it's a secret!"

The court heard an investment adviser at Ord Minnett emailed Mr Morison in May 2018 suggesting the company stop her tweeting from her private account.

"Yes, we've done what we needed to do. Elaine no longer has a Twitter account," Mr Morison replied.

Earlier in 2018, short-seller Glaucus Research had published a note highly critical of Blue Sky, although not of Dr Stead specifically, leading the company to be hyper-vigilant about social media posts.

Catch all the day’s breaking news