A football supporter has been banned from games for four years after making monkey gestures towards Chelsea striker Tammy Abraham after he scored a match-winning hat-trick before launching an ‘astonishing quantity’ of spit at away fans.

Molineux season ticket holder Josef Smith was sitting with his 70-year-old mother during the club’s 5-2 home defeat to Chelsea on September 14 last year when he ‘curled his fists under his armpits in a chimp-like gesture’.

The 40-year-old warehouse worker, from Kingswinford, was banned by magistrates from attending football games for four years and handed a £1,450 bill after being found guilty of two public order offences, one of them racially aggravated. 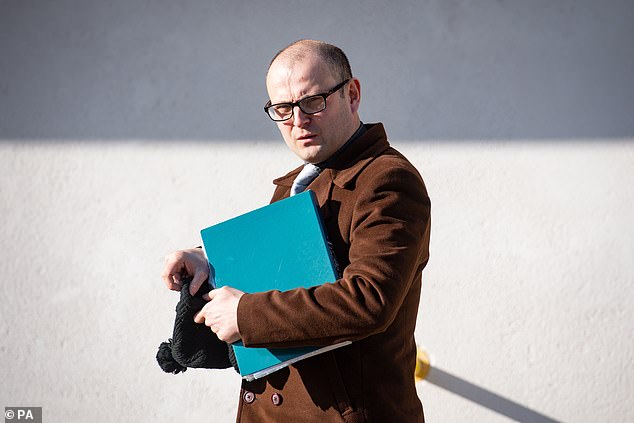 Smith, who denied both charges against him, also suggested that mucus from a ‘bad sneeze’ may have been mistaken for spittle aimed at Chelsea fans.

Dudley Magistrates’ Court heard evidence from two other Molineux season ticket holders, including one who claimed Smith’s gesture appeared to be aimed at black players on the pitch.

Opening the case against Smith today, prosecutor Lynda Gudgeon said he was ejected from the ground after the incident, which was caught on CCTV from three angles.

Ms Gudgeon told magistrates: ‘Officers were called to the Upper Steve Bull Stand to assist in relation to ejecting the defendant.

‘They escorted him from his seat, where he was identified at this stage by three witnesses.’

One of the witnesses saw Smith making monkey gestures and then launching an ‘astonishing quantity’ of spittle from the stand’s top tier into visiting supporters in the lower tier.

Smith, of Kingswinford, near Dudley, was interviewed by police on November 1 at Wolverhampton police station, where he told officers he had ‘no ongoing feud’ with other Wolves supporters.

He also told police he was very frustrated with the scoreline and had stood up and sworn during the game – but had only ‘raised his arms in an upwards direction’ to motivate the Wolves players.

Two witnesses gave evidence to magistrates from behind a screen protecting them from being identified – with one saying he did not believe it was possible that Smith was simply pointing at the pitch.

The man told the court: ‘The Chelsea player that scored happened to be black and he celebrated in front of the Chelsea fans who were below us.

‘As he did that, I noticed a gentleman stood up and curled his fists under his armpits in a chimp-like gesture. It certainly looked as if it was aimed towards the players on the pitch and the goalscorer.

‘I believed it was a racist gesture towards the player.’

Answering questions from his solicitor, David Dorrance, Smith told the court: ‘When the fourth goal was scored, the white shirt number nine ran over to the side and stood on top of the electronic advertising board.

‘The CCTV shows at that point I stood up. There was a reaction to the provocation, but it wasn’t a monkey gesture.’ 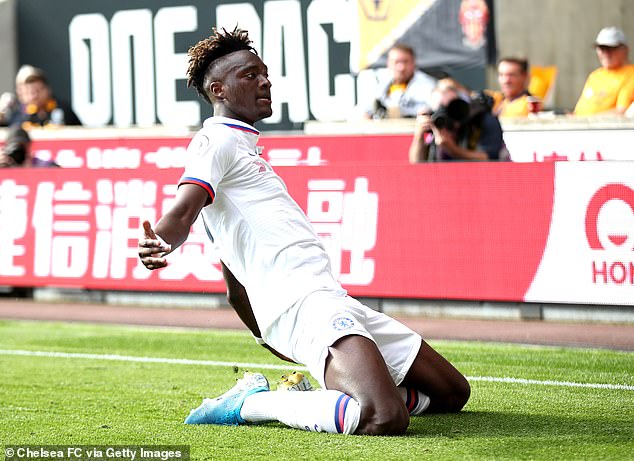 Abraham after scoring a match-winning hat-trick against Wolves on September 14 last year, when he was racially abused by Smith

The court was told that Smith’s mother, also a season ticket-holder, was ‘blameless’ during the incident but no longer attended matches.

Magistrates deliberated for around an hour before convicting Smith of using threatening or abusive words or behaviour likely to cause harassment, alarm or distress and a racially aggravated count of the same offence.

Passing sentence, chairman of the bench Arthur Wheldon told Smith he would have to serve a four-year football banning order.

The magistrates told Smith: ‘We have heard from two Crown prosecution witnesses who had a clear view of you. Both witnesses were adamant as to their recollection.

‘The court is satisfied beyond reasonable doubt that in a heightened state of agitation the defendant spat with force, landing on fellow Wolves supporters.

‘The court is further satisfied you made a deliberately racially-aggravated gesture in response to Tammy Abraham’s celebration… in what has been described as a chimp motion.’

fan, found, gui, is, Wolverhampton
You may also like: