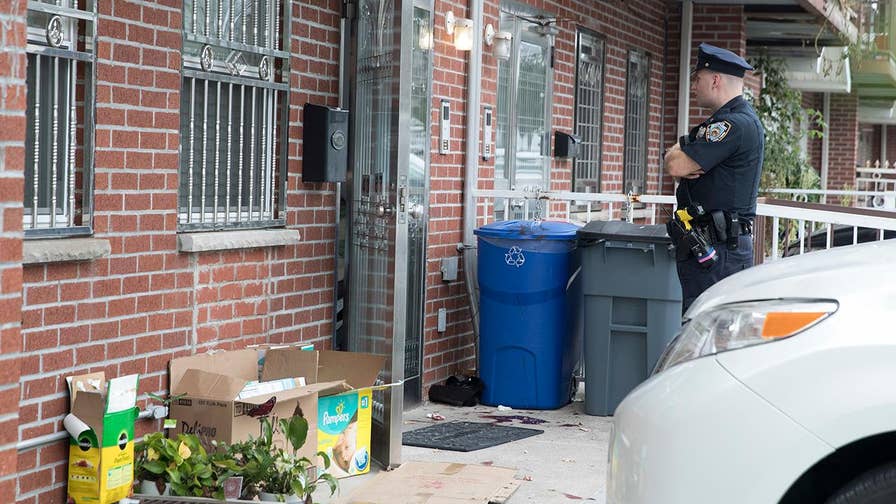 A woman accused of stabbing three babies and two adults at a suspected birth tourism site said she mistook the newborns for wolves.

Yu Fen Wang, 52, told the New York Daily News from Rikers Island she was sorry for the stabbing spree at the residence in the Flushing neighborhood of Queens. Three babies — a 12-day-old, a 32-day-old and a 33-day-old — were taken to the hospital in critical condition after they were stabbed around 3:30 a.m. on Sept. 20. Wang was charged with five counts of attempted murder.

“I don’t know why I did such a thing or what I was thinking about,” Wang said in Mandarin to the New York Daily News. “At the moment, I thought they were not babies, but wolves. So I slashed.”

The house were five people were stabbed overnight is seen, Friday, Sept. 21, 2018, in New York.

“I hope [the babies] didn’t get hurt. I hope they are OK,” added Wang, a grandmother of three.

Wang’s left arm was heavily bandaged due to the self-inflicted cuts when she tried to kill herself after the incident. Police found her unconscious and bleeding in the building’s basement.

According to multiple reports, the building was being used to house pregnant Asian women who sought to travel to the U.S. on tourist visas so their babies could be born and gain U.S. citizenship.

The facility offered month-long intensive mother-baby care called “zuo yue zi,” which roughly translates to “sitting the month,” according to the New York Post. A community source told the newspaper most of the women were from China.

“Ninety percent of them in these centers come from China,” the community source told the New York Post, adding the women were recovering after giving birth in New York. “They don’t advertise. It’s word of mouth.”

Wang said she hopes to “redeem” herself and vowed to never commit “such a mistake” again. She said she wants to go home and take care of her three granddaughters.

Katherine Lam is a breaking and trending news digital producer for Fox News. Follow her on Twitter at @bykatherinelam

Charged, in, NYC, stabbing, woman
You may also like: