‘Yep, that’s a deer’: Cull to reduce the risk of stags in urban areas

There's a coat draped over the Hilux cabin instrument lights because Annaliese Geddes, a senior biodiversity security officer at the wheel, needs to see in the dark.

We're on a dirt track. It's 9.30pm, she's on sidelights and there's not much illumination from a cloud-obscured crescent moon. Our location? We can't tell you. Suffice to say Sutherland Shire, but not in the Royal National Park. 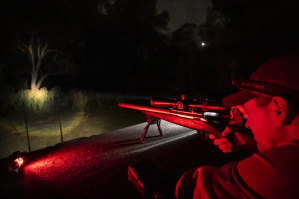 Two men are behind on the truck's rear platform. No camouflage, they are wearing the yellow jackets of the NSW government's Greater Sydney Local Land Services. Their weekly deer cull averages four kills.

Gareth Cleal, the "imager" has night vision binoculars. Objects show as ghostly silhouettes and their distance is displayed. "You'll be scanning and deciding what each object is then you make a decision. No, next one, kangaroo, wallaby, next one, yep that's a deer," he said.

Alongside is Lee Parker, biodiversity leader, with a .223 centrefire bolt action rifle, suppressed (silencer). He's been shooting deer for eight years with a personal total kill of about 1500. 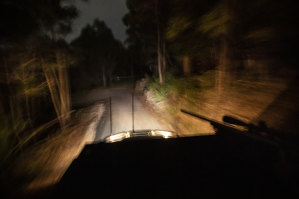 Thermal imaging beats searching for deer in the headlights during a culling exercise with the Local Land Services.Credit:Wolter Peeters

The imager will alert the shooter and driver who positions the vehicle. The target, normally about 100m distant, is then illuminated.

Remember the two deers in early October that went walkabout in Leichhardt at 7am? They were feral rusa deer. Mr Parker thinks instances of city walkabouts will increase due to deer being displaced by new housing. They may have emanated from the Royal National Park where, estimates vary, there may be 2000.

We inch around a bend heading for what has previously proved to be a "hot spot". There's no talking and crickets outside the only disturbance. "Deer sighted to the right" comes over the walkie talkie linking driver and the two behind. There's three deer down below in a gully in what is described as a bachelor group. 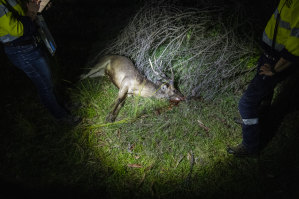 Death is instant and the stag falls on the spot.Credit:Wolter Peeters

The City of Wollongong in a submission to the ongoing Senate inquiry into the impact of feral deer said 91 per cent of the Illawarra community last year agreed deer control is necessary. That's up from 74 per cent in 2012. Of course, there's opposition. "Usually the Bambie factor comes from people that aren't being impacted by deer," Mr Parker said. "These animals don't belong in our bush, they are introduced and they cause havoc to the community."

A whispered request comes from behind to pass through the gate ahead. It's unlocked but the hinges are noisy. Through the gate we await instructions. It's 9.37pm. The flashlight comes on. Then a powerful crack from behind breaks the silence. A deer bounds away out of the spotlight. One doesn't. The deer shot in the head falls on the spot. Total time, about three seconds. 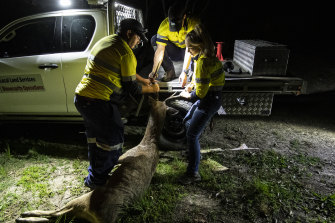 We cruise for another half an hour before returning to pick up the kill. Its position is logged including direction and time of the shot and a DNA sample taken from the ear. The kill is a rusa stag about three years old. A broken point on one of his antlers suggests he was active during the August rutting season.

"We may take them, if there's several, to a wildlife retreat where they get fed to retired lions or big cats but for this particular program the carcasses will get left in situ on site," Ms Geddes said.

Mr Parker, looking at the muscular carcass on the wagon explains the cull. "A lot of it is around environmental impact but also public safety, so they don't keep filtering out into urban areas," he said. "You can imagine, from the size of it, what would happen if it collided with a vehicle."

Friends of Royal National Park in their submission to the inquiry explain the impact of the deer on other flora and fauna. Those visiting the park may not be impacted unless, of course, at 80 km/h they cop a 130kg stag through the windscreen.