A young couple and their three-week-old daughter have been identified as the victims of a suspicious fire that engulfed a Point Cook townhouse in the early hours of Wednesday morning.

Police and arson squad detectives are investigating the blaze that claimed the lives of Abbey Forrest, 19, her boyfriend Indi, whose surname is not known, and their daughter Ivy. 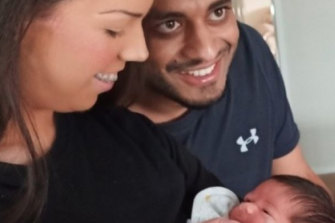 The family had moved to the house, on Totem Way in Point Cook, less than a month ago, after the birth of their daughter.

Neighbours have spoken of how they frantically tried to hurl an axe and throw rocks through the jammed upstairs window of the burning house after they heard screams for help.

Jade Bartolo was awake waiting for her partner to arrive home from nightshift when she heard someone screaming "fire" near her back shed about 3am.

She raced to the house, but could not get into the house from the front or back entrances. "I tried to open the shed, and obviously realised they couldn't get down anyway because of the heat from the shed," she said. 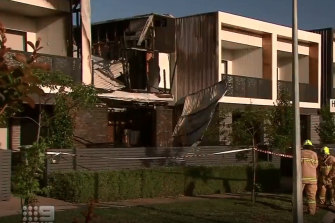 The townhouse was destroyed by the fire. Credit:Nine News

She heard screams from the top storey window. "They were trying to wind the window out, [but] because there's the chain on the window they could obviously only open the window [so] much," she said.

"They were trying to half hang out the window".

Ms Bartolo's partner, who had since arrived home, began hurling the axe at the window from the street.

"It all happened within about four minutes. There was no smoke and then it was just black," she said.

"They were saying 'help, help'.

"(They were) trying to get out the window but they couldn't."

A group of neighbours tried to hurl the axe at least five times before one picked up a rock which shattered the window.

Another neighbour, Kirra Haeata, said she had seen someone who was staying at the home collecting a fast-food delivery outside about 2.30am, believed to be minutes before the blaze started.

"I'd just finished work and the neighbour [from the townhouse] was outside waiting for his food," she said.

Ms Haeata helped go door to door to wake up neighbours in adjacent homes where the fire could easily have spread to.

"It could have just wiped out that whole block," she said.

It took an hour for crews to gain control of the fire.

Arson and explosives detectives believe the fire started in the middle of the home and are treating it as suspicious due to its sheer intensity.

"When the fire services got here, it was fully engulfed, the townhouse was raging, particularly in the front and upstairs. With accidental fires that doesn't occur," said Detective Senior Sergeant Mark Kennedy.

Police have had varying reports of how many people lived at the address. There was a mattress downstairs that looked as though it had been recently slept on, but there was no one on it.

Anyone with information is urged to contact Crime Stoppers on 1800 333 000 or make a report at www.crimestoppersvic.com.au.

And, couple, daugh, newborn, Young
You may also like: