Kendall Jenner stepped out in Las Vegas in a black and white ensemble, featuring a tube top-style dress and matching pants.

Kendall Jenner has stepped out in a sexy mesh ensemble for a night out in Las Vegas. The 818 Tequila founder paired the strapless patterned tube top style dress for the occasion, along with a pair of matching pants. The 25-year-old model took to Instagram on July 10 to share a series of snaps as she headed out for the opening of celeb dining hotspot Delilah.

She posed while standing in the hallway of a luxe hotel suite, later revealing she was joined by her pal Hailey Bieber and husband Justin Bieber, along with her big sis Kourtney Kardashian. In one clip, the trio could be seen dancing, as Justin rocked a Phoenix Suns trucker hat, clearly supporting Kendall’s boyfriend, NBA star Devin Booker.

The Keeping Up With The Kardashians star recently opened up about dating the athlete. “I feel like it’s always worked better for me that way,” Kendall admitted in front of her sisters at the KUWTK reunion. “And no offense to my older sisters at all, but I think that Kylie [Jenner] and I specifically have had the opportunity to watch my older sisters go through marriages and relationships and breakups and all these things and do them pretty publicly.” 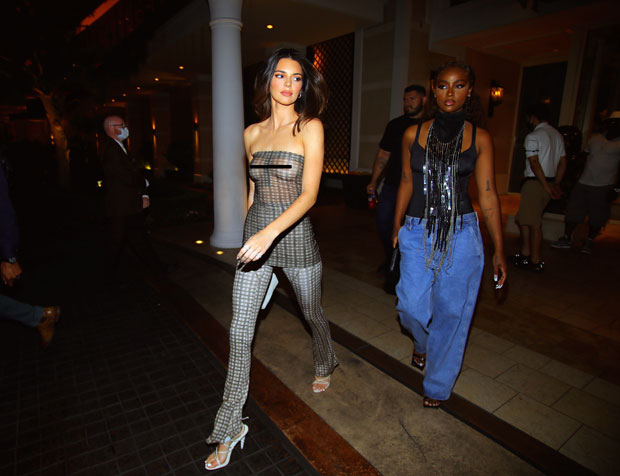 The supermodel emphasized how important it was for her to keep her relationship with her “boyfriend” private despite being photographed with him in the public eye frequently.  “Again, no offense to you guys at all, but I think it was a personal preference from a really young age that I didn’t really want to like… I think it makes my life a lot easier and our relationship a lot better to be completely honest. I just feel like it’s a private matter. It’s not really for anybody else to judge or know.”

During the much-anticipated reunion, Kendall also spoke about the assumption that she didn’t work as hard as others to become one of the highest paid models in the world. “I went to every single casting and ran all over not only New York City but all over Europe trying to get a job and make my way,” she said, noting that she took her last name off of her modeling portfolio.