Megan Fox and Machine Gun Kelly are slowing starting to become one of my favorite couples. They constantly show each other support and I can’t deny that they look pretty darn cute together. Plus, Megan Fox and Machine Gun Kelly’s relationship timeline shows just how much they love one another. Back in January, Fox showed Kelly that she supports his music career after she gave him a sweet shout-out for bringing down the house on Saturday Night Live. "Best performance that show has ever seen," she wrote on Instagram on Jan. 31. And it seems like Kelly is just as enamored with her in return.

The love that these two have for each other is so intense that Fox once compared it to "being in love with a tsunami or a forest fire." As she explained to Nylon during a November 2020 interview, "The intensity of merging with him is just overwhelming, and the threat it poses is so powerful but so beautiful that you have no choice to surrender with reverence and with gratitude." Sounds like they’re in it for the long haul! That’s why this is the perfect time to take a look back at all the incredible moments they’ve spent together.

Fox and Kelly fell in love at first sight when they were working on their film, Midnight in the Switchgrass, and I’m not mad about it. The Jennifer’s Body actor recalled how it happened during her November 2020 interview with Nylon. "I looked into his eyes [and] I felt the most pristine, most gentle, most pure spirit," she said. "My heart shattered immediately and I just knew that I was f*cked."

Kelly apparently felt the same way, too, because in September 2020, he told Howard Stern, "I didn’t know what [love] was until me and her made eye contact. That’s when I was like, ‘Whoa.’ It was my first experience with being open to love and stuff like that. I definitely wasn’t set up to believe that that’s something that could ever exist." Kelly was so smitten with Fox that he said he would wait for her outside of his trailer just so he could "catch one glimpse of eye contact," as he told Stern. Aww.

They Sparked Dating Rumors In May 2020

Romance rumors began swirling in May 2020 when the Daily Mail published photos in which Fox and Kelly appeared to be grabbing takeout together in Calabasas. The sighting seemed suspicious, especially since Fox and her husband of 10 years, Brian Austin Green, were reportedly quarantining separately amid the ongoing coronavirus pandemic.

Green announced he and Fox were separating soon after. On an episode of his podcast, …With Brian Austin Green, he revealed Fox started to become very distant when she left the country to film Midnight in the Switchgrass with Kelly. "She said, ‘I realized when I was out of the country working alone that I feel more like myself and I liked myself better during that experience and I think that might be something worth trying for me,’" he recalled. After Fox told him it was best for them to separate, Green said he obliged because that was "honestly" how she felt.

Two days after Green broke the news, Fox appeared in Kelly’s "Bloody Valentine" music video, and it was the first time fans got to see the rumored couple all boo’d up. In the song, Kelly sings, "I can’t hide how I feel about you inside/ I’d give everything up tonight if I could just have you be mine/ Be mine, baby," and that definitely sounds like he’s talking about Fox. How cute!

Before Fox and Kelly became Instagram official, they took a trip to Puerto Rico with their Midnight in the Switchgrass co-stars, where they reportedly showed a lot of PDA. Director Randall Emmett shared a (since-deleted) cast pic from the vaca on Instagram, and what’s so sweet about the snap was that Kelly’s arms were wrapped around Fox’s waist as he rested his head on top of hers. This photo quickly sparked rumors that the two were dating, and it wasn’t long before Fox and Kelly confirmed their romance on social media and started gushing about each other in interviews.

"I knew right away that he was what I call a twin flame," Fox explained during a July 2020 episode of Give Them Lala…. And Randall podcast. "…So we’re actually two halves of the same soul, I think. And I said that to him almost immediately, because I felt it right away." Soon after, Kelly shared his first photo of him and Fox together. He posted a sweet mirror selfie of them sticking their tongues out, and captioned it, "Waited for eternity to find you again … 🔪💫❤️🔪."

A week later, Fox shared a similar photo on her Instagram account and wrote, "Achingly Beautiful Boy… My heart is yours 🔪♥️🔪." After that picture went viral, Fox’s estranged husband seemingly shaded his ex by borrowing her romantic caption to Kelly. The dad of four shared photos of his kids on Twitter and captioned them, "Achingly beautiful boys … My heart is yours." Shady!

They Made Their Red Carpet Debut In November 2020 Fans got the surprise of a lifetime when they saw Fox and Kelly make their red carpet debut at the 2020 American Music Awards. Kelly adorably put his arm around his lady while she stood next to him wearing a gorgeous emerald green dress with long sleeves. Kelly also looked dapper in his white suit, which showed off his impressive tattoo collection.

They Sparked Engagement Rumors In January 2021

Once they started dating, Fox and Kelly started spending a lot of time together. In December 2020, a source reportedly claimed to Entertainment Tonight that MGK "sees marriage" with Fox in his future. Then one month later, the cute couple sparked engagement rumors when the Daily Mail published photos of Fox seemingly wearing a large engagement ring on that finger. But she shut those rumors down when she shared a close-up of said ring, which — rather than sporting a diamond — said "F*ck you" in bold letters.

They Spent Valentine’s Day Together In February 2021 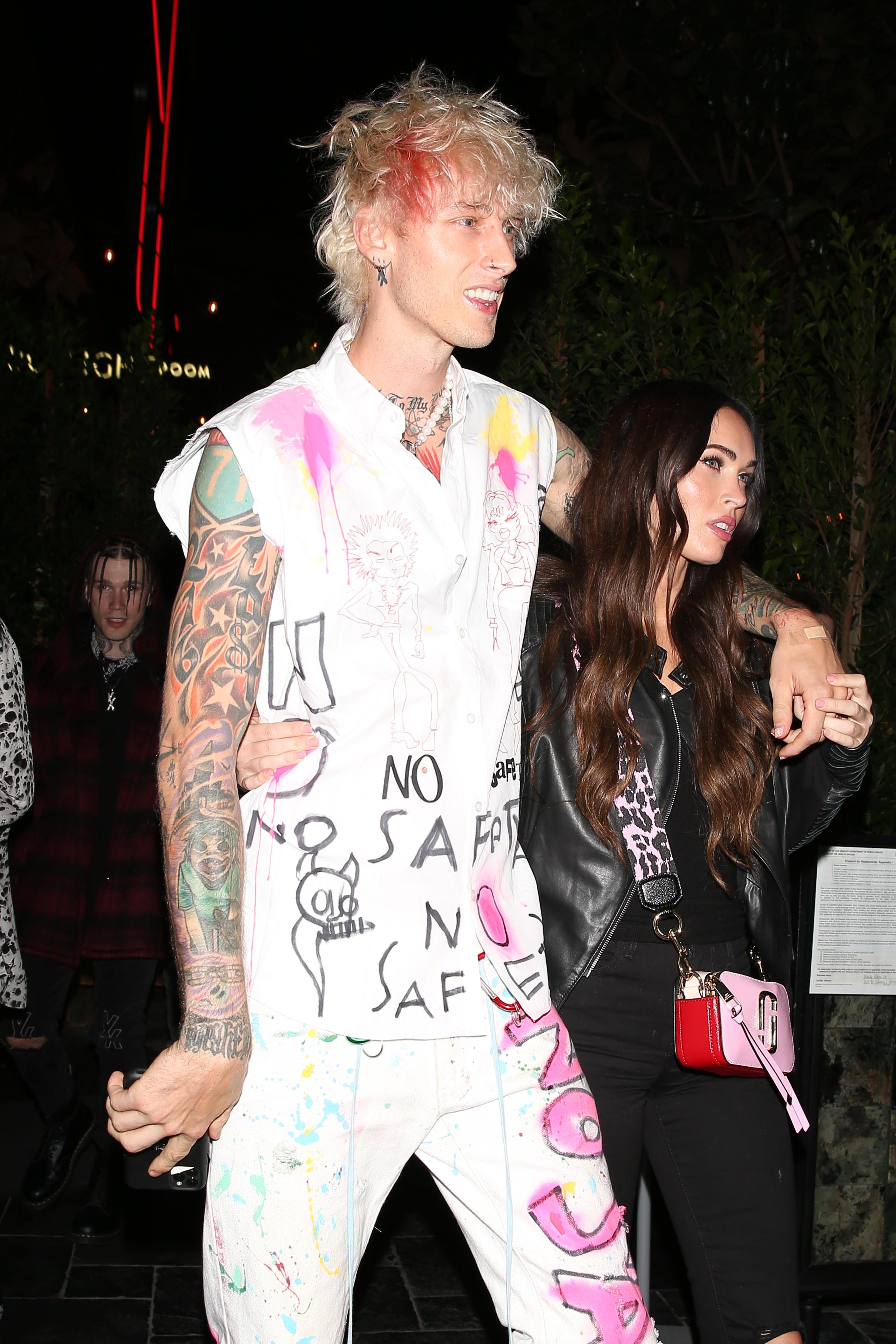 For Valentine’s Day 2021, Kelly shared some adorable pics of him and Fox together, and he also revealed he wears her blood around his neck. The rockstar showed a picture of a pint of blood encased in a glass pendant necklace, and I guess it’s safe to assume he wasn’t joking when he talked about how much he loves the actor.

In return, Fox shared some cute Instagram pics of her and her beau on Valentine’s Day. She captioned them, "There goes my heart, manifest outside of my body, draped in the towering silhouette of a most unusually handsome boy … The journey will likely be perilous, but there is no destination without him. Happy Valentine’s Day rehab barbie ❤️."

There’s no doubt about it: These two are smitten with each other, and I can’t wait to see where their romance takes them.